Porsche Panamera Turbo - What else can you buy at a similar price?

There's a new thrill in store for auto enthusiasts’. Popular global sports carmaker Porsche will launch the Panamera Turbo in India tomorrow. Priced at Rs 1.93 crore, the new model marks the debut of second generation Panamera model in India. The newbie from Porsche will go up against the likes of Jaguar F-Type R Coupe, Nissan GT-R Sport, Range Rover Sport V8 SC Autobiography, BMW M6 Gran Coupe, Maserati Quattroporte and the Audi RS7 Performance in the country. Buyers usually pick one based on their taste or personality, however for those who are still uncertain on which to opt for, we bring out the detailed differences. 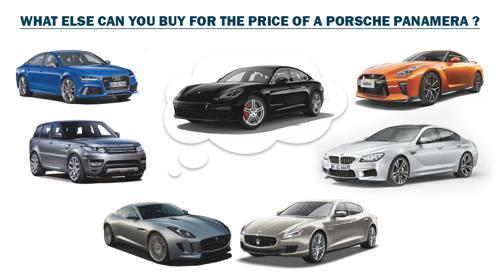 Like its name, the Porsche Panamera Turbo will be fast than its predecessor. Under the hood, the vehicle will be powered by a 4.0-litre turbocharged V8 engine that belts out 540bhp of power and 770Nm of torque. Mated to new eight-speed PDK automatic gearbox and all-wheel drive system, it is capable of sprinting from 0-100kph in about 3.8 seconds. Although most of its competitors generate around similar power output figures, the Audi RS7 comes forth as the most powerful one among the list. The Audi RS7 is powered by 4.0-litre TFSI turbocharged petrol engine mated to 8-speed tiptronic automatic transmission generates 605bhp of power and 700Nm of torque. The vehicle comfortably sprints from 0-100 in just about 3.7 seconds.

Cars from the Porsche production line have always been visually appealing and so also does the new Panamera Turbo. The Panamera will be offered in three trims – Turbo, Turbo Executive and the Sport Turismo. The Panamera Turbo will be launched tomorrow, while the other two will be launched in the following months and will be priced over Rs 2.0 crore. The new model will get Dynamic Light System (PDLS) with dynamic range adjustment, dynamic cornering lights and speed-sensitive headlight range control. Additional features include four-zone climate control with a touchscreen display for the rear occupants, panoramic sunroof, and sound systems by Bose or Burmester. The Range Rover Sport V8 SC Autobiography being the only SUV in the list, it offers a bold rugged stance like none other. Moreover, the Sport V8 is comes forth as a better choice in terms of features as it gets all the right electronics to make driving a pleasure. Among the rest, the BMW M6 Gran Coupe visually appeals with an interesting design and colour options such as - Alpine White, Black Sapphire, Silverstone, Space Grey, Jatoba, San Marino Blue, Sakhir Orange, Singapore Grey and Imperial Blue Brilliant Effect.

The Maserati Quattroporte is for customers who are out there for a car that not just looks premium but also feels premium from the inside. Moreover, the Quattroporte might not be as fast as the rest, but then it has the best exhaust note that instantly connect you to its Italian origin. The new Porsche Panamera Turbo as well as the BMW M6 Gran Coupe offers a fine balance between performance, style and comfort. The Nissan GT-R is all for those who love those extra add-on features like G-monitor and launch-control. As for those who need a full-fledged premium SUV that can handle tarmac as well as off-road bit, nothing comes close to the Range Rover Sport V8 SC Autobiography. Car enthusiasts who are purely focused on the performance aspect, nothing comes close to the Audi RS7 Performance.