The updated Range Rover Sport family of SUVs is now available in India. Like its elder sibling, this too is a mid-life update for this generation of the iconic SUV. The Range Rover Sport competes with the Porsche Cayenne, Mercedes-Benz GLS, Audi Q7, Toyota Land Cruiser and the Lexus NX.

Exterior updates for the car include new grille, LED headlamps, new tail lamps and chunkier bumpers with the integrated exhausts.

Inside, you now get the Touch Pro Duo infotainment system and multiple trim options for all three rows.

The variety of engine options ranging from a 2.0-litre turbo petrol to a 5.0-litre supercharged V8. In the standard car, the diesels’ output is in the range of 255bhp to 335bhp while the petrol goes up to 350bhp. The SVR 5.0-litre V8 has been tuned by the SV boys at Gaydon to produce 570bhp!

Find a list of all 4 petrol and 7 diesel versions of Land Rover Range Rover Sport. This table includes on-road price which covers all costs like RTO and Insurance.

You got to love the subtlety here. No chrome, no over the top badging, and nothing â€“ not even a body kit â€“ that screams â€˜specialâ€™. But, make no mistake this mystic blue coloured Range Rover Sport is no ordinary car. It is the manic but agreeable t

You got to love the subtlety here. No chrome, no over the top badging, and nothing – not even a body kit – that screams ‘special’. But, make no mistake this mystic blue coloured Range Rover Sport is no ordinary car. It is the manic but agreeable twin of what is already a quick, desirable and expensive piece of machinery. So, why build it? Because you can! Enter Jaguar Land Rover’s SVO or Special Vehicle Operations unit. 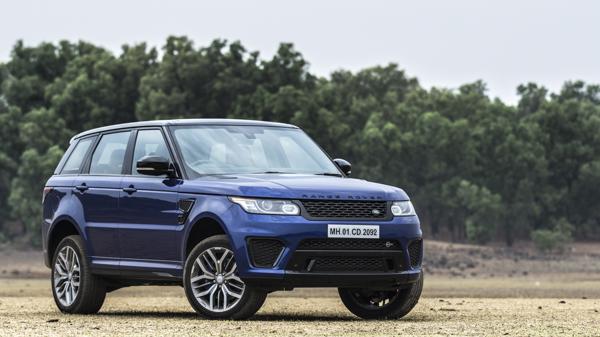 Might sound like something the MI6 might conjure up, but the SVO’s sole purpose is to build ridiculous vehicles, because there are a wealthy set of buyers who want one. Actually, SVO wants to do more than just attract the wealthy; it wants to build itself into a brand that will sit above the current JLR line up, like Mercedes’ AMG, if you please. SVO will have two types of these outrageously likeable cars – SVR and SVX where R stands for kickass road performance and X stands for go-further than ever before. Not verbatim of course, but that’s the essence.

And this, the Range Rover Sport SVR, is the first ever R to have rolled out. And we love it! 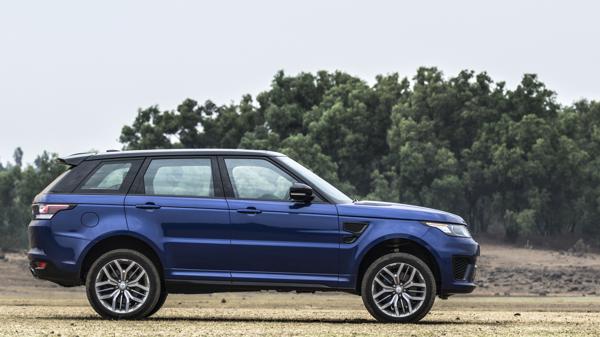 As we mentioned, JLR’s SVO division has done really well here to present the Sport SVR as a sleeper. It has this gorgeous paint hue, of course, but other than that, it’s less bling and more gangsta. The Sport SVR gets blacked out Range Rover badging that goes well with the dark roof, dark ORVMs and dark fender grilles, all finished in gloss black. JLR calls it the Black Design Pack.  The SVR badging is subtly placed as well. At the front it is located on the lower grille while at the rear it’s a little more visible courtesy its location on the boot lid. 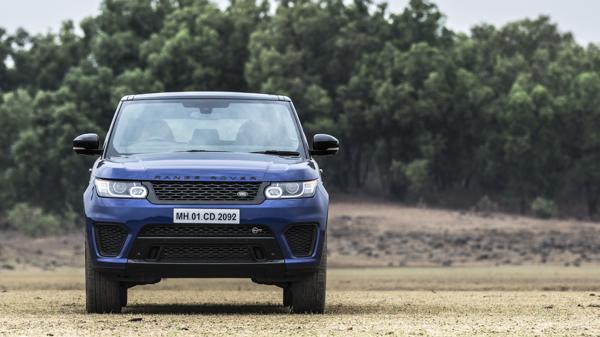 These elements apart, the Sport SVR also gets bigger wheels shod with fatter tyres, and a different set of front and rear bumpers. The latter are more aggressive and in your face. Plus, the exhaust tips on the SVR (there are four!) blend in instead of shouting out thanks to the lack of chrome. Okay, these do shout out, but in a whole different way, which we will get to in a bit. SVR is all about performance, so it’s not surprising to see that JLR’s SVO division hasn’t bothered with redoing the Sport SVR’s interiors. These are near identical to its more ‘ordinary’ twin, the Range Rover Sport. The dash, the steering, the centre console and the door trims and design are the same as the latter. The only thing that’s changed is the finish. So, while the Sport’s insides are all about beige, luxury and subtle contrast, the SVR’s cabin uses more variety of finishes including carbon fibre and brushed metal. Plus, there’s a higher sense of occasion to its insides courtesy a more dramatic contrast. The biggest change on the inside, however, is the seats. The Sport SVR gets firmer, better-contoured and more supportive sports seats, both front and back. And you begin appreciating this change given the SVR corners in a more brutal fashion. And, it carries higher corner speeds as well. The good news is, though, the sport seats are firm, these never proved to be uncomfortable. In terms of equipment, the SVR is as well specced and matches the Sport in Autobiography trim quite closely. Okay, so it misses out on fog lamps, a full-sized spare, and a rear entertainment package, but all this is trivial really. What’s important is that even though you get this purposeful looking, performance oriented and pricey SUV in the form of the SVR, you don’t miss out on crucial luxury; which is great for it just seems more worthwhile. 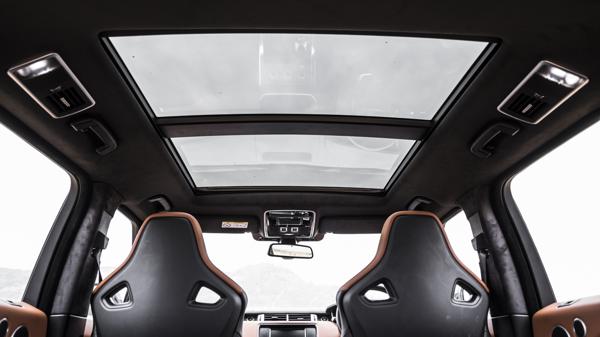 This is what it all boils down to. A 5-litre supercharged V8 monster of an engine mated to an 8-speed automatic. It is the same engine from the F-Type R, so it makes a colossal 543bhp of max power, and a hardly believable (for a petrol, mind) 680Nm of peak torque. So, when you let go off the brake with the throttle flat on the floor, the Sport SVR first squats on its hind, picks a hint of wheelspin, digs into the road and with a snarl so loud and lovely, it literally catapults you to the end of the road. No matter how far that end might be. 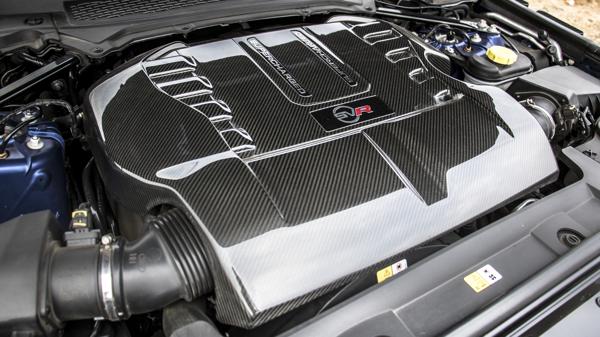 As per our testing, it goes from zero to 100kmph in just 5.35 seconds. And, 200kmph whooshes past you in less than 20 seeconds, as the SVR charges towards it 260kmph top speed without showing any signs of losing its chest thumping aggression. It’s like the Hulk, only is a more presentable blue hue. Its overtaking ability – reflected in its 40-100kmph kickdown time – is equally shattering; it takes less than four seconds to complete the run. And all the while, the V8 snarl only gets louder and more intoxicating. If we had no mechanical sympathy, we would still be at it; doing acceleration runs from a standstill that is. Just to clarify, the F-Type R is faster, no doubt. But, when you are flung towards the horizon with rage whilst sitting on the first floor instead of the road itself, the sensation is – for the lack of a better word – extremely heightened. The Sport SVR’s straight-line performance is only part of what makes this Range Rover shockingly good. You can be doing over 200kmph and it feels so stable and controllable; it is as if it were doing no more than a quarter over a ton. It changes lanes, slows down and even manages the undulations with the least possible drama. And when the twisties appear, the Sport SVR completely destroys one’s prejudices about large, tall and heavy SUVs. The SVR weighs in at over 2.3 tonnes and stands at a little under 1.8 metres high. But, around long sweeping corners – in Dynamic mode – it feels a lot lighter and smaller. It turns in well and one can get hard on the gas even before getting to the apex. Its smart torque vectoring system pulls the SUV in towards the apex and as soon as the corner starts opening up, it shoots you off with violence. It’s a slightly different story around tighter bends, however. No matter how great the engineering, sometimes physics is impossible to defy. Charge hard into a tight corner and all you will get is body roll and understeer at turn-in. But, be sensible and take the slow-in-fast-out approach, and the Sport SVR will surprise you with its willingness to be playful. With its all-wheel drive system being game to sending up to 100 per cent of the torque to its rear wheels, the SVR can prove to be quite entertaining as well. For an SUV that takes pride in a quick Nurburgring time, the ride quality isn’t half bad. Sure, it is stiff and at slower speeds there’s some jiggle and bounce, but it won’t leave you with a thumping headache. And, of course, there’s always the option to go fast at a touch of the throttle, which does sort the ride to an extent. Mostly though because it is a Land Rover at the end of the day, the SVR can off-road too! We only indulged is some mild trail driving but like most others with the green oval, this one too gets the Terrain Response 2 system. Which means come rain, hail or snow; or sand, mud or rocks; the SUV will sail through. Given of course you don’t mind damaging those wheels and that beautiful paint. Like we said at the start, we do love the Sport SVR for it is quite a sensible car contrary to what the world will have you believe. And here’s why. It’s a Range Rover. So, it is big, burly and British. It’s also luxurious, quiet (when needed), and comfortable (okay, not entirely, but it isn’t painful either).  And it is fast. Very fast. It turns, it brakes, and when you run out of road, it off-roads too. It is so multi-faceted that if you aren’t worried about the huge petrol bills it might run up, it’s the perfect buy. No. 4x4 drive option is not available in any of the 11 versions of the Land Rover Range Rover Sport. The new Range Rover Sport has been launched in India for a starting price of Rs 99.48 lakhs (All-India, ex-showroom). Like its elder sibling, this too is a mid-life update for this generation of the India-bound MY2021 Range Rover Sport unveiled: Everything you need to know

Land Rover is busy working on a minor facelift for the second-gen Range Rover Sport, as seen in these spy shots taken at the infamous Nurburgring circuit in Germany. This sporty derivative of the