The new MINI Cooper, a Hatchback from MINI, was launched in India in May, 2018. Cooper has received 97% rating score from our users. Cooper is preferred for its Performance and Styling. The old Mini Convertible sold in India was ultimately an automotive paradox: while it would have no trouble turning heads with its preppy, boastful design and interiors, it felt grossly underwhelming to drive. The main culprit being the slow and dim-witted powertrain that seriously hampered the otherwise brilliant road manners of the Mini Convertible.

Imagine our delight (and the smiles that followed it) when Mini showed us all the latest-gen Convertibles in the fancy Cooper S guise. Gone is the rudimentary 1.6-litre naturally aspirated engine and in its place is a bigger 2-litre turbocharged unit making whooshy noises and a lot more power. This new Mini Convertible, then, has already bettered its predecessor on paper; however, is it as good or any better when it comes to offering top-down thrills for the price of a mid-size luxury sedan?

Even from a distance, there is no mistaking a Mini Cooper. The low-riding stance and the unique silhouette give it enormous character and a good deal of credibility. With the roof off, one might expect this car to look a bit ungainly but anyhow, it doesn’t. Thanks to the wheels that are pushed right to the corners, there’s little overhang at either end and that adds to the hunkered-down look. What’s more, the absence of a roof makes the Convertible even lower that it actually is and as a result, this thing looks great as it drives past you.

The roof itself is made out of a hard-wearing textile and takes about 18 seconds to open and close. Better still, it can be operated at speeds of up to 30kmph. So if you fancy some attention, you can put the roof down or up even on the go. Like before, the Convertible allows you to slide the opening of the fabric roof backwards to an extent that it can be used as a sunroof thought it tends to create a fair bit of wind noise. We would rather have the roof either fully on or off.
Coming back to the overall stance, the wider track (compared to the predecessor) and flared wheel arches give the Mini Convertible a great visual stance especially when viewed from behind. Our test car was finished in British racing green – a fitting colour for this thing if you ask us. While Mini is offering a variety of loud and ostentatious colour options for the Convertible, there is something about this particular shade of green that harks back to the good old Austin Minis.

The interior somehow retains that retro 70s charm and yet, comes with the usual array of unconventional Mini fare i.e. the massive infotainment screen fitted slap-bang in the middle of the dash, along with a pile of dysfunctional toggle switches underneath. Nevertheless, it’s a comfortable place to be in for the passengers up front. Head room, even with the roof on, is generous and the leather seats are wide yet bolstered. As for those in the back, they might face a space because even with the front seats set unfairly forward than usual, there is hardly any legroom for those in the back. Not that this is a matter of utmost importance but we would like to add that this new model has 215-litres of boot space which is roughly 25 per cent more than before.
As one would expect, there’s an assortment of soft-touch materials, leather upholstery and high-gloss plastics to go with the premium that Mini asks for this car. However, we are not sure if the Mini Convertible is particularly good value. Yes, you do get a multi-function leather steering wheel, body hugging leather seats and commendable quality all-round, but the overall feature list isn’t all that generous. Well you can have a head-up display, a nice sounding Harman Kardon audio system and LED headlights with cornering functions as pricey optional extras for your Mini but shelling out more just for Bluetooth connectivity is a bit unreasonable.
Funky design touches and glaring omissions aside, if you really need convincing, you need to get behind the wheel and experience this thing on the road.

Unlike the previous generation of the Convertible S which had a high revving 1.6-litre turbocharged engine, this new model has a bigger 2-litre motor that is also turbocharged. Now although the latter may not have that screaming sound of the smaller motor but it does bring its own nice soundtrack. It’s a throaty note that only gets better as the revs climb and like in the old model, the exhaust pops and burbles on the overrun.

With 189bhp of power and 280Nm of torque, the new Mini Convertible trumps its predecessor by a long way not just on paper but out on the road as well. This drop-top doesn’t feel lethargic anymore, even on part throttle. If anything, you can even palm the tall gear knob or tug the paddle shifter and short shift to a higher gear and make the most of the mid-range punch, thanks to the torquey engine. That said, there is some amount of lag up until 2,500rpm, post which the turbo spools up and pins you back to the seat for a fraction of a second.
Though not as big an improvement as the engine, the 6-speed automatic gearbox is better than before. It gauges the driver’s throttle inputs in a better manner now and the upshifts are far crisper as well. However, the same cannot be said for the downshifts which aren’t as smooth as we would be like them to be.
Now on to the highlight of basically every Mini that is the way it handles: the direct steering and nimble size make the Convertible fun to throw around. Despite the added width and increased wheelbase, there is still that go kart-like feel behind the wheel which offers good feedback when the front wheels start to lose grip. Now some might find the steering a bit too heavy in the town but it really is a point and shoot affair. As we found out through a quick slalom workout on a closed road, body control is superb too, with the Mini resisting lean through the corners and savouring quick direction changes. Be it zipping around town or tearing up the twisties, the quick steering, strong brakes and the brilliant exhaust note all add up to leave you with a wide grin.
However, what’s less likely to make you smile is the ride quality. Admittedly, it’s not really fair to expect the Mini Convertible to soak in bumps or potholes like a luxury sedan – it’s a low-slung, stiffly sprung car, after all. Nonetheless, this new model rides a lot better than its predecessor. Yes, the ride is still crashy at low speeds but it’s never to the point that it’s definitely uncomfortable.

Not everyone would agree to this but it’s fair to say that the Mini Convertible has enough retro design bits to keep the spirit of the original Mini alive. And now with the added punch from the bigger turbocharged motor, there is no doubt that this drop-top model finally has the go to match the show.

At Rs 34.90 lakh, the new Mini Convertible seems good value especially given that it’s being offered in the full-fat S guise. However, spec it up with a handful of optional extras and you would end up paying nearly Rs 50 lakh. That’s half a crore for something that’s not as much a car as it is a classy ornament to make you feel good about yourself. Well played, Mini.

Is Cooper a Good Car?

Based on 98 User Ratings

Cooper has received a very favourable 97% approval rating based on 98 user reviews.

Users prefer to buy Cooper for Performance (96% rating) and Styling (96% rating). The least appreciated parameters are Mileage (88%) and Value for Money (90%).

How Cooper fares against competition?

Find a list of all 2 petrol versions of MINI Cooper. This table includes on-road price which covers all costs like RTO and Insurance.

The Mini Cooper family is officially launched in India. It is available in 3-door petrol and diesel variant and a 5-door diesel trim. The new Mini Cooper is a niche vehicle in the country, but at its price point, it goes up against Mercedes-Benz GLA, BMW X1, and Audi Q3. The Cooper takes the CBU route in India and packs a lot of cosmetic update along with an extensive feature list. It also carries the new minimized Mini logo which was first seen on the Countryman.

Styling wise, the Mini Cooper gets a redesigned adaptive headlamps units with LED lighting signature and surround indicators. The Copper also gets the Union Jack-inspired LED pattern on the tail lamps. The front bumpers get aggressive air-intakes flanked by circular fog lamp units. At the rear, the redesigned bumpers integrate the dual exhaust tips sticking out from the middle. The 2018 Mini adds three new body paint options – Emerald grey, Starlit blue and Solaris Orange – to the already available set of colour options

On the inside, the cabin is refreshed thoroughly. So now there is a piano-black finish insert on the dashboard and centre console. The ambient lighting is also part of the package. The iconic centre stacked circular infotainment system gets a 6.5-inch display which can also be upgraded to an 8.8-inch touchscreen unit. The sunroof is also available as an optional fitment now. The Mini Excitement Pack can add 12 colour options for ambient lighting. It also includes the new MINI logo projection from the exterior mirror on the driver's side when opening and closing the door.

MINI Cooper, a Hatchback, is available from ₹ 40.00 - 40.58 Lakh in India. MINI offers the latest Cooper in 2 versions in India. The base model S starts at ₹ 40.00 Lakh in Delhi and the top model S (Steptronic Sport) priced at ₹ 40.58 Lakh in Delhi. If you are looking for 4 seater car then you should consider Cooper. 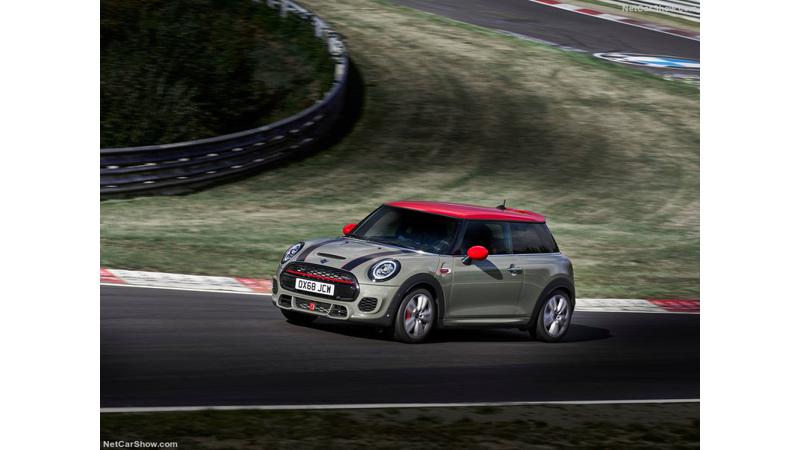 2020 Mini Cooper JCW to be launched in India tomorrow

The 2020 Mini John Cooper Works hatchback will be launched in the Indian market tomorrow. It&rsquo;s the latest version of the hottest Mini you can buy today and will be offered here as one 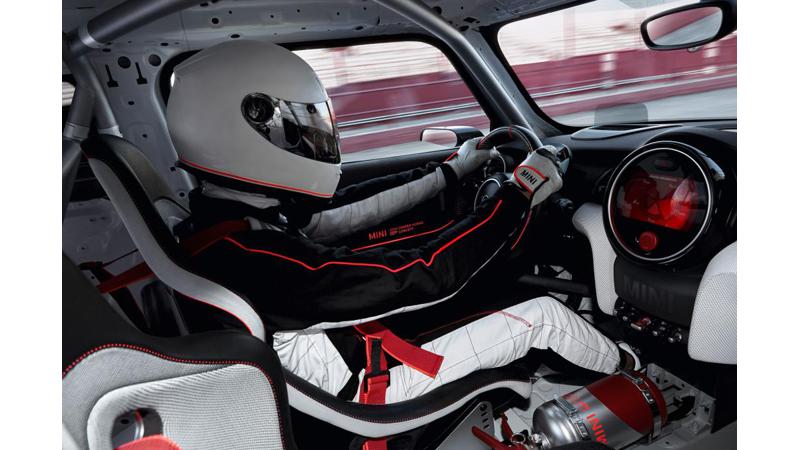