About MG Hector Plus

MG Motor India has expanded the Hector range with the six-seat and seven-seat Hector Plus, with prices ranging from Rs 13.34 lakh to Rs 19.12 lakh (all prices, ex-showroom, pan India).

Find a list of all 6 petrol and 8 diesel versions of MG Hector Plus. This table includes on-road price which covers all costs like RTO and Insurance. When MG rolled into India, its first product, the five-seat Hector, was hailed as ‘India's first internet SUV’ and ‘It's a human thing’. Now, in the hope of spreading its legs, the company offers &am 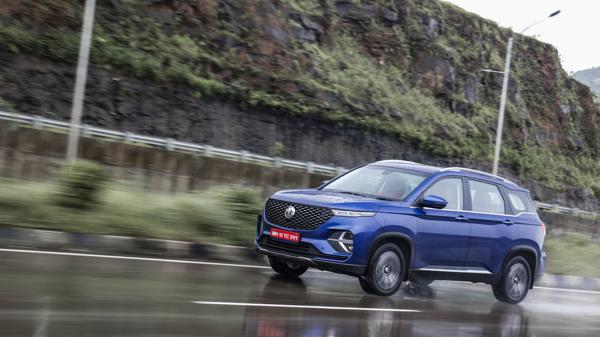 When MG rolled into India, its first product, the five-seat Hector, was hailed as ‘India's first internet SUV’ and ‘It's a human thing’. Now, in the hope of spreading its legs, the company offers ‘it’s a human thing’ in a more apt six- and seven-seat layout so that we Indians can do what we love most; carry everyone and everything everywhere. Before I digress into some sort of bibliographic piece in human nature, let me get going on the MG Hector Plus and share what’s there to know. 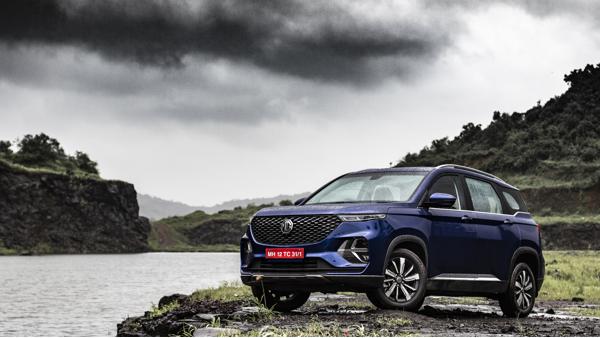 As for exterior design, what immediately stands out are the new studs on the grille that’s flanked on either end by the new LED DRLs and fog lamp arrangement. And yes, the same goes for the new rear LED tail lamps with the revised bash plate that houses the symmetrically-positioned exhaust outlets, only one of which is the real deal. What you won’t spot unless you read the brochure or are into tailoring, is the extra 65mm length over the five-seat Hector. Frankly, arriving in the Hector Plus is more like real estate in motion. 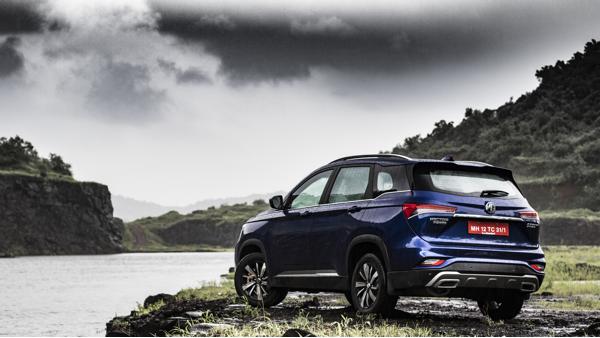 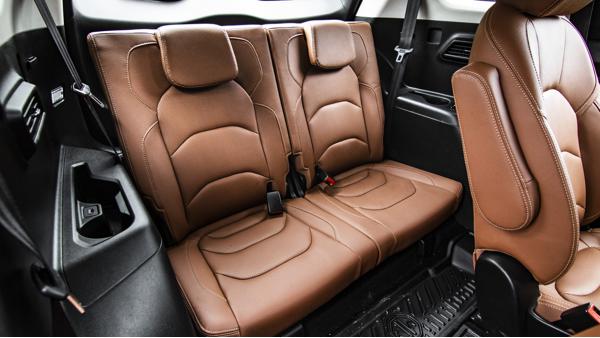 Since this one’s all about the third row, let’s dive straight into it. Sadly enough, these twin seats are best suited for children, and the only way an adult can sit here (other than emergencies) is if the midget seated in the middle row adjusts their seat accordingly. Now, on to the middle row of this six-seater with its plush set of captain seats (bench in seven-seater). What makes my job easy is that they are similar to the front seats. So they have great cushioning, with all the right sort of support that can make even long journeys comfy. 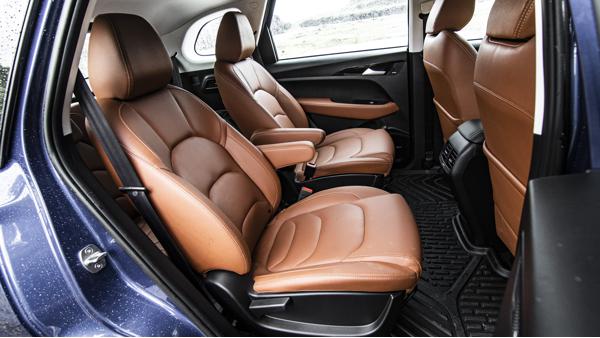 This experience is further amplified by the extra wheelbase that not only swells the legroom, but along with the dual sunroof, makes the cabin so much airier. As regards the boot, with the third row up, there’s only enough space for some oddly stacked soft bags. But when folded, the resultant 530-litres can easily swallow most luggage requirements, like a weekend trip to the mountains or an airport drop. Well, that’s just about it for the ‘it’s a human thing’, and now on to the ‘India's first internet SUV’ bits, because amusingly, the rest of the car is better off listed in the features section! 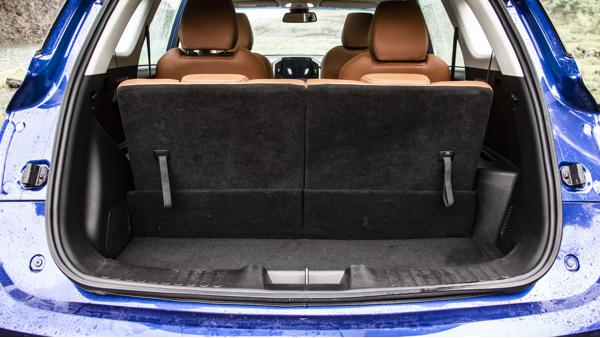 After glancing at that mammoth vertical touchscreen, you really can’t be blamed for searching around for a PS4 controller! Jokes apart, it comes with all the connectivity options, car control features as well as a 4G-enabled sim-card with features like find-my-car, live traffic updates, navigation information, voice-assistant functions, weather updates, and even a ‘Ganaa’ account to stream your favourite tracks. 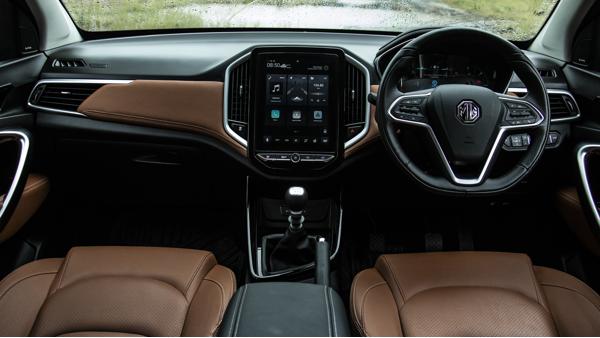 Even the climate control system is integrated into the infotainment display. The tricky thing though is that it takes some time to respond. So, if you’re driving alone, it can keep your eyes off the road, which can be disastrous howsoever dashing the feature is. Other eye-catching features include a 360-degree camera, heated mirrors, and a hands-free boot opening. Alternatively, optional extras include rear screens and all sorts of lame neck and lower back supports. 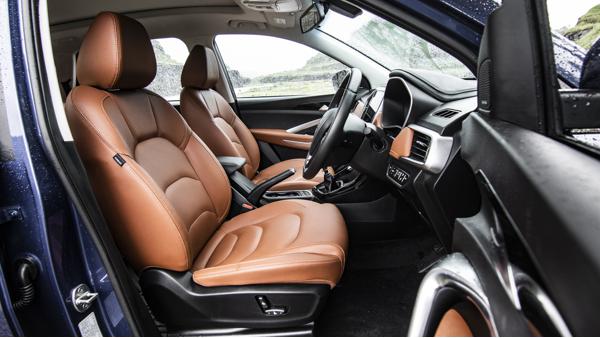 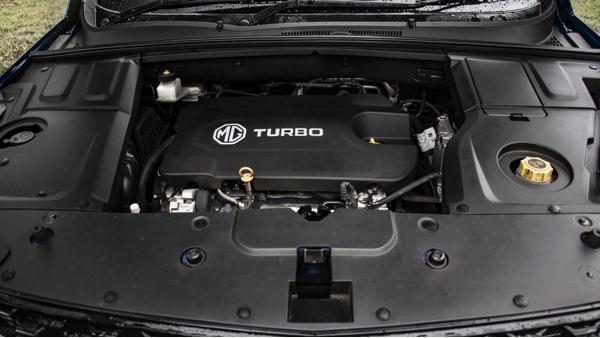 Sending power to the front wheels of the MG Hector Plus here is a 168bhp/350Nm 2.0-litre diesel mill with only one transmission option; a six-speed manual gearbox. As with most diesels in the business, this one too has a ubiquitous gravelly tone. But the good thing is that this cabin’s pristine sound insulation, with its fancy internet gizmos running, prevents the engine’s noise from spilling into the cabin unless you’re feverishly revving it. 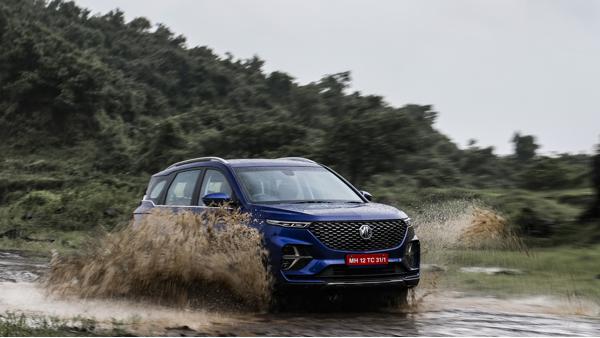 Even then, some vibrations find their way to the steering and gear lever, which aren’t a bother. But what is, are the gearshifts. To start with, they aren’t smooth, then there are the unnecessarily long throws which are followed by the gates that aren’t clearly defined. And, if that weren’t enough, the clutch is slightly heavy too. All of these make urban crawling in the Hector Plus more of a chore. So like you’d guessed, we were caught lugging the gears to avoid dealing with the transmission’s vices. 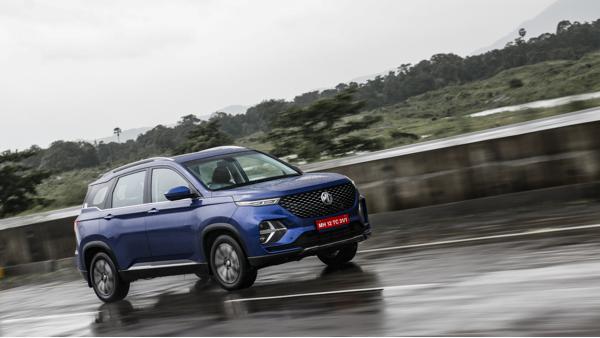 Yet, the flexible engine somewhat delays it. In other words, constant gearshifts at slower speeds aren’t needed as there is adequate low-end grunt thanks to the surge of power from just under 1,500rpm onwards. Thereafter, the strong mid-range allows it to pull cleanly to the red line. If it’s any consolation, how does getting up to 100kmph and staying there all day long with the rev-needle hovering the 2,000rpm mark sound? Yes, I thought so too. 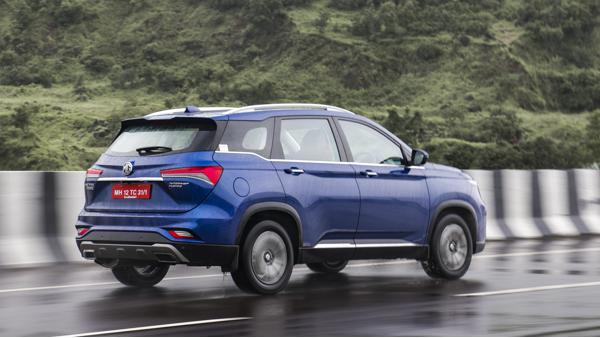 With comfort being a priority, the Hector Plus’ plush slow and high-speed ride quality is a true reflection of this. So, while the well-judged dampers absorb most bumps and imperfections effortlessly without any suspension noise, it’s only the harsher ones that are felt within the cabin. These traits along with the strong chassis also help when driving on highways, as the solid straight-line stability makes it a true mile-muncher. 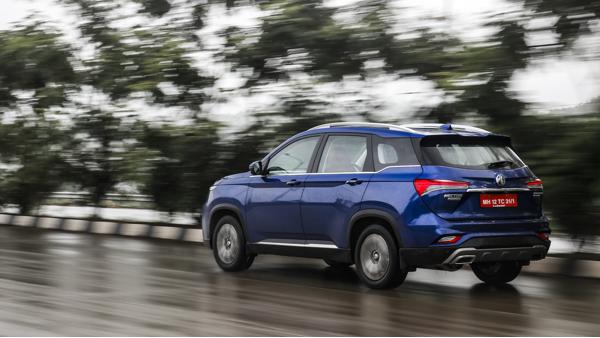 On the flip side though, the soft suspension doesn’t make the hefty Hector Plus nimble in any way, especially with its slow steering. So when the curvy roads arrive, it’s in the best interests of this heavy-weight contender, to take it easy or live with the pronounced body roll that can have your organs moving about uncannily. 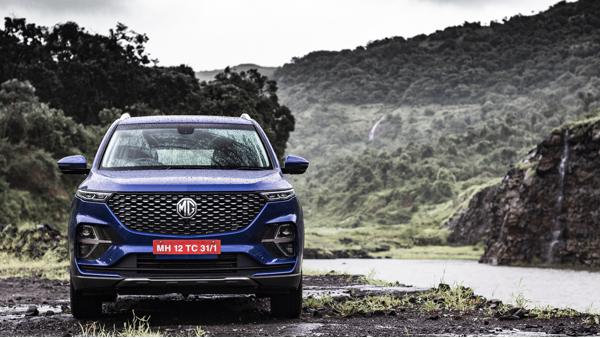 The biggest drawback of the MG Hector Plus is that it isn’t dynamically sorted. And the absence of an automatic diesel, in the current state of affairs, could be a bummer for some. That aside, the Hector Plus builds on the Hector respectably with the addition of a third row, more space, and added features. Overall, at Rs 23.88 lakh (OTR-Mumbai) for this top-end Sharp variant, the Hector Plus benefits from an unending list of impressive features, strong street presence, a decent motor, and more practicality than ever before; all of which make this package a worthwhile one. 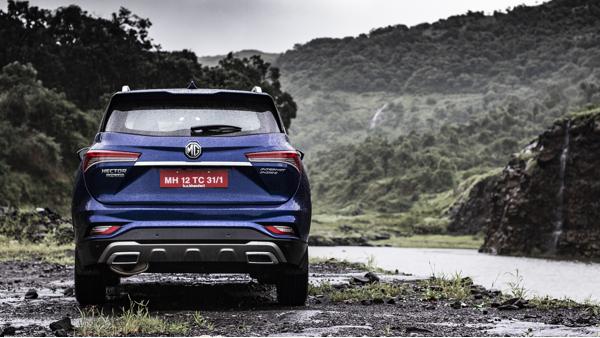 The on-road price of the MG Hector Plus in Delhi starts at ₹ 14.45 Lakh for the petrol engine. Meanwhile, the top end model (Hector Plus Sharp 1.5 Petrol Turbo DCT 6-STR Dual Tone) with petrol engine is priced at ₹ 20.20 Lakh.

The on-road price of the MG Hector Plus in Delhi starts at ₹ 15.94 Lakh for the diesel engine. Meanwhile, the top end model (Hector Plus Sharp 2.0 Diesel Turbo MT 6-STR Dual Tone) with diesel engine is priced at ₹ 20.70 Lakh.

MG Hector Plus comes in and 67, seater options.

Ground clearance of MG Hector Plus is 192 mm.

Yes. Sunroof is available in 8 Hector Plus versions.

No. 4x4 drive option is not available in any of the 17 versions of the MG Hector Plus.

Quick Facts about MG Hector Plus

Similar Cars To MG Hector Plus

Note: Specifications for Hector Plus Style 1.5 Petrol Turbo MT 7-STR have been mentioned 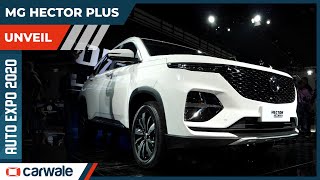 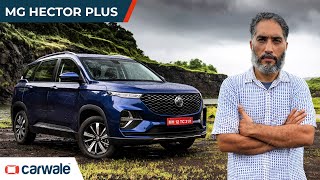 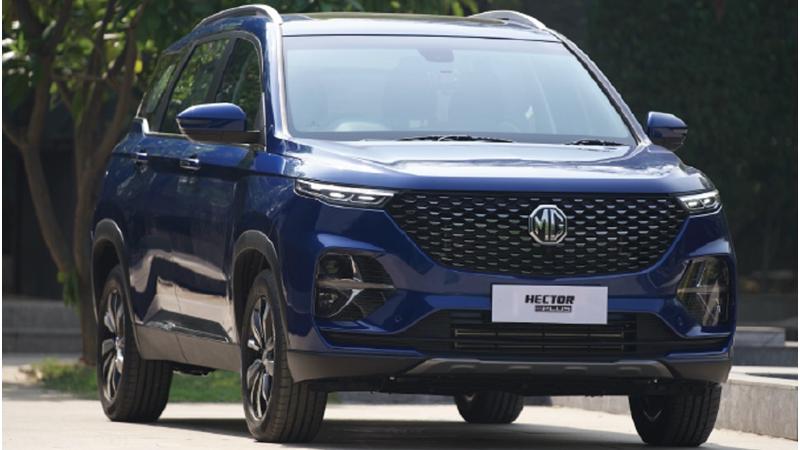 MG Hector Plus MG Motor India and Devnandan Gases recently joined hands to increase the production of medical oxygen; and within a span of one week, they have achieved an increase of 15.2 per 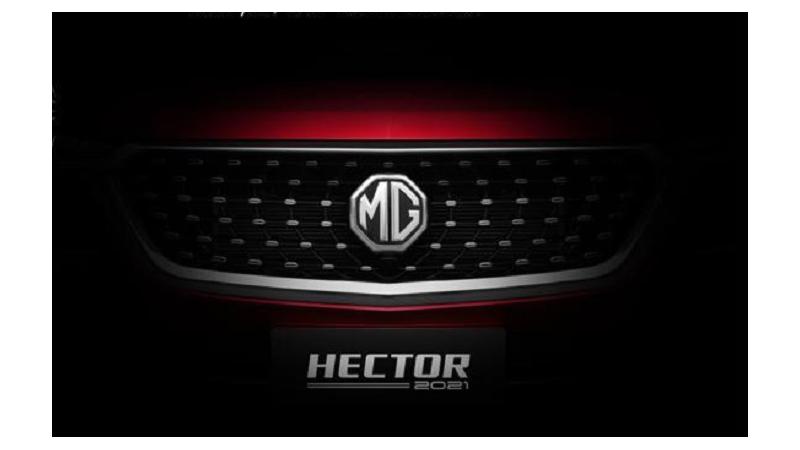 2021 MG Hector &nbsp;MG has finally announced the launch date of the 2021 Hector Plus facelift. The updated SUV with a seven-seat layout will break covers on 7 January 2021. The car has started

MG Hector Plus MG Motor India has launched the Hector Plus in the country, with prices starting at Rs 13.49 lakh (ex-showroom, all India). Bookings for the model began last week for an amount of

The MG Hector Plus seven-seat model has been launched in India with prices starting at Rs 13.34 lakh (All-India ex-showroom). As the name suggests, it&rsquo;s a Hector Plus with three-rows and is the

&nbsp; MG Hector Plus&nbsp; Post much wait, MG Motors has launched the six-seat Hector Plus in India at a starting price of Rs 13,48,800. The vehicle is available in three engine options