The new Toyota Hilux, a Truck from Toyota, was launched in India in Mar, 2022. Hilux has received 48% rating score from our users. Hilux is preferred for its Performance and Styling. 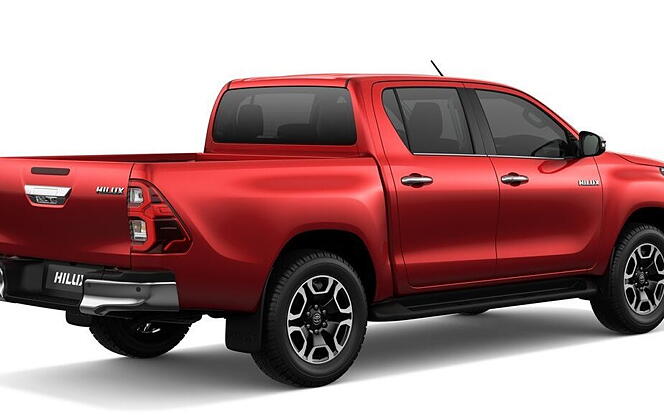 Summary
Toyota launched one of its most anticipated vehicles, the Hilux in India on 31 March, 2022. The popular pickup is available in a choice of five paint options across three variants, namely 4x4 MT Standard, 4x4 MT High, and 4x4 AT High.

Engine and transmission
Under the bonnet, the India-spec Hilux gets a 2,755cc, four-cylinder, turbocharged diesel engine coupled to either a six-speed manual or six-speed automatic gearbox. That said, it produces 201bhp and 420Nm with a manual gearbox and 500Nm with automatic transmission.

Is Hilux a Good Car?

Hilux approval rating is at 48% based on 32 user reviews.

Based on 32 User Ratings

Users prefer to buy Hilux for Performance (77% rating) and Styling (72% rating). The least appreciated parameters are Value for Money (52%) and Mileage (54%).

How Hilux fares against competition?

Among Toyota Hilux alternatives, Skoda Superb is the best in terms of Styling, Comfort, Performance, Mileage and Value for Money.

Find a list of all 3 diesel versions of Toyota Hilux. This table includes on-road price which covers all costs like RTO and Insurance.

The on-road price of the Toyota Hilux in Delhi starts at ₹ 33.99 Lakh for the diesel engine. Meanwhile, the top end model (Hilux High 4X4 AT) with diesel engine is priced at ₹ 36.80 Lakh.
Toyota Hilux comes with a 2755 cc Diesel engine and the price starts at ₹ 33.99 Lakh in Delhi. Whereas Isuzu D-Max comes with a 1898 cc Diesel engine and starts with a price tag of ₹ 19.48 Lakh in Delhi. You can compare Toyota Hilux and Isuzu D-Max and chose the right car for you.
Toyota offers warranty for first 100000 km with all offered 3 versions. However, warranty expires after 3 years even if km is not achieved.
Toyota Hilux top version is High 4X4 AT. It is priced at 36.80 Lakh in Delhi.
Toyota Hilux is available in 5 colours - Grey Metallic, White Pearl Crystal Shine, Silver Metallic, Emotional Red, Super White
There are 8 Toyota Hilux showrooms in Mumbai. Check showrooms in your .
View More FAQ The India-spec Hilux is available in three variants. The Hilux is available in three trims.