The new Isuzu D-Max, a Truck from Isuzu, was launched in India in May, 2021. D-Max has received 92% rating score from our users. D-Max is preferred for its Styling and Comfort. Pickup trucks were never really popular with private owners. Commercial owners though found relatively great use of this vehicle. In the tiny roads and narrow lanes, the sub-1.5 ton vehicles and the sub-1 ton models are the most popular. Most of the market is ruled by Tata and Mahindra, whose pickup models are quite useful in the commercial sector. In spite of the fact that this vehicle space has quite some dearth with respect to the number of models, entry-level vehicles are ruling the roost in the sector. With Isuzu launching the D-Max pick-up truck, it is expected that the space will no longer have the usual gap.

Isuzu D-Max has the goal of becoming one of the most affordable as well as comfortable lightweight pick-up machine, mainly suitable for small businesses. The taxation structure and the various set of rules governing the commercial models. However, the new government is looking forward to boost the small industries. Simultaneously, the government is also promoting smaller pick-up trucks and their sales. This is primarily because of the fact that these vehicles are more suitable for the Indian roads as compared to the full-sized trucks. The congested Indian roads have a tough time accommodating the huge trucks and thus, are better suitable for pick-up trucks. Isuzu has thus struck the right chord by launching the D-Max.

Further to this, read Isuzu DMAX Road Test details by our expert.

Isuzu has a fierce looking exterior, which has been primarily made to beat the roads with its performance. The external chrome grille has an appearance like a lion’s teeth. The wing mirrors, body-coloured bumpers as well as the door handles has been neatly carved to suit the ergonomics of the vehicle. The cargo area has been efficiently carved to merge well with the body of the pick-up truck. The suave appearance is expected to gain the Isuzu a number of brownie points. Hub caps with steel wheels have been provided as a standard on the vehicle. However, Isuzu might bring an option of alloy wheels.

The vehicle has been provided with only two passengers’ compartment and the arched deck version has been provided only as a space cab. The space available on the rear is quite more than expected. Also, there is a thin line of cushioning on the back wall. This is the result of the company’s estimation that undoubtedly, people will sit there anyway.

The cabin of the pick-up truck is almost basic and the interiors have been made as frill-free as possible. Its dashboard has been out in place right from the SUV of the brand MU-7. The grey and black plastic work has been utilised delicately in place of the regular silver trim and faux wood. Instead of the normal touchscreen a single-DIN Kenwood audio system has been put in place.

The quality of the cabin has a distinct touch Isuzu-touch with a fit and finish, well above par the conventional models. The plastic used has been tried and tested and is compatible with rough conditions. However, rest assured that it does not mean that the cabin is rough; in fact, the entire system has been designed to amp the comfort quotient as well.

The bottle-holders on the inside of the doors and the dual cup-holders in the central console is ideally sized to fulfil the purpose ideally. Also, proper-sized cup-holders are in place against the back console along the back wall, which are slightly problematic to reach.

D-Max has been provided with power windows, steering rake adjustment facility and a day-night rear-view mirror. Wing mirrors are adjustable only by hand with no seat adjustments. The driving position is quite commendable where Isuzu has fixed the perfect combination of not too high or not too low riding position. The pick-up offers almost perfect visibility to all people where the bonnet ends. Fabric seats have a firm grip and are ideally designed to suit a long drive.

Isuzu has been provided with a 2.5-litre, quad-cylinder, common rail diesel engine, which generates 134 bhp power and a torque output of 294 Nm of torque. It uses a powerful five-speed manual as well as automatic transmission system.

When it comes to power, the engine roars and jump starts to move. However, as I starts moving, the sound ebbs down and power flow is consistent. The drivability is moderately smooth in the middle-range. When the boost sets in, the pick-up truck accelerates almost evenly. The gear-shifts are small initially, but D-Max goes to a longer range at ease with higher gears.

Isuzu D-Max has not been provided with an ABS system; which hinders it normal braking procedure by a notch. Skinny tyres have been put in place that might raise an eyebrow at the moment. However, Isuzu might follow these as standard in the recurrent versions.

Except the skinny tyres, the pick-up truck seems to be ideal for small businesses. Especially suitable for the narrow Indian roads, Isuzu might be a good option in Tier-II and Tier-III cities, as well.

The main competitors of Isuzu D-Max will be the Tata Xenon XT and Mahindra Scorpio Getaway.

Is D-Max a Good Car?

D-Max has received a very favourable 92% approval rating based on 35 user reviews.

Based on 35 User Ratings

Users prefer to buy D-Max for Styling (89% rating) and Comfort (86% rating). The least appreciated parameters are Mileage (74%) and Performance (74%).

How D-Max fares against competition?

Find a list of all 4 diesel versions of Isuzu D-Max. This table includes on-road price which covers all costs like RTO and Insurance.

The on-road price of the Isuzu D-Max in Delhi starts at ₹ 19.48 Lakh for the diesel engine. Meanwhile, the top end model (D-Max V-Cross Z Prestige 4x4 AT) with diesel engine is priced at ₹ 26.95 Lakh.
Isuzu D-Max comes with a 1898 cc Diesel engine and the price starts at ₹ 19.48 Lakh in Delhi. Whereas Toyota Hilux comes with a 2755 cc Diesel engine and starts with a price tag of ₹ 33.99 Lakh in Delhi. You can compare Isuzu D-Max and Toyota Hilux and chose the right car for you.
Isuzu offers warranty for first 100000 km with all offered 4 versions. However, warranty expires after 3 years even if km is not achieved.
Isuzu D-Max top version is V-Cross Z Prestige 4x4 AT. It is priced at 26.95 Lakh in Delhi.
Isuzu D-Max is available in 8 colours - Nautilus Blue, Red Spinal Mica, Silky White Pearl, Sapphire Blue Mica, Galena Grey, Silver Metallic, Black Mica, White Solid
There are 0 Isuzu D-Max showrooms in Mumbai. Check showrooms in your .
View More FAQ 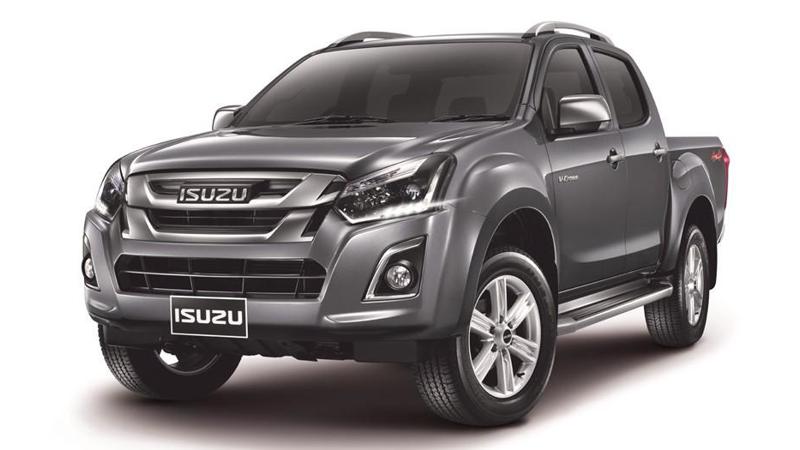 Following the roll out of the new D-Max V-Cross at the newly built manufacturing facility in SriCity, Andhra Pradesh, Isuzuhas announced some major production expansion

2017 Isuzu D-Max introduced in the UK

Isuzu has upgraded the D-Max for 2017 and is now gearing up to put this new model on the roads in the UK. 2017 Isuzu D-Max introduced in the UK The highlight upgrade on the 2017 D-Max is a new