The Nissan Magnite is an entry-level crossover, and it was launched in December 2020. The crossover has a 205mm ground clearance. It is available in four variants - XE, XL, XV and XV Premium. Nissan offers various features in the car such as an anti-roll bar, traction control, hill start assist, vehicle dynamic control, etc.

The Nissan Magnite has black cladding across its side lower panels. It also features a set of roof rails that can hold up to 50kg of weight. The SUV comes with LED bi-projector headlights, LED DRLs and LED fog lights. The Magnite gets 16-inch wheels too. Additionally, two airbags and an anti-lock braking system with electronic brakeforce distribution come as standard. An optional Tech Package features ambient lighting, puddle lamps, LED scuff plates, an air purifier, a JBL sound system and a wireless charging pad.

Find a list of all 23 petrol versions of Nissan Magnite. This table includes on-road price which covers all costs like RTO and Insurance. Nissan Magnite is the newest entrant in the high-selling sub-four metre SUV segment. When launched on 2 December, the Magnite will compete against the likes of the Maruti Suzuki Vitara Brezza, Hyundai Venue, Tata Nexon, For 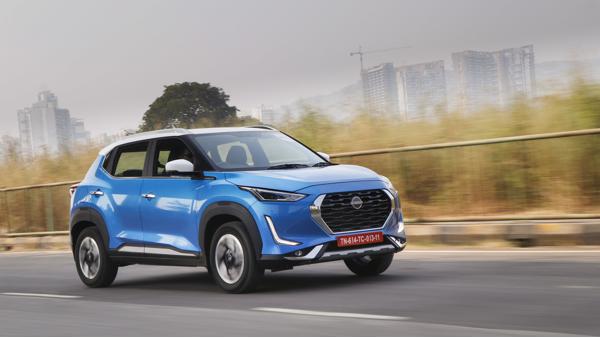 Nissan Magnite is the newest entrant in the high-selling sub-four metre SUV segment. When launched on 2 December, the Magnite will compete against the likes of the Maruti Suzuki Vitara Brezza, Hyundai Venue, Tata Nexon, Ford EcoSport, Mahindra XUV300, and the Kia Sonet. That’s a long list of competitors, so what makes the Magnite stand out amongst the crowd to be considered as your next buy? We find out.

We have driven the 1.0-litre turbo-petrol motor with a five-speed manual and a CVT automatic gearbox in this review. 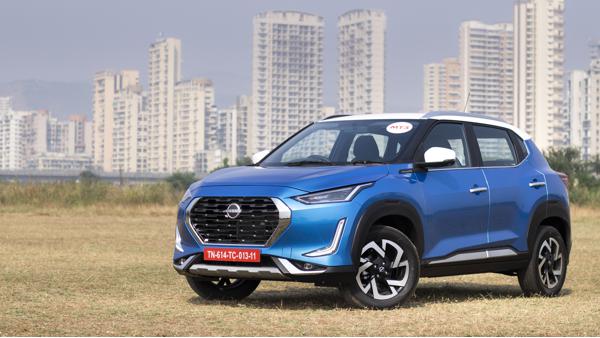 Measuring 3,994 x 1,758 x 1,572mm, the Magnite is not the widest nor is it the tallest in the segment, but has the same wheelbase of 2,500mm as its competitors. Underpinning the Nissan Magnite is the same CMF-A+ architecture that is also shared with the Renault Triber and the upcoming Kiger. Appearance-wise, the sleek headlamps paired with vertical L-shaped LED day-time-running lights are striking to look at. But we’d have loved Nissan’s V-motion grille leading the way instead of the chrome-surround mesh grille that is scrounged from the Datsun family. Below it, there’s a smartly designed faux skid plate and small circular fog lamps on either side. 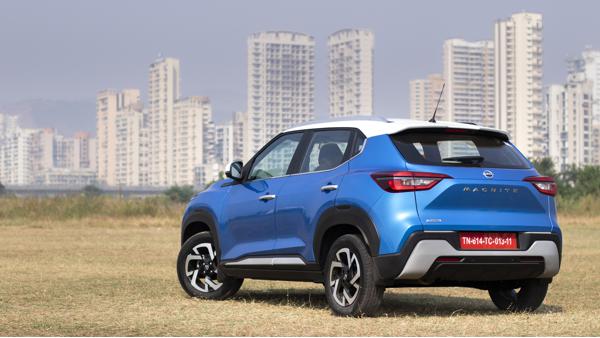 In profile, the floating C-pillar and well-defined wheel arches make the Magnite stand out. That said, the extra-large black cladding makes the 195/60 R16 wheel appear smaller in comparison. At the back, there’s some resemblance to the elder sibling, the Kicks, but the wraparound tail lamp looks upmarket. Another interesting element at the back is the split roof-mounted spoiler design that’s usually seen on a concept car. At the bottom, the silver insert and blacked-out bash plate also look the part. Overall, the Nissan Magnite is a good-looking SUV, if not the most handsome one. It won’t grab attention but wouldn’t go unnoticed either. 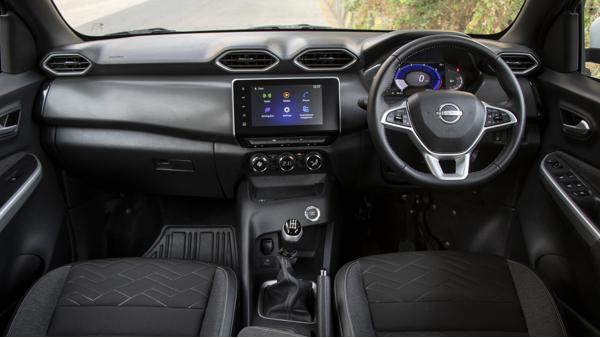 As we said earlier, the Magnite is not very tall, but getting in is pretty easy owing to its seat height. On the inside, there are many things to like. You are welcomed by a funky-looking all-digital instrument cluster which looks like it’s taken straight out of an arcade game. The dashboard has a honeycomb mesh pattern running across but some black-glossy element would have elevated the cabin feel to a great extent. We believe the quality of plastic used here is acceptable at best. It won’t set any benchmark, especially in its segment. Instead, it looks and feels much better in real than it does in the pictures. We liked the clutter-free, two-tier centre console with large, usable space and a wireless charging tray. There’s a nice tactile feel to the buttons and toggle switches. The eight-inch touchscreen slapped on the dash is easy to read and reach out. And the Urus-styled air-vents also look the part in the clean dashboard layout. There’s more than sufficient shoulder room upfront making the cabin feel airier. Combine it with a good amount of headroom and the Magnite feels like a bigger car on the inside than it appears from the outside. Good visibility with a commanding driving position is further helped by thin A-pillars and large ORVMs. As for the seats, they offer soft cushioning with good support at all the necessary points, especially on the side bolsters and under the thigh. Even the fabric seat covers with synthetic leather accents used here feel nice to touch. There’s a large space all around to shove in stuff including cup holders, both fore and aft, and a 10-litre glove box. 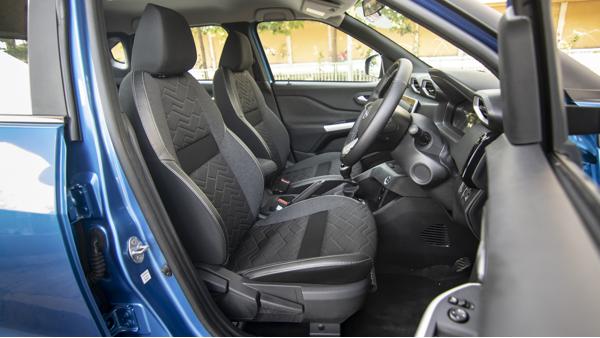 Move to the back and the bench continues to offer a good amount of space. For my height (I am 5.5’), the scooped roof offers ample headroom, and there’s more than ample knee room as well with surprisingly good under-thigh support. As for the shoulder room, three medium-sized individuals can easily sit abreast without feeling uncomfortable. Lastly, the boot space of 336 litres is on par with its rivals. Also, it’s good enough to fit in a full-size suitcase and two other medium-sized ones, and you can fold down the split-seats to increase the capacity to 690 litres. 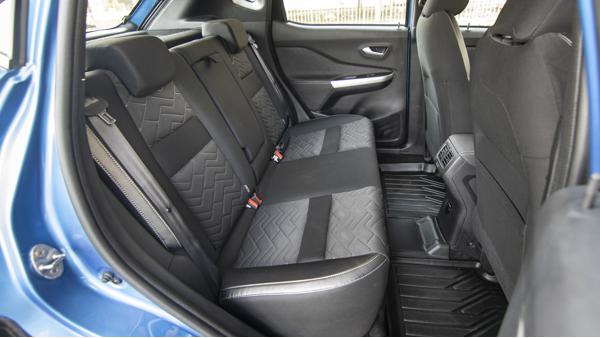 Nissan is offering the Magnite with many segment-first features. This includes the digital instrument cluster giving out information like two trip computers, average fuel efficiency, TPMS, and more. Then there’s the 360-degree camera which no other car in the segment has on offer. You also get wireless Apple CarPlay and Android Auto, and other connectivity features under Nissan Connect. If you opt for the tech pack, you get goodies like a wireless charger, air purifier, six-speaker JBL sound system, LED scuff plates, and puddle lamps. Other features include the automatic AC, cruise control, powered mirrors, LED DRLs and headlamps, rear AC vents, push-button start, voice command, gearshift indicator, and auto headlamps. In terms of safety, there are dual-front airbags, ABS with EBD, hill-start assist, traction control, brake assist, speed sensing and impact sensing door locks, and ISOFIX. However, the Magnite does miss out on features like a sunroof, leather upholstery, and more airbags. 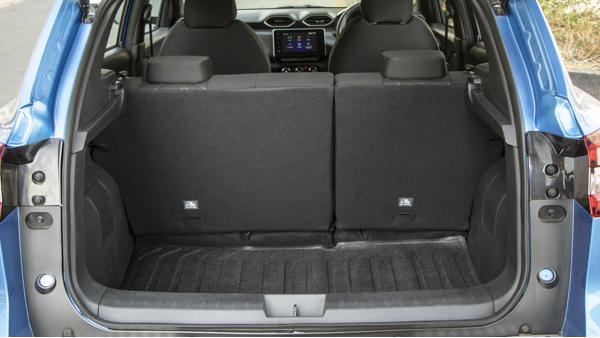 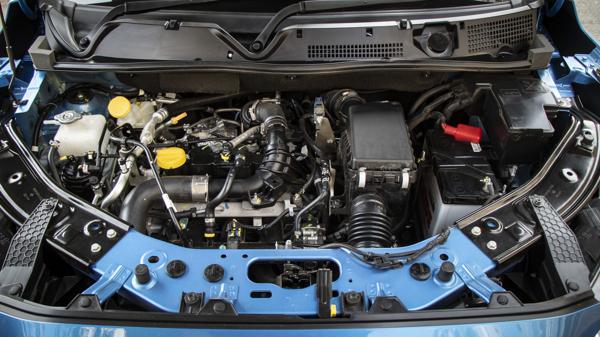 Under the hood of the Magnite is Nissan’s new 1.0-litre HRA0 turbo-petrol motor. You can have it either with a CVT automatic or a five-speed manual. This three-cylinder motor produces 98bhp of power at 5,000rpm and 160Nm of torque is accessible between 2,800-3,600rpm. Crank up the motor and it settles into a silent idle, but there are prominent vibrations that are felt filtering inside the cabin. But it’s not a deal-breaker at all. We felt the clutch has a tad heavier action to it than necessary. There’s also a slightly spring-back feel, but you immediately get used to it, owing to the peppy nature of the engine. Off the mark, the motor needs a constant throttle input to keep going and there’s considerable lag below the 1,800rpm mark. You’d need to work past it and that’s when you are welcomed by a strong mid-range where the throttle response sharpens up and the engine feels more eager to drive. At city speeds, pottering around at 2,000rpm mark should do the trick as the motor feels very usable with little to no dawdling. 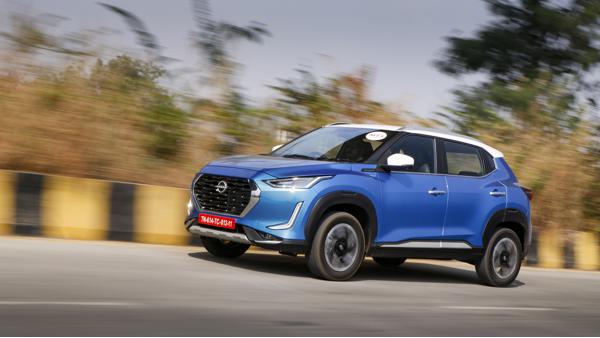 A good chunk of power is available in the mid-range so there’s barely any need to rev the engine to its 6,000rpm redline. Even the power tends to taper off closer to redline. So, for highway speeds, it’s better to ride the strong mid-range torque where it would easily keep up three-digit speeds and does not feel like wanting for more. Tipping the scale at 1,014kg (kerb), the Magnite is comparatively a light car. And this helps with the driving dynamics too, as the motor doesn’t feel like it has a lot of weight to lug around. 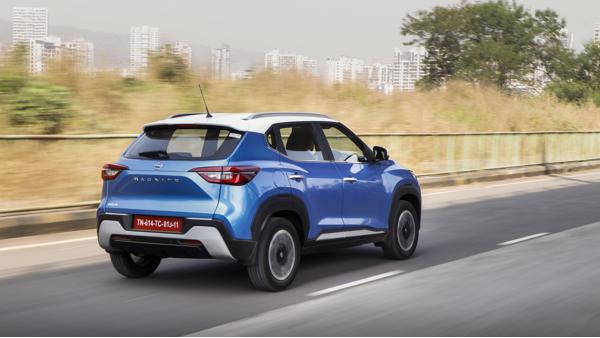 Now let’s talk about the CVT automatic. And right off the bat, the Magnite feels peppy. Nissan has managed to tune it extremely well to reduce shift shock and the rubber band effect that CVT gearboxes are known for. It is so good that if you modulate the throttle well, it is hard to notice that this is a CVT gearbox. Acceleration is peppy and there’s plenty of torque at hand which makes overtaking and munching highways a relaxed procedure. Lastly, Nissan also claims a fuel efficiency figure of 17.7kmpl for the CVT and 20kmpl for the manual version. 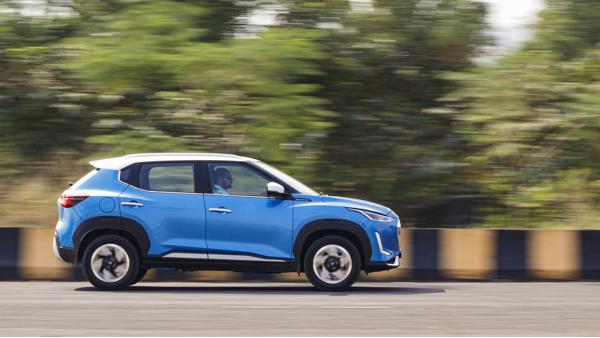 As for the ride quality, the Nissan seems to have tuned the Magnite for urban habitation. At slower speeds, the suspension setup is soft and very pliant. Everything from small irregularities to criminally-large potholes is well-absorbed without unsettling the occupants. Even the sharp-edged bumps are well taken care of. But when you go faster, the ride seems to lose its poise. There are thuds sent on the inside. On the upside, the 205mm of ground clearance is at par with the rivals and won’t bother you even in the trickiest of urban off-roading. The steering is slightly vague off the centre and there’s not much feedback either. That said, it is quite livable at slow speeds and when the speed increases there’s a good amount of weight added to it as well. However, we’d have loved a slightly better high-speed composure. As for the brakes, they do a good job for city usage, but they lack that solid feel at highway speeds. 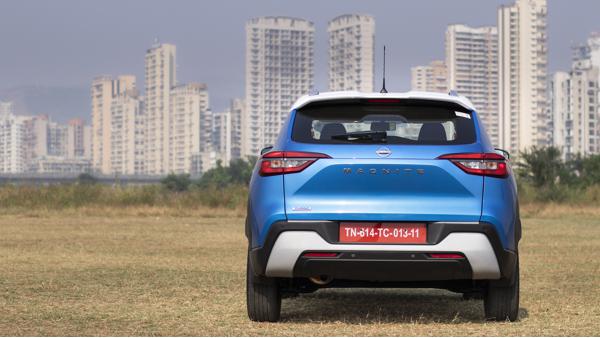 When launched on 2 December, the Nissan Magnite range is expected to start at Rs 5.5 lakh and will go up to Rs 9.5 lakh (ex-showroom). So, the Magnite has a huge task at hand. With its strategic pricing, it needs to get Nissan the sales numbers that have eluded the Japanese manufacturer for a long time. While at it, it will also have to take on some much-established competition. What works in its favour so far are – good design, spacious cabin, loads of features, and a peppy powertrain. It could, however, do with better suspension and steering setup, and better quality of materials on the inside. But these aren’t a deal-breaker in any way. We just hope Nissan sorts out its dealership and service network because the Magnite is a product with a lot of potentials. 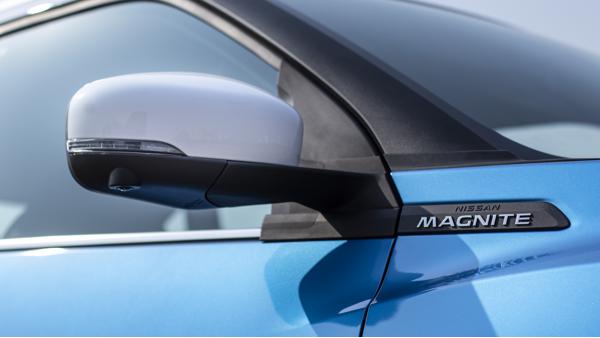 Note: Specifications for Magnite XE have been mentioned 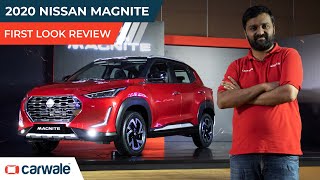 Nissan Magnite First Look Review | Could This Compact SUV be the return for Nissan India ? | CarWale
10/21/2020 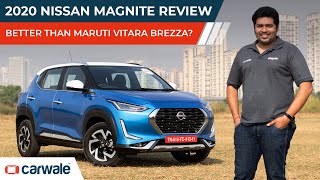 Nissan hikes prices of Magnite range by up to Rs 17,000

Nissan India has increased the prices of the Magnite by up to Rs 17,000 with immediate effect.