The Renault Triber was launched in 2019 with a major update in early 2021. It is available in four variants - RXE, RXL, RXT and the RXZ. The seven-seat vehicle gets the under four-meter price advantage and is limited to a petrol engine option. Renault boasts of offering more than 20 key features as standard across all trims.

The interior of the Triber gets a black and beige combination with three rows of seating and the last row can be removed completely to access a 625-litre boot.  Moreover, the second and third-row can be folded in various combinations or as Renault puts its “modes” for extra space. The top-spec RXZ variant gets an AC with second-row vents, steering mounted audio controls, height adjustment for the driver’s seat, power folding ORVMs, a cooled glovebox, multiple storage spaces, dual front glove boxes and a touchscreen infotainment system with Apple CarPlay/Android Auto.

The Renault Triber features the signature Renault grille and projector headlamps, while the sides get a black cladding and flared rear wheel arches. The company claims that its unique body style bridges the gap between the Kwid and Renault’s SUV offerings in India.

The Renault Triber is powered by a 1.0-litre three-cylinder petrol engine that generates 72bhp and 96Nm of torque. Currently, the engine comes mated only to a five-speed manual transmission, while a five-speed AMT, dubbed Easy-R, is available from the RXT variant onwards. The car is expected to be offered with Renault’s 1.0-litre turbo petrol from 2022 onwards.

Find a list of all 8 petrol versions of Renault Triber. This table includes on-road price which covers all costs like RTO and Insurance. As such, this Renault seven-seater MPV plugs the growing demand from those who appreciate space and two-pedal comfort without ripping a hole in their pocket. What you see in the images is the automatic iteration of the Renault Triber. Badged the ‘Easy-R’, an AMT gearbox performs transmission duties here, alongside Renault’s 1.0-litre Energy petrol engine. As such, this Renault seven-seater MPV plugs the growing demand from those who appreciate space and two-pedal comfort without ripping a hole in their pocket. So does the Triber in its AMT form make any sense? Let’s find out. Other than the 'EASY-R' badge on the boot lid, it’s all the same story. This compact MPV (under-four-metre) attracts owing to the handsome design lines that’re amplified by the bright orange shade. On closer inspection, the lavish use of chrome to in-turn highlight those handsome lines all across the fascia becomes evident. It takes the visuals to a totally different level, especially with the chunky side cladding, slicing-sharp alloys, and the strong shoulder. Viewing the rear portion may not have one salivating, but by compact MPV standards, we think Renault did an exceptional job to keep the adrenaline flowing. As expected, when compared to the manual variant, it’s only the AMT gearstick and the lack of a clutch pedal that’s apparent. Since it’s the same cabin, ergonomics remain spot on with the contemporary multi-layered dashboard and functions all around. Likewise, all control knobs/switches are well finished, especially the conveniently placed start-stop button with its beautiful ornamental styling. But importantly, we feel the quality of plastic isn’t a deal-breaker at this price point (starts at Rs 7.59 lakh OTR Mumbai). As for the front seats, they’re placed high for good visibility, and have apt padding for both comfort and proper support. Although comfortable seating for six occupants can be easily achieved, the adjustable nature of the second row makes it reasonably effective even for seven occupants. Wherein, there's adequate knee-room for occupants in all the three rows. Helping its cause is the carved rear section of the roof that liberates enough headroom. There are air vents for the second and third row too. Interestingly, the last row of seats are not just foldable but can be completely removed from the car. This boosts practicality since the boot which can otherwise only hold two soft bags (all the seats up), swells considerably to an impressive 625-litres. As for features, this top-end RXZ AMT variant gets a large touchscreen with numerous charging points, keyless-entry with push-button start, power windows all over, electrically adjustable door mirrors, and a digital instrument cluster. On the safety front, there are four airbags, ABS with EBD, rear parking sensors, and a camera. Under the hood of the Triber AMT is Renault’s 71bhp/96Nm 1.0-litre three-cylinder petrol engine that’s mated to an ‘Easy-R’ five-speed AMT transmission; one that’s also seen in its younger sibling Kwid. Although this isn’t one of the quieter petrol motors, they’ve done well to insulate the cabin from its harshness. As you slot the gear lever in ‘D’, the Triber begins to creep ahead slowly and purposefully with the ‘traffic-assist’ feature which also prevents it from rolling backwards on inclines. On the go, one thing’s for sure, flooring the throttle is absolutely useless because of the apparent lack of low-end torque. You’ll eventually realise that it's a no-brainer to just drive this car slow, which makes sense in the city anyway. Surprisingly the AMT gearbox isn’t slow to respond. We soon found out that the gearbox likes to upshift at about 2,500rpm with moderate throttle inputs, and between 3,500rpm-4,000rpm when asked for more. Overall, keeping the revs in the midrange, between 2,500rpm and 3,500rpm, aides in swift commutes. Then, there’s the manual mode, which allows you to shift gears as you please. This makes the most sense when you need total control of all the horses being whipped out. What’s also nice is that the system lets you rev all the way to the 6,000rpm redline before it shifts automatically for you (to save the gearbox). Thankfully, the AMT lag isn’t as jerky as you’d expect it; which is appreciated. As for highway cruising, more often than not you will feel the need for extra grunt, especially when fully loaded. This makes it particularly necessary to plan your overtaking. The Triber’s robust suspension has a taut setup that absorbs shocks from rough roads at any speeds exceedingly well. Having said that, it needs a special mention that over the harsher bumps, some suspension noise can be clearly heard inside the cabin. Better still, the adequate clearance mated to the 15-inch wheels means there’s no need to worry about clearing those unexpected tall obstacles. Being a Renault has its benefits, which is evident in the chassis balance being quite sorted. But that’s only as long as you go sanely around corners. Yes, knowing Renault, it would have been better had the steering response been more progressive. Nevertheless, it’s reasonably quick, fairly light at slower speeds and weighs up appropriately as the velocity climbs. On the flipside, braking felt muted, more so under panic braking situations. The Triber Easy-R AMT, which ranges from Rs 7.59 lakh to Rs 9.11 lakh (OTR Mumbai) is a value-for-money package that’s roomy, looks sporty despite the MPV stance, has class-leading features, and now also benefits from the convenience of being an automatic. Moreover, you could also consider it to be a large five-seater with a big boot, along with the added capability of seating two more passengers when required. Now isn’t that the kind of ‘bang for your buck’ bundle that we Indians just crave for. I’m loving it!

The on-road price of the Renault Triber in Delhi starts at ₹ 5.67 Lakh for the petrol engine. Meanwhile, the top end model (Triber RXZ EASY-R AMT Dual Tone) with petrol engine is priced at ₹ 8.25 Lakh.

Renault Triber is a 7 seater car with 5 doors.

No. Sunroof is not available in any of the 8 versions of the Renault Triber.

No. 4x4 drive option is not available in any of the 8 versions of the Renault Triber.

Note: Specifications for Triber RXE have been mentioned 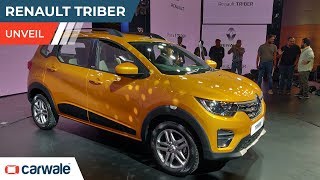 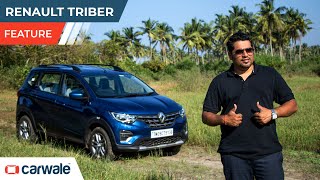 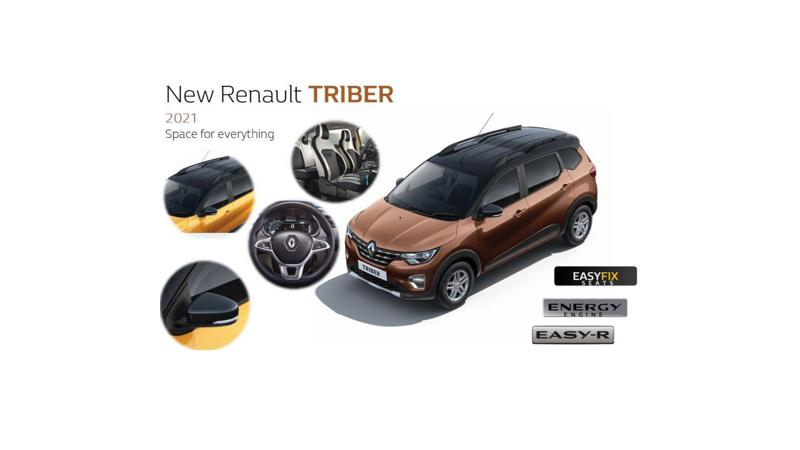 2021 Renault Triber leaked; likely to be launched in India soon

The Workshop On Wheels-Lite is a mobile workshop on a two-wheeler equipped with a tool-box to undertake minor service, repairs, and other related jobs for all Renault vehicles along with the provision to carry parts and consumables.

2021 Renault Triber launched Renault India has launched the 2021 Triber, with prices starting at Rs 5.30 lakh (ex-showroom, Delhi). The prices of the model have been hiked by Rs 10,000 to Rs