Tesla is in talks with the government of India to relax the import duties on its cars temporaririly until a local factory is built.

Elon Musk, CEO, Tesla tweeted “In discussions with the government of India requesting temporary relief on import penalties/restrictions until a local factory is built” when someone on twitter asked him about his India launch plans. The company wants to begin its India operations with the launch of the Model 3. In fact, many Indians have booked this electric car. However, due to the current FDI policy for single brand retailer, Tesla is unable to begin its sales in the country. 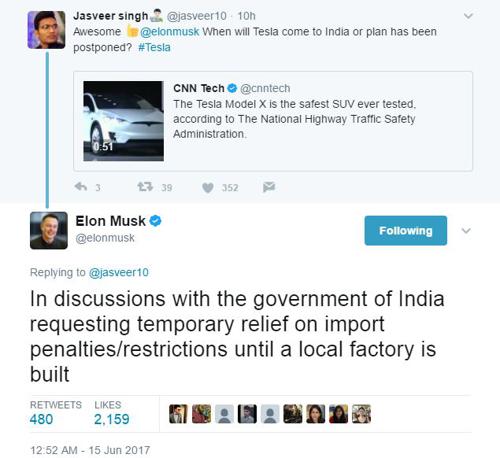 Tesla sells cars through company-owned showrooms and doesn’t appoint any dealers for the same. Due to its business model, Tesla will be known as a single brand retailer in India. The current FDI policy says if a single brand retailer wants to carry out business activities in India, the company needs to source 30 per cent of the goods from within the country. This is not possible for Tesla as of now, as it doesn’t have any facility in India. But it looks like the American EV maker wants to set up a factory in one of the fastest growing car markets in the world.

Koenigsegg sells out the Regera