Nissan is betting high stakes on the Datsun Go hatchback, which was showcased on Monday, July the 15th. The proceedings had an air of excitement as the Japanese auto maker commenced its plan to revamp the Datsun brand, which was last seen on the Indian roads in the year 1981, over three decades ago. Carlos Ghosn, President and Chief Executive Officer, was among the most enthusiastic people present at the event. Ghosn spoke at length about the Go and communicated the fact that Nissan is pining a lot of hope on the hatchback to lead Datsun's revival in the world. He was pretty open about the company's expectations, which involved lofty targets and ambitions Nissan is confident of achieving. 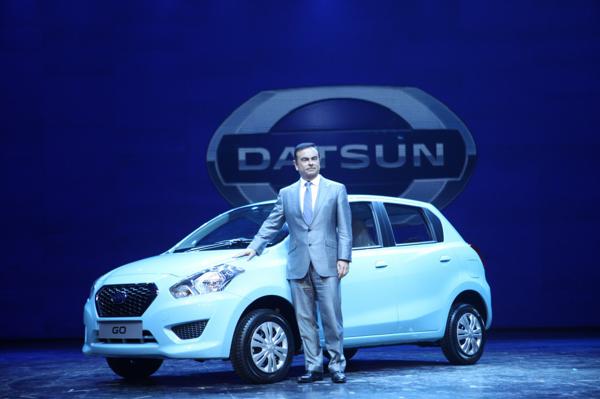 Ghosn also said that his enthusiasm was due to the efforts and intensity of his involvement in conceptualising, planning and executing the revival of Datsun. According to him, the Renault-Nissan-Datsun alliance plans to achieve a market share of 15 per cent from the current 5 per cent. Experts say that the Go hatchback is likely to be a hit among young people looking for a car that is value for money.

As Ghosn and his subordinates were involved in the zealous launch of the Go hatchback, the car market showed no signs of improvement as sales decreased for a record consecutive eighth month. Ghosn, ill-bothered by the slump, said "Hey come on! My god. You just wait for a few months and it will be over.... What we are seeing is a correction, not a slowdown... it will be over by the year-end."

According to company claims and some industry experts, the Datsun Go is a hatchback developed for emerging markets, beginning in countries like Russia, Indonesia and India, and subsequently moving on to other parts of the world. Ghosn said that the emerging car markets would have a share of 60 per cent in the global auto market by the year 2016. Datsun, looking to compete with Maruti Suzuki and Hyundai, will mainly target the compact car segment. "Our strategy is not against competitors. Our strategy is for Indian consumers," Carlos Ghosn.

Ghosn has earned himself a great name in the history of Nissan as he lead the company to a state of profitability from bankruptcy in the early part of last decade. He has his faith firmly rooted in the fact that there is a requirement for an ultra-low cost car for a major part of the population. Not taking the Tata Nano into account, he said “There's a huge need for this car that nobody has addressed yet. I hope we would answer that in the future. We'll continue to work on it."