Ashok Leyland, country's one of the leading commercial vehicle maker, will be entering the passenger car segment of the Indian market on July 16 with the launch of an entry level Multi Purpose Vehicle (MPV), Stile. Sources close to the development process revealed that the upcoming model from Ashok Leyland will be based on the Nissan Evalia and will be an eight-seater model. The key exterior highlights of 2013 Stile will include an eye catching front fascia, featuring new grille and head lights. In order to stand apart from the Nissan Evalia, the upcoming Stile will feature green and blue decals at its both sides. 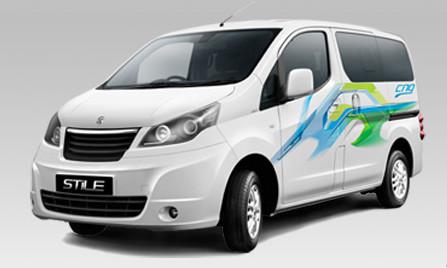 However, the MPV will feature the same 1.5 litre dCi diesel engine, sourced from Nissan, which will churn out a maximum power of 83 bhp with an alarming torque of 200 Nm. Adding to the performance of this engine, it has been mated to a five-speed manual transmission system, which is expected to offer smooth shifts while switching gears. It must be noted that a petrol version of Stile will also be introduced in the Indian auto market; however the details are yet not disclosed by the auto maker.

Industry experts are of a view that the Ashok Leyland will offer a CNG compliant version of Stile to the price sensitive Indian buyers. Coming to the pricing of the upcoming utility vehicle, it is expected that Stile will be placed under the Evalia. The launch of a new model in the utility vehicle segment of the Indian auto market, despite market slowdown, is a clear indication that car makers have a blind faith in the potential of this segment.