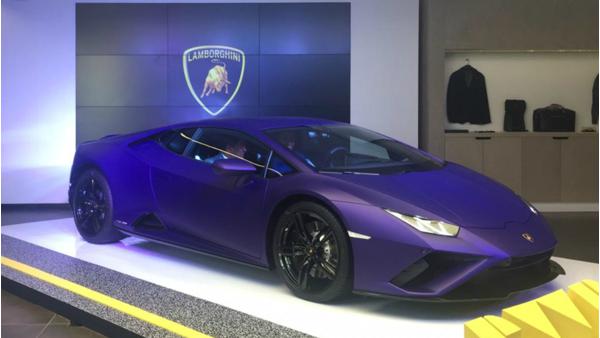 Lamborghini Huracan has launched the Evo RWD India, with prices starting at Rs 3.22 crores, (ex-showroom, all India). This is the third variant of the Huracan Evo to be launched in India, following the Evo Coupe and the Evo Spyder.

The Lamborghini Huracan Evo RWD is powered by the same naturally aspirated 5.2-litre V10 engine capable of screaming all the way over 8000rpm, but has been detuned for safety. Evo RWD drivers will have ‘only’ 610bhp under the command of their right foot, instead of the 640bhp of the AWD Coupe or the 631bhp of the AWD Spyder. A 33kg reduction in weight and a quick-shifting seven-speed dual-clutch transmission compensate for the loss of power, making the RWD only 0.4-seconds slower in the 0-100kmph sprint as compared to the AWD Coupe. Top speed remains a ballistic 325kmph.

Visually, the new Huracan Evo RWD does get subtle upgrades on the outside to differentiate itself from its AWD brethren. Changes include a less aggressive-looking front bumper, 10-spoke 19-inch black alloy wheels and a slightly more complicated rear diffuser. The front and rear design changes have improved aerodynamics and cooling, claims Lamborghini. The rear diffuser develops more downforce than the AWD versions for better control, especially during cornering/drifting.

Apart from the natural dynamic enhancements due to a rear-wheel-drive setup and lower weight, the aerodynamics, steering mechanism and traction control system of the Lamborghini Huracan Evo RWD have been designed specifically to make the model livelier. The Lamborghini Dynamic Steering reacts to drifts and slides better, giving more feedback to the driver for better judgement and thrills. Better cooling for the engine and brakes mean they can handle the issues generated by longer slides/drifts better. The new Performance Traction Control (P-TCS) allows more slip and longer drifts before reducing power in Sport mode, but also works to improve grip in Strada (on-road) mode during slippery conditions or sharpen traction on corner exits in Corsa (race) mode.

Ford Figo based sedan likely to make debut in 2014