India days away from the launch of Ford EcoSport

Ford India Private Limited, a completely owned subsidiary of the American auto maker Ford Motor Co., is just days away from the launch of its much hyped EcoSport model in the domestic car market on June 26, 2013. The company has already started taking booking orders in advance for the new EcoSport compact Sports Utility Vehicle (SUV) across select dealerships in the country. As per reports, the Ford President and Chief Executive Officer (CEO) Alan Mulally could officially launch the EcoSport in New Delhi next week. 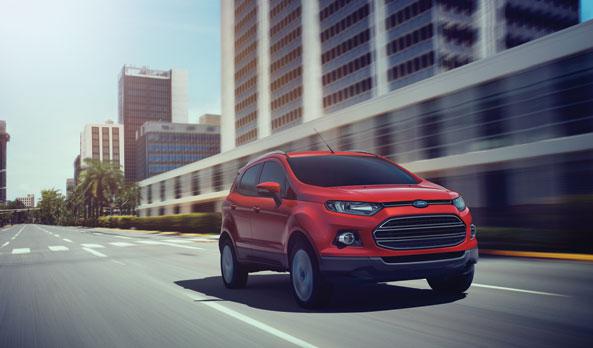 India days away from the launch of Ford EcoSport

Just a while back, Mulally had congratulated Ford India’s employees on the first batch of EcoSport shipments in Chennai. Speaking his mind on the stylish new compact SUV Mulally was quoted as saying, “The EcoSport looks fantastic. The Chennai team, together with our supplier partners, have done an outstanding job in delivering our customers a great looking, fuel efficient, safe, compact utility vehicle with impressive functionality and connectivity, at a very affordable price.”

The India-spec Ford EcoSport range will have three power-mill options, including a 1.5 litre DV5 petrol, a 1.5 litre TiVCT petrol and the winner of 2013 Engine of the Year award- 1.0 litre Ford EcoBoost turbocharged petrol. The critically acclaimed EcoBoost petrol engine will be equipped in top-end variant of the EcoSport range and develops a class leading power output of 123 bhp, along with an impressive mileage figure of 18.9 kmpl.

Ford India will pitch its new EcoSport model in a stiff competition against the likes of Renault Duster, Maruti Suzuki Ertiga, Mahindra Quanto and Premier Rio in the compact utility vehicle segment of the Indian auto market. The company is expected to introduce the new EcoSport within an introductory price band of Rs. 8 to 10 lakh in the country. Industry experts have pegged the upcoming Ford EcoSport to become a game changer for the American auto maker in the Indian automobile industry.

Launch of 2013 Skoda Octavia seems around the corner