Nissan, the Japanese auto maker, has been one of the most active entities of the Indian car market in recent times. A series of recent events has seen the car maker appear in the news consistently. Some of these events include the unveiling of Datsun Go, building of car engines with Renault, launch news of Terrano Sports Utility Vehicle (SUV) and introduction of the facelifted Micra hatchback. This trend seems to be continuing as some sources on the Internet leaked pictures of the facelifted version of the Nissan Sunny, fuelling speculations about the car coming to Indian market in the near future. 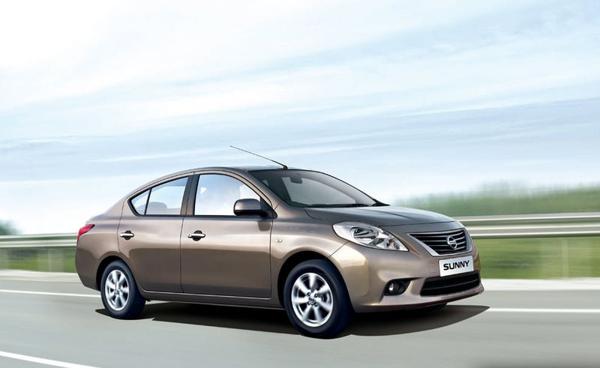 It must be noted that of late, the Japanese car maker had introduced a facelifted version of the Micra hatchback in the Indian auto market. Several rumours have risen due to the leaked images of the facelifted guise of Nissan Sunny. Sources say that the new Sunny will be just a stylised version of the current generation model. Drawing a parallel with the changes made in the Micra, it is believed that the new Nissan Sunny will feature new headlamps, front bumper and more number of chrome accents. Analysing the images, it is expected that the new version is going to look more aggressive than the existing one.

Pictures revealed on the web were unable to capture the interiors of the new Nissan Sunny. However, some analysts feel that the top variant will be equipped with an added glove box. Another possibility is that of Nissan introducing an XV premium variant, which will feature four airbags and a reversing camera. In terms of the engine options, Nissan is likely to retain the existing specifications.

Currently, the Nissan Sunny comes with two powertrain choices, namely the 4-cylinder HR15 1.5-litre petrol and K9KE424 1.5-litre diesel. The petrol variants of the Nissan Sunny with manual transmission are named XE, XL and XV, which render a peak power output of around 99 bhp at 6000 rpm and torque of up to 134 Nm. In addition, there is a Continuously Variable Transmission variant called the Nissan Sunny XL CVT, which produces around 101 bhp at 5600 rpm. On the other hand, the diesel versions, named XL and XV, have a maximum power of 86 bhp at 3750 rpm and torque of 200 Nm at its disposal.

Nissan is expected to retain the USP of Sunny in its new model as well. Nissan Sunny is an incredibly spacious vehicle that provides a high amount of leg room for the rear passengers as well. If one were to compare the package on offer with respect to price, Sunny ends up being half the cost of cars from other makers. However, in recent times, Nissan Sunny has not managed to perform well, according to its potential. Statistics from the Society of Indian Automobile Manufacturers (SIAM) reveal that only around 1100 units of Sunny were sold in May 2013, which is a drastic drop in comparison to the corresponding period in 2012.

A section of Nissan dealers across the country have said that the unimpressive appearance of Sunny has been one of the reasons for drop in company's sales. Needless to say, it is a clear indication that the appearance of a car is an important part of the package to lure the domestic buyers. Industry experts feel that the Japanese auto maker will be looking to target the young buyers of Indian car market by launching the facelifted version of Sunny.