German engineering is back again with a new sedan for the segment of Indian customers who seemed in the recent past to not have much choice beyond the Honda City. Volkswagen Vento is coming up as the next big challenge for the model that is the bread winner for Honda Siel in India. So does the new Volkswagen Vento have what it takes to become a success story in the Indian sedan segment where customers are conscious of getting value for money? 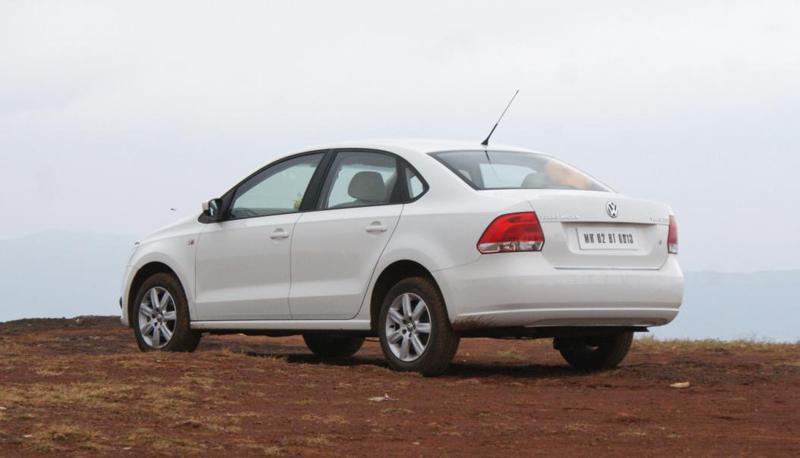 German cars have always been known for their strength and power, and Volkswagen has not been lacking in luxury quotient, while maintaining an individuality of its own. Today we take a closer look at the Volkswagen Vento and take it for a spin.

Volkswagen Vento has evolved from the Polo platform and the car has been oftentimes introduced to Indian customers as the Polo sedan. As such, design cues are strikingly similar to the Polo models, and at least the front end definitely gives the unmistakable impression of being a Polo hatch. Only a sideways look allows you to know that the car has been stretched after the B-pillar to convert it into a sedan. 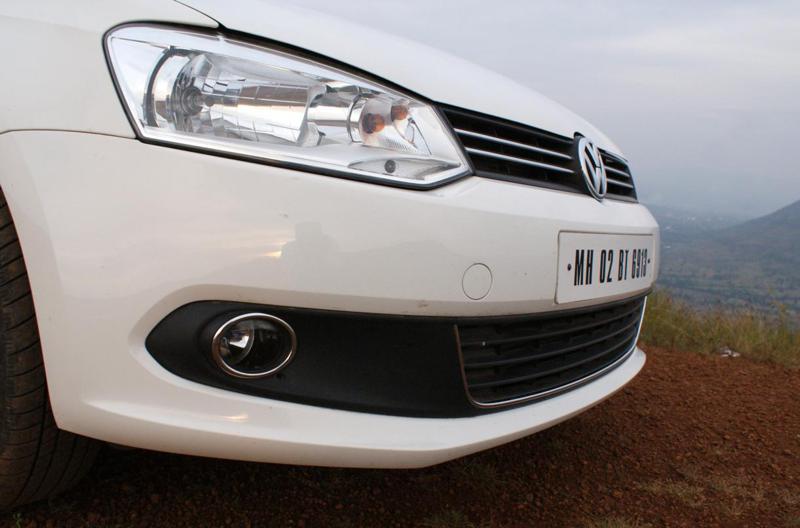 The car has been modelled in a seamless flow right from the bonnet to the boot. Clear crisp lines run along the body contours giving it a tough yet classy statement of its own.

The car’s overall design has been well-designed with crisp outlines and the three box piece has been well-balanced to give an attractive sleek look. For a change, the boot does not share similar the opening as a VW Polo and Skoda Fabia model where you open the boot lid by depressing the brand logo.

Highline model bears discreet chrome accents which are also present around the fog lamps as well the front grille. Highline variant also bears body door coloured door handles and mirrors while the mid-variant Trendline gets only solid colours for the body.

German cars are performance and luxury balanced on similar scales. If under the hood the car features a strong engine, the interiors boast of special seat cushions that are comfortable and strudy at once. There is huge storage space in the front and along the sides for front as well as the rear passengers. 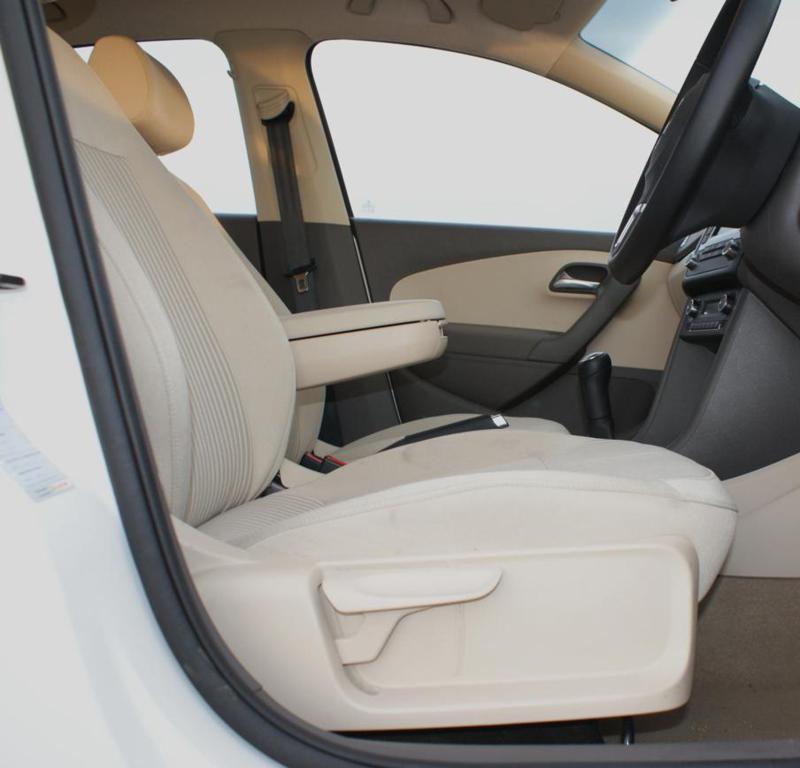 The dashboard is wrapped in two-tone interiors of black and beige. The high end model features premium sound system, climatronic AC, air vents and a large glove box as well. Volkswagen has given a thought to the rear seat passengers as well as the seats have been well-designed with thigh support. This means added comfort to rear passengers on long-haul journeys. However, the front seats could have done with more back support.

One of the first features in the segment is the Spacemax control. The feature is available only in Highline variant and allows the read passenger to push the front seat effortlessly to the front. This is something rear seat passengers are going to enjoy.

The overall quality of plastics and the interiors are definitely European and of high quality, and this is one place where the car is going to score points against Japanese and Korean competitors.

The Volkswagen Vento comes with a 1598cc, 4 Cylinder, 8 Valve engine in both petrol and diesel, delivering a maximum power of 105 bhp in both and maximum Torque of 255 Nm in diesel version and 153NM in Petrol. 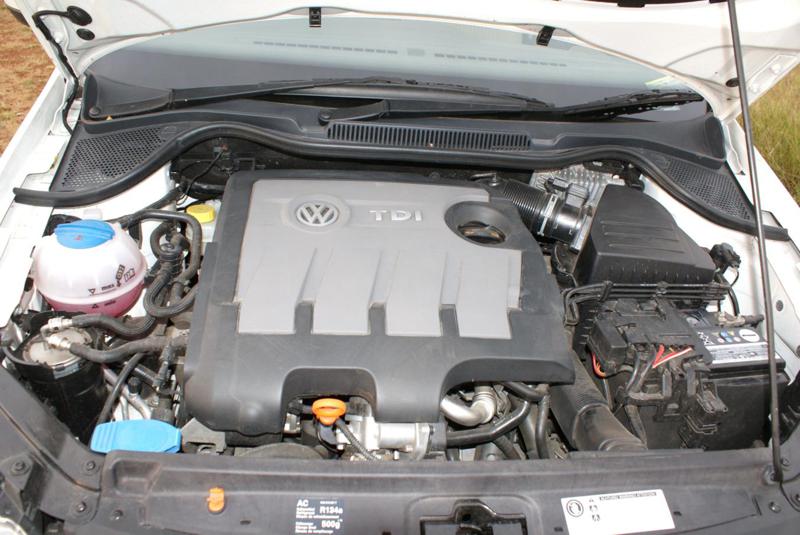 The standard Vento Gearbox is a 5-speed manual gearbox and the engine features a 4-valve head along with double overhead camshaft. In petrol version, there is an automatic transmission available with a 6 speed box in the Highline variant. The claimed fuel efficiency of 15KMPL in petrol and 20KMPL in diesel for 1.6 Litre engine is quite impressive.

All in all, the Vento comes in 7 variants in which Trendline, trendline metallic and Highline are common for both petrol and diesel variants . Additionally, the petrol version has Automatic transmission version in Highline variant. The car is packed with several active and passive safety features like advanced high chassis, side airbags, rigid body shell, five three-point seat belts, ABS, and EBD. The diesel and petrol Vento compete with a number of models in their class. The below table gives a comparison with prominent competitors and their respective top end models.

Volkswagen cars come with style and luxury that are driven by performance oriented engines. This means Volkswagen Vento is a good addition in entry level sedan segment. The car has lot of leg room as not an inch of space has been wasted inside and out. One of the shortcomings we could state, is that the dashboard could have been made more impressive.From comparison it can be concluded that Vento is in par with other competitor models and the main strength of Vento is its German quality and sense of newness. 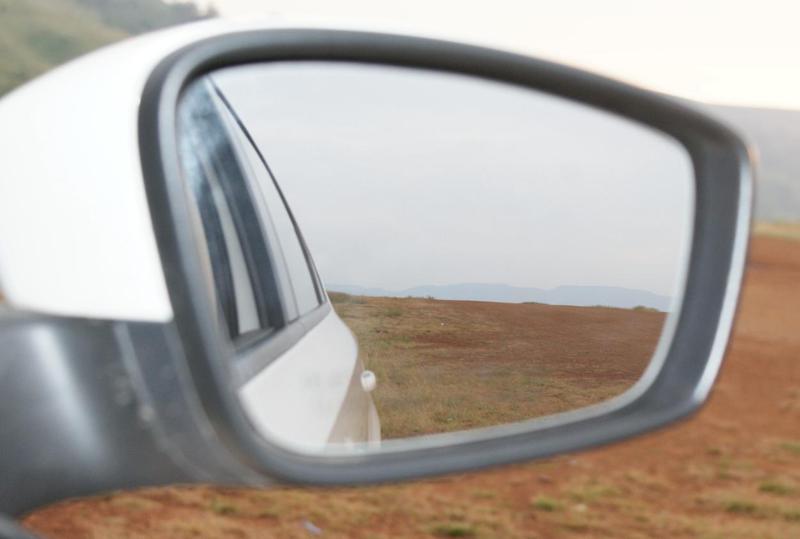 Getting into the Vento is very easy, given the wide opening doors in both front and rear. Once we sit and close the door, one immediately notices an excellent build quality of body and the car exudes a sense of safety inside.

Once we switch on the ignition, we are welcomed by the low noise engine with promising power of 105 BHP in petrol version. The ORVMs are electronically operated and give a good view, making it easy to take out the car from parking lot.

The car’s turning circle radius of 5.4M which is acceptable for city use. While driving the car, the Vento gives a sense of comfort with a smooth performance and controls, and the clutch is easy to operate.While we drove the car around the city, it was clearly appreciated by passers-by for its executive looks and the brand Volkswagen, confirming the sleek look of the car. The ground clearance is in par with Indian standards and makes it easy to handle road Humps.

The Vento has a powerful pick up and the performance is great, giving a very good drive quality with smooth steering, and gear shift. There is a good amount of leg room and head room for the driver, ensuring comfort for long drives at a stretch.

With the background of the success of the Polo, VW has taken a good initiative in launching sedan in the 10 Lakh segment in a wide range of variants, including automatic transmission.

Overall, VW has come up with a complete solution in providing an attractive sedan in 8 to 11 lakh range. Moreover, now VW has ensured faster progress and has for example come up with 3 dealer outlets in around Bangalore city as well as many other cities.

Thus, for anyone looking for an high quality, entry level sedan, the VW Vento is surely a valid alternative.

The New Ford Fiesta: More than just a refreshed look?