Toyota Motor Corporation, the much appreciated Japanese auto maker, seems all set to introduce its new Corolla on the global platform on June 6, 2013. Interestingly, the auto maker showcased its cutting edge model in January this year and was able to garner good reviews from the industry experts. Reportedly, the model has been inspired from the next generation Corolla Furia Concept, which was showcased at the Detroit Motor Show. The flared bumpers, angular design cues and steeply raked windscreen are likely to target the young section of buyers. It is believed that the new Toyota Corolla will deliver a stiff competition to Honda Civic, Hyundai Elantra and Ford Focus, which are all offered in their revamped versions. 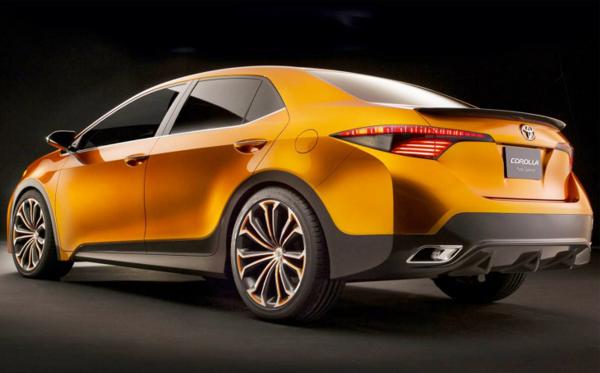 Similar to its exteriors, the interiors of the upcoming model will be brand new and will feature a new designing language. According to sources, the new Corolla will come equipped with an advanced infotainment system and several other breadth taking features. It is expected that the model will be offered with black interiors in the European markets, while the Indian-spec model will be loaded with dual-tone colour package.

Although the exteriors and interiors will feature drastic modifications, the model is anticipated to come equipped with either a similar 1.5 litre diesel engine or 1.8 litre petrol engine. The maximum power churned out by the diesel engine is believed to measure close to the 85 bhp. On the other hand, the petrol powertrain has been upgraded with both exhaust valves and variable intake in an attempt to enhance the fuel efficiency and performance of the model. Reportedly, both the engines will be mated with a six-speed manual transmission system, along with a Continuous Variable Transmission (CVT) automatic gearbox on offer.

It must be noted that since 1997, Toyota Corolla has been tagged with the award of world’s best selling car. In 2012, the auto maker sold more than 1.2 million units globally, which was a milestone for the Japanese auto maker. With the launch of a new model, the auto maker is looking ahead to maintain the position of their flagship model on sales chart as the new Corolla will target the young buyers.