New-generation Honda Accord to Launch in 2016

Honda, the Japanese automaker, has confirmed that it will launch the new-generation Accord luxury sedan in India in 2016. The President and CEO of Honda Cars India (HCI), Katsushi Inoue said that the company is planning to re-introduce Accord, and its hybrid version in the Indian market. The premium sedan was discontinued in 2013 due to poor demand in the segment. With an aim to improve its segment shares, Honda will re-introduce the 9th generation of the Accord, which was showcased at the 2014 Auto Expo.

Coming to the design, the new-gen Accord will feature a larger chrome grille, LED detailing on the headlight enclosures, modified front and rear bumpers, an integrated rear spoiler and chrome headlights for rear bumper and bootlid. For the American market, the saloon might get a tuned V6 engine with direct injection system and a new 9-speed automatic transmission. 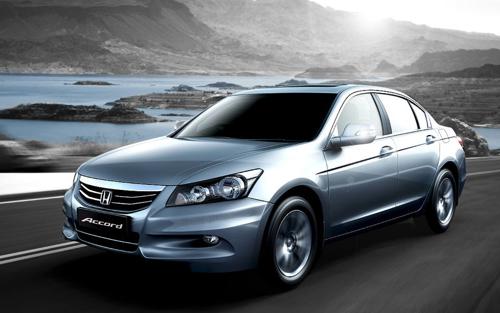 The India-bound model, on the other hand, is likely to be offered with a new 2.4-litre, four-cylinder petrol engine. This powertrain will deliver an estimated power output of 177bhp, which is equivalent to the phased-out model. A 1.6-litre diesel powertrain might also be on offer. Though, the company hasn’t yet confirmed the engine details of the India-bound model. Honda might also tweak the suspension of the car for better handling.

Upon its launch, the 2016 Honda Accord will take on the likes of Skoda Superb, Volkswagen Passat and Toyota Camry. It is expected to be offered within the price range of Rs. 20 lakh – Rs. 25 lakh.