This latest generation Toyota Camry that is underpinned by the Japanese automaker’s TNGA platform was launched for the Indian car market in early 2019. The updates for this 12th generation Camry includes the likes of a completely new cabin and a wide variety of comfort and driving features. The Japanese automaker has given the car a sporty design which it has dubbed the ‘Keen Look’ design language. The Camry is a CBU and is only available in a single top-of-the-line hybrid version for the Indian car market.

This eighth-generation Camry’s exterior design highlights include the likes of swept-back LED headlamps with very distinctive three-bar boomerang-shaped DRLs that help the car’s face stand out from the crowd. The large grille on the face lends a much more aggressive stance over its predecessor making sure that you notice the car in a crowd.  Given its massive size, the sleek and elongated sides with 17-inch multi-spoke alloy wheels do well to complement the sporty fascia. The rear gets a sleek pair of tail lights which gives it a very European premium sedan appearance.

In terms of design and layout not much has changed from the seventh generation car because it was quite good, to begin with. What Toyota has done is updated the feature list that includes an all-black cabin, ambient lighting, multi-zone climate control, power driver’s seat, ability to control and a nine-speaker JBL music system, a leather-wrapped steering wheel with audio controls, cruise control and wireless charging. The centre console is highlighted by a new eight-inch touchscreen system. Safety features include 10 airbags, ABS with EBD and traction control.

Under the hood, the new Toyota Camry is powered by a 2.5-litre hybrid-petrol powertrain that produces a combined power output of 215bhp and 221Nm of torque. The engine comes mated to a six-speed CVT transmission and the power is sent to the front wheels. 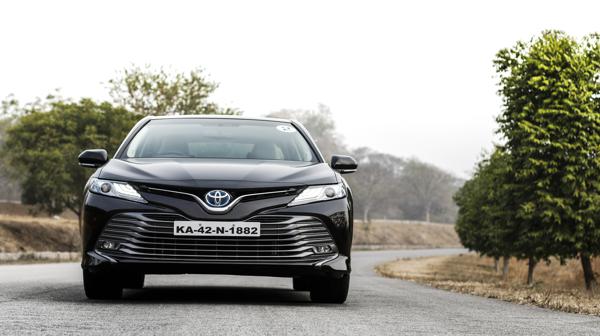 However, the carmaker believes that, for a country like ours which is still so heavily dependent on coal for power generation, a hybrid is the best bet in the short and mid term. And so, to show its intent, Toyota has launched the latest generation Camry Hybrid in India. And this is what we thought of it after driving it.

The Camry is long and low. And it has traditional sedan proportions - a long hood and a relatively stubby boot. In its eighth generation now, the Camry's design has finally gotten some spunk. 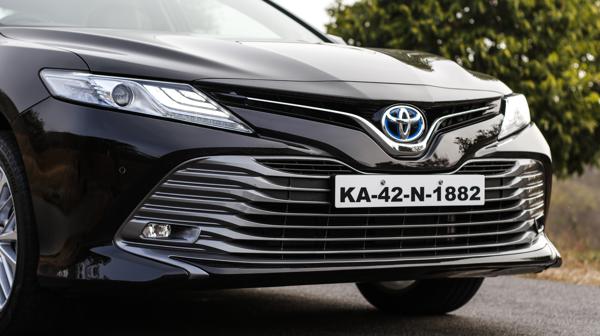 It's still more luxurious than sporty in its design. And, with those LEDs, the chrome highlights, and the gaping front bumper, it has its fair share of bling as well. The 18 inch wheels shod with low profile tyres further add to the car's visual appeal. 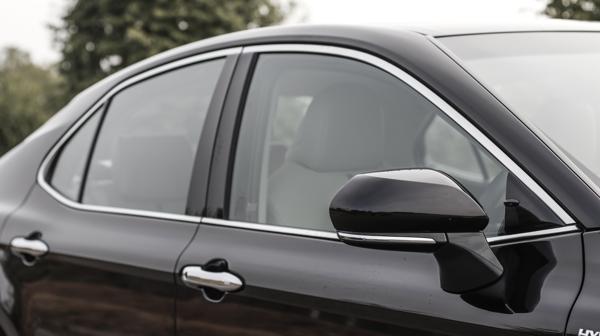 Just to throw in some facts - the new Camry measures 4,885mm in length, 1,840mm in width, and 1,455mm in height. This makes it both longer and wider than the diesel powered and similarly priced Volkswagen Passat. What's more, at 2,825mm, the Camry has a significantly longer wheelbase as well. 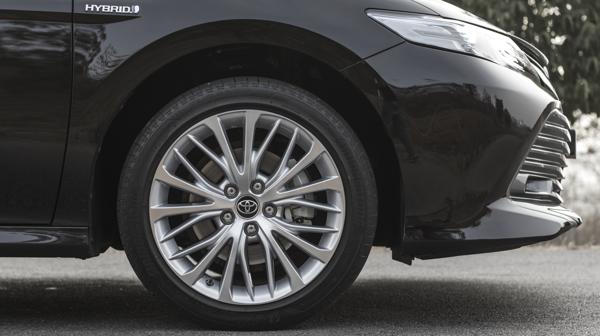 It comes as no surprise then that the new Camry is extremely spacious, particularly in the rear. There's enough and more kneeroom for even the tallest adults. And the shoulder room is handsome too; excessive for two and roomy enough for three. Also, with the battery stack now placed under the rear seat, Toyota claims the boot is both bigger and more usable. 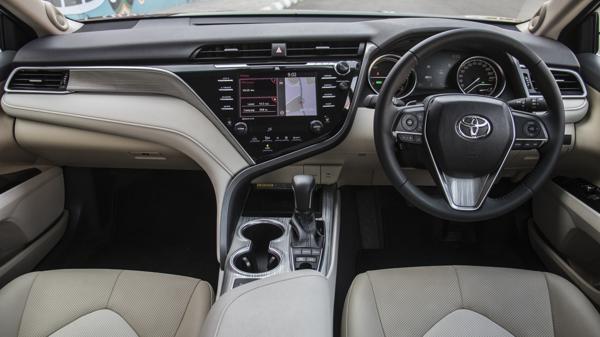 We, meanwhile, fell in love with the rear seats on the new Camry. To begin with, these are supremely comfortable. They are large, cushy and supportive and feel great to touch. And, they have electrical adjustment for the back rest.

Besides that, there's a dedicated climate control zone for the rear passengers. And the rear central armrest now gets capacitive touch operation for audio, seat-back adjustment, and climate control. Furthermore, the left rear passenger also has the option to adjust the front passenger's seat; the perfect feature for those being chauffeur-driven. 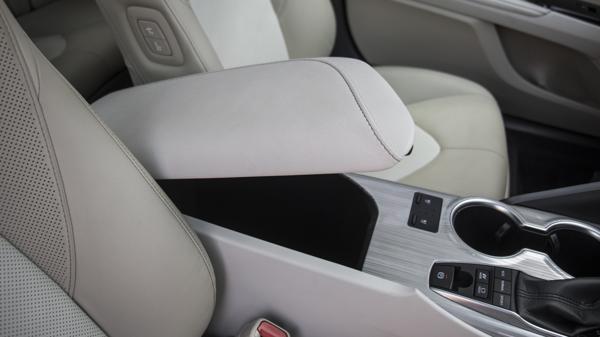 Upfront, the dash design is refreshing. There's a large touchscreen surrounded by aircon and shortcut buttons for the audio. And, the choice of colours and materials give the Camry's interior an air of opulence. 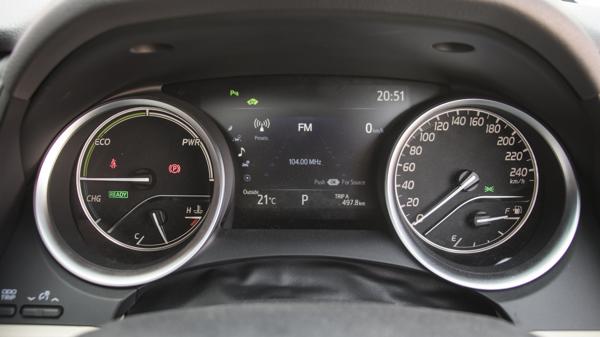 Additionally, the front seats, much like the ones at the back, are big, comfy, and rich to the touch. These are also electrically adjustable for reach, recline and height. And, they also have memory function, and are vented! 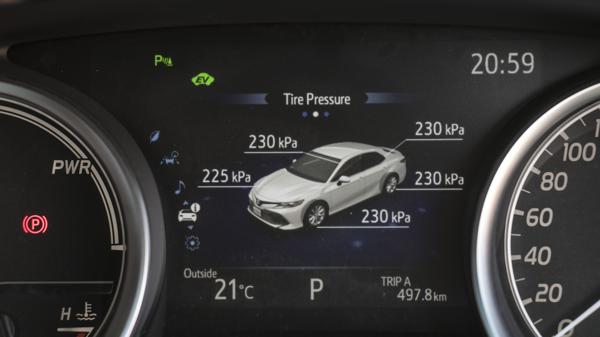 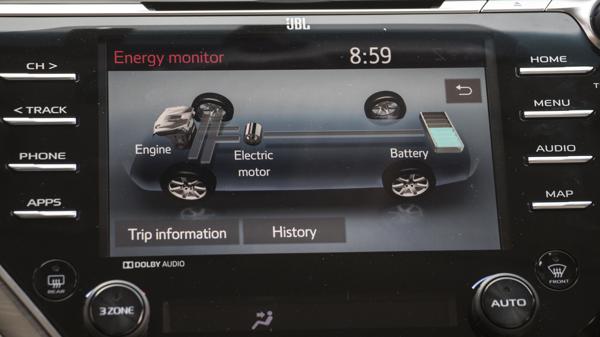 However, a closer examination brings up chinks in the Camry's interior. Now, these aren't those make-or-break type of flaws, but they do fall a little short of our expectations for the car. The power window switches, the matte black finish on the steering, the choice of fonts for both the touchscreen and the driver MID, leave a little to be desired. These lack that luxury and quality feel that Camry is selling.

The new Camry is powered by a four cylinder, 2.5-litre petrol engine. On its own, it develops a little under 180bhp and 221Nm of peak torque. But, this one is a parallel hybrid, which means there's electric power to help things along as well. 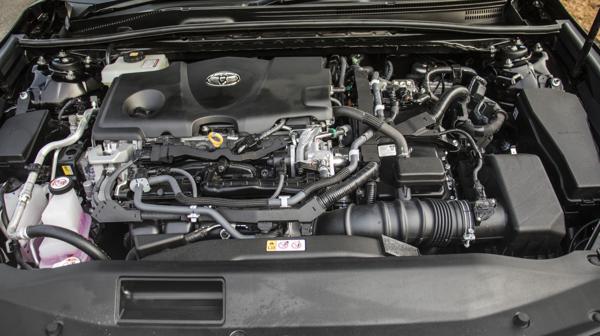 That electric help comes in the form of a permanent magnet motor with output figures reading 88kw (120bhp) and 202Nm. However, the engine and the electric motor never deliver their maximum at the same time. The combined power output, as a result, is more like 220bhp and not almost 300bhp as simple mathematics would have you believe.

The two powerhouses channel their outputs via a CVT which drives the front wheels. Now, on the new Camry, this CVT also offers paddleshifters, and there are three driving modes as well - Eco, Normal and Sport. 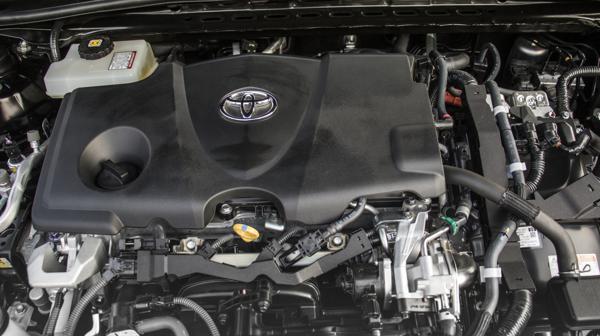 Normal is the default mode, while Eco nudges the drivetrain to use as much e-power as often as possible. In Sport, the throttle response becomes more immediate, the steering weighs up ever so slightly, and the manual mode and the paddle shifters finally feel relevant.

Having said that, the difference is anything but dramatic. In fact, nothing about the way the Camry drives screams sporty. It's more of a quiet, easy-going, mile-muncher. 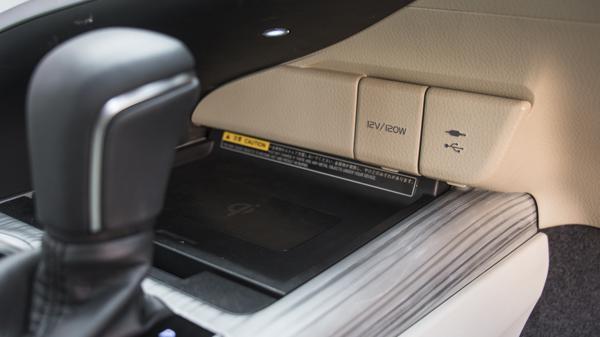 Don't hurry it along, and it's almost effortless to drive. It rides well over small undulations, tiny potholes, and road joints. It remains flat and poised. Add to it, the good visibility, courtesy the low dashboard, and the relatively thin pillar, and there's really very little that bothers you about the Camry.

But, it doesn't feel at its best when wrestled around or driven hard. At higher speeds, its rear begins to wallow, which is anything but comfortable. It also doesn't like being thrown around from corner to corner. Its length and soft suspension setup get in the way. And, even though it has a quick steering rack, there's hardly any feel at the wheel to talk about. 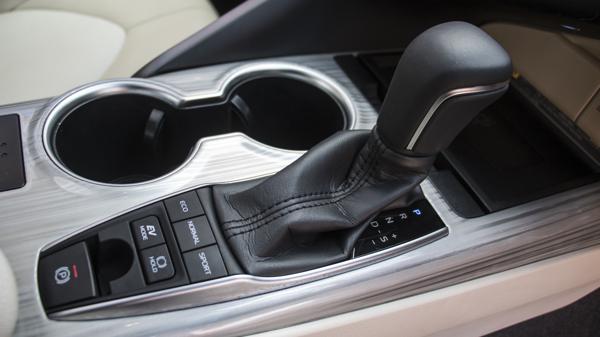 And, lest we forget, the engine, although rev-happy, does get loud when revved. And then there's the CVT’s innate ability to hold the revs constant near the redline when driven with a heavy foot. That and the loud engine isn't a great combo.

The Camry is one of its kind. It's the only luxury sedan under 40 lakhs to come with a hybrid drivetrain. Which, was true earlier as well, sure, but the previous model lacked desirability beyond the 'green tag. 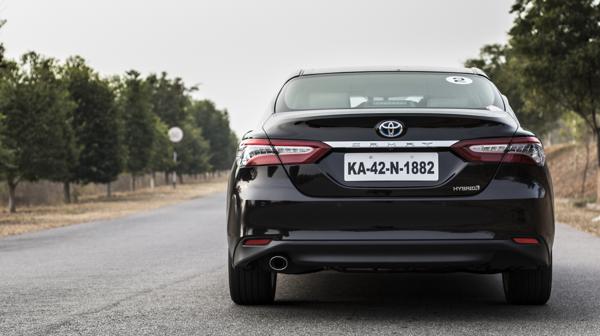 That changes with the new Camry. It's desirable to look at, it is well-appointed on the inside, and it is fantastic when it comes to rear seat comfort. It's also packed with features.

Yes, it's still not a car one would buy for driving pleasure. And, yes, it could do with better materials at places. But overall, it is a significant step-up from the car it replaces. And, one that is easier to recommend now. 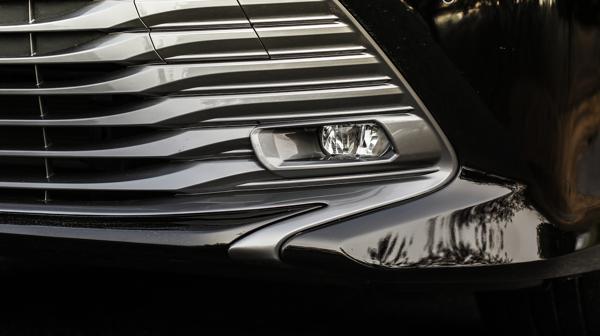 Note: Specifications for Camry Hybrid have been mentioned 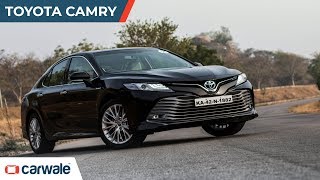 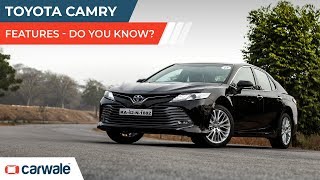 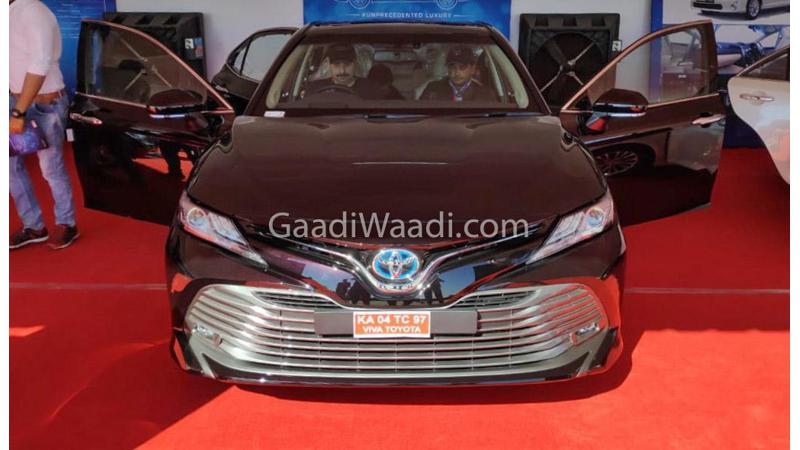 2019 Toyota Camry arrives at dealerships Ahead of its anticipated launch on 18 January, the new-gen Toyota Camry has been spotted at the dealership. This eighth-generation Camry is based on the

Toyota has launched the new-gen Camry in India for the price of Rs 36.95 lakhs (ex-showroom Delhi). The eight-generation Camry is now based on Toyota&rsquo;s global platform. The flagship sedan has