Continuing the trend of creating sedans out of hatchback designs, Hyundai Motor Brazil launched a sedan version of its popular premium hatchback i20 in the fast developing South American country. This vehicle is codenamed as HB20S and is also expected to be seen in the Indian auto market, as part of Hyundai's global strategy. The platform on HB20S will be shared with an upcoming crossover from the South Korean manufacturer, codenamed as HB20X. In addition, Hyundai Motor India has also revealed plans of launching a compact sedan slotted between i10 and i20, apart from a compact Sports Utility Vehicle (SUV) and a Multi Purpose Vehicle (MPV) in the country. 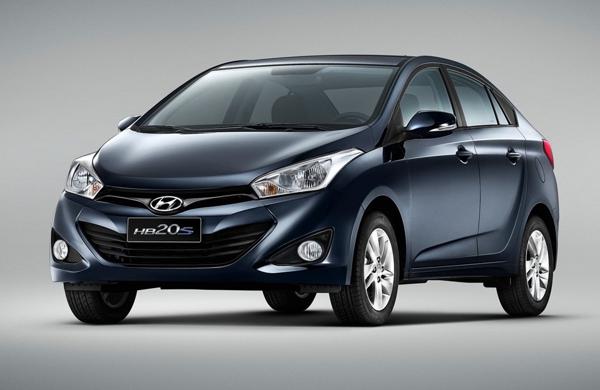 Hyundai HB20S has a length of 4200 mm, with a width of 1700 mm and a height of 1500 mm. It comes with a wheelbase of 2500 mm, which is the same as hatchback i20. However, the luggage carrying capacity of HB20S is 150 litres more than i20, at 450 litres. On the engine front, this vehicle gets a 1.0 litre petrol power-mill, designed to churn a maximum power output of 80 bhp, along with a diesel option that has a 1.6 litre, pumping out 128 bhp of power. Two transmission options will be available- a 5 speed manual and a 4 speed automatic gearbox. Automatic transmission will definitely be a boon to drive in the start-and-stop Indian traffic. However, the Indian spec i20-based entry level sedan could have slightly different u under-the-hood specifications than its Brazil version.

Upon its launch in Indian market, the new i20-based Hyundai HB20S entry level sedan would compete against the likes of Chevrolet Sail, Maruti Swift DZire, Tata Indigo CS, Toyota Etios and the Honda Amaze. Currently in the Brazilian market, it competes with Volkswagen Golf and Chevrolet Onix. Evidently, the new Hyundai vehicle has been very successful in propagating the company's fluidic design philosophy in the Brazil and the company would be expecting to see a replay of the same in India. The HB20S flaunts a curvaceous fluidic design language and it does appear as an interesting proposition for the domestic car market.

Similar to other auto manufacturers, Hyundai Motor India also had a lacklustre FY 2012-13 in terms of sales witnessed in the passenger car market. Industry experts believe that new models such as the i20-based HB20S entry level sedan could help the South Korean auto maker to compete better in the Indian automotive industry.

India to permit the import of 2.5 lakh vehicles from Europe at 10 per cent