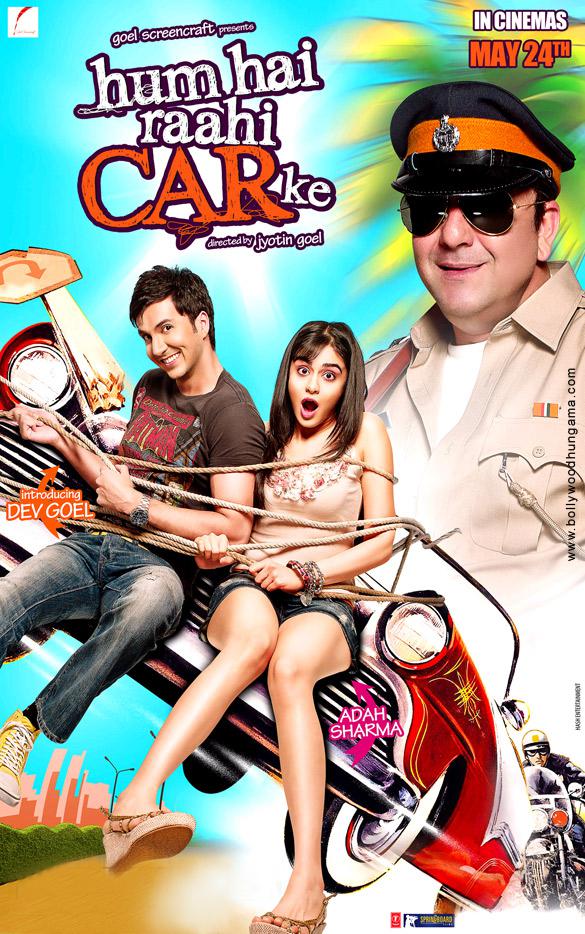 Adah Sharma, who debuted with the 2008 horror motion picture – ‘1920’, has been roped in to play the female lead in Hum Hai Raahi Car Ke. The 23 year old Bollywood actor will be seen romancing newcomer Dev Goel in the new popcorn flick, which will see a nationwide release on May 24, 2013. The supporting cast comprises Rati Agnihotri, Ganesh Venkatraman, Vivek Vaswani and Ranglani Ashish. The movie is produced and directed by Jyotin Goel and the music is given by Sangeet and Siddharth Haldipur.

The plot revolves around two best friends who embark on a Mumbai to Pune road trip on a New Year’s night. However, the planned trip goes awry with a number of obstacles and stupid situations coming in the way and preventing the two friends from reaching their destination. Somehow the two hour long trip gets converted into an all-nighter, with many interesting episodes happening along the way. Hum Hai Raahi Car Ke promises many comic sequences and develops humour on the basis of several whacky situations.

Adah Sharma plays a call centre executive in the film and on her new role said, “Call centre girls have a very particular way of talking and they convey a lot in those limited seconds available to them. Since I am playing one such executive, I am a part of many funny scenes where I get into this mode.” On her star studded movie cast, Adah was further quoted as saying, “We both are very lucky to work with established stars and to do comedy with them because one gets to learn a lot in comedy. Everyone's comic timing is different, Chunky (Pandey) ji, Juhiji (Juhi Chawla), and Sanjay Dutt's. We got to learn different things from everyone.”