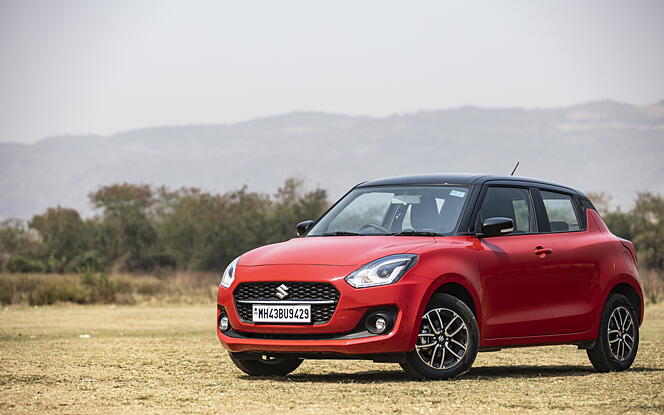 Ever since its introduction back in 2005, the Maruti Suzuki Swift has been a household name in the Indian car buying scene. With close to 23 lakh takers, the Swift was sold in huge numbers in the last one and a half decade – that’s an average of about 13,000 each month. So when a new one arrives, everyone sits up and takes notice. This is the MY2021 Maruti Suzuki Swift and with subtle design tweaks and added features on the inside, it also gets a new engine under the hood. What makes this new Swift stand out? Let’s find out.

As mentioned above, the changes to the design are subtle when you look at it. The closely-stacked horizontal louvres of the fish-mouth grille are now replaced by a mesh grille. Although the number plate position hasn’t been changed, there’s a chrome strip now running through the centre of the grille to add a bit of zing. Apart from that, there’s also a dual-tone paint scheme for three exterior colour options – red with a black roof, white with a black roof, and blue with a white roof.

So the new Swift remains a modern-looking hatchback with eccentric styling which is more quirky and likeable than dubious. There’re projector headlamps upfront with handsome looking LED day-time running lights combined with integrated circular fog lamps on the lower bumper. On the side, the hidden rear door handle still stands out and the pronounced shoulder arches lend the Swift a muscular stance. At the back, the well-designed LED taillamps and minimalistic design to the boot and bumper are easy on the eyes.

Similar to the exterior, the changes on the inside are minimal. Get inside and there’s a new instrument cluster welcoming you with its 4.2-inch coloured screen nestled between the dual-circular analogue dials. However, it doesn’t appear to be the same unit as the one you find in more expensive models like the Baleno or Ertiga, so there are a few displays/information that are missing. You do get a clock, fuel consumption graph, door ajar display, trip computer, and an idle-stop time meter. Oh yes, the last one is in the conjunction with the new auto-start-stop feature which has debuted in the Swift. Also new are the right-side controls on the steering wheel debuting cruise control. Neither of these features are available in the direct rival viz. Grand i10 Nios but can be had in the Altroz i-Turbo.

Otherwise, the cabin of the Swift has remained unchanged. You get an all-black interior with silver inserts on the dash and the flat-bottom steering wheel. The quality of materials on the inside is good and even the ergonomics are spot-on for a hatchback of this size. You get good visibility all around and over the bonnet, but the same cannot be said about the rear windscreen which is quite narrow and the C-pillar is quite thick obstructing quite a view – especially when parking.

As for the seats, they are large and comfortable with soft padding and extra support on the side. They could do with more shoulder support though. Otherwise, there’s no complaining even after spending long hours in. Even the seats at the back offer excellent under-thigh and back support. There’s ample legroom here with enough headroom even for taller passengers. With 268litres of boot size, it is deep and large enough to swallow a large suitcase with room to spare for a couple of backpacks or a duffle bag.

Maruti Suzuki could have taken this update as an opportunity to introduce other features like wireless charger, sunroof or even rear AC vents in the Swift. But they are still given a miss, which is a bit of a bummer.

The most important change in the new Swift is the engine. All the traits of the 1.2-litre four-cylinder naturally-aspirated petrol engine are the same. But this is a K12 Dual Jet Dual VVT motor – one that also does duties in the Dzire. As a result, power is up by 7bhp to 89bhp while the max torque of 113Nm remains the same. The Dual VVT in the engine nomenclature stands for ‘variable valve timing for both intake and exhaust valve’. With an improved EGR (exhaust gas recirculation) system and idle-start-stop function, the new motor is not only more powerful but also more efficient, claims Maruti. The manual version we have here has a claimed ARAI fuel efficiency of 23.20kmpl, while the AMT version is good for 23.76kmpl.

With the bump in power, the new Swift posted a slightly quicker 0-100kmph time of 11.75 seconds compared to 12.26 seconds of the old car. In terms of roll-on acceleration, it did 20-80kmph in third in 14.35 seconds and 40-100kmph in fourth in 16.90 seconds. At idle, the four-cylinder engine is refined and completely vibe-free to a point that you’ll have to double-check whether the engine is on. Get on the move and the refinement continues with good grunt both in the low and mid-range. Since there’s no turbo, there’s no lag of any sort and the power delivery is linear. The motor revs freely to redline, it might get noisy past 4,000rpm, but the corresponding noise isn’t accompanied by any unpleasant vibration. The motor feels the best between 1,500-2,500rpm and you can potter around in a gear too high at city speeds without the motor stuttering and urging you to downshift. This K12 unit is peppy and responsive even from low engine speeds. Even highway speeds come up quickly and easily if you hold a gear a bit longer and overtaking at triple-digit is no hassle either.

It’s a refined engine through and through, and you can experience it while downshifting or engine braking where it neatly dials down without making any fuss. Moreover, the new idle-start-stop function works brilliantly. Pull up to a traffic signal, slot in neutral and get on the brakes, and it kills the engine immediately. To pull away, just depress the clutch and the engine is back to life in no time. It works flawlessly every single time. Like before, the clutch is light and complements the five-speed manual gearbox we have here. The short and precise throw of the gear lever makes it extremely fun to drive. We love how smooth and crisp it is when rowing through the gears and it’s enjoyable rather than a task to drive this manual.

Going almost three and a half turns lock-to-lock, the new Swift’s steering is light and slightly vague off-centre. It’s not slow to respond though and has a direct feel once you start pushing it. Show it some corners and the well-balanced chassis and controlled body roll are good enough to induce a wide grin each time. In terms of ride, the new Swift has a good composure at slow speeds going over bad surface. Only the sharpest potholes are felt on the inside. Otherwise, everything else is taken astride with good poise. And it only gets better as speed increases. Another good thing about it is that the ride remains consistent so you can predict the speed you’d like to take on a bad patch or speed breaker beforehand. It’s a light car – thanks to the new Heartect platform – and it is felt as the high-speed stability isn’t something to write home about.

Launched at Rs 5.73 lakh (ex-showroom), the 2021 Maruti Suzuki Swift in this top-spec ZXI Plus Dual Tone trim can be yours for Rs 7.91 Lakh (ex-showroom). The equivalent AMT version is around Rs 50,000 dearer. With the update, the new Swift is slightly more expensive than the older version, which, given the newer features and updates, is a justifiable asking. What it could have improved upon are more features especially when rivals like the Hyundai Grand i10 Nios and some versions of the Tata Altroz offer better value in some way or the other. You could now also look at some sub-four metre SUVs like the Nissan Magnite and Renault Triber at a similar price point. But the Swift has been a high-seller in the Indian car market for a reason. And it continues its tradition with this update now together with a newer fascia, added features on the inside, and a newer heart.

Is Swift a Good Car?

Based on 493 User Ratings

Swift has received a very favourable 89% approval rating based on 493 user reviews.

Users prefer to buy Swift for Performance (90% rating) and Styling (89% rating). The least appreciated parameters are Comfort (86%) and Value for Money (87%).

How Swift fares against competition?

Find a list of all 9 petrol versions of Maruti Suzuki Swift. This table includes on-road price which covers all costs like RTO and Insurance.

Maruti Suzuki has launched the Swift facelift after the new generation was launched in India way back in the year 2018. The facelift gets a brand new engine and a handful of exterior and interior changes to give it a fresh look. It also gets costlier by Rs 15,000 to Rs 20,000 over the previous model with an inclusion of a new ZXi+ dual tone trim.

On the inside, the cabin is highlighted with silver ornamentation and a twin-pod instrument cluster with a coloured 4.2-inch TFT display. The new Swift is now benefitted by a cruise control, idle start-stop function, and key synchronised auto-foldable ORVMs. It continues to be offered with a host of safety features such as dual airbags, ABS with EBD, reverse parking camera, driver and co-driver seat belt reminder, and ISOFIX anchorage points.

Visually, the 2021 Swift features a new chrome stripe on the single-piece front grille which now has a mesh-pattern. Other highlights include a dual-tone exterior shade which can be had with the top ZXi+ trim. The three dual-tone options include – Pearl Arctic White and Solid Fire Red with Pearl Midnight Black roof and Midnight Blue with Arctic White roof.  The projector headlights, LED DRLs, 15-inch precision-cut alloy wheels, floating roof effect are to be carried over from the current model.

The talking point of the Swift is a brand new engine in the form of a K12 series Dual Jet Dual VVT engine with idle start-stop function. Simply put, the same 1.2-litre engine will now return a higher fuel efficiency of 23.20-kmpl in manual transmission and 23.76-kmpl when paired with the AMT gearbox. The power figures have also bumped by 7bhp to 89bhp and 113Nm of torque.

Note: Specifications for Swift LXi have been mentioned The Swift Sport gets a 1.4-litre turbocharged engine. Maruti Suzuki has revealed that the company will increase prices across its entire product portfolio with effect from September 2021.

Maruti Suzuki exports Made-in-India vehicles to over 100 countries around the globe.