Hyundai India Motors Limited is ready to launch one of its most successful SUV models, Santa Fe, in India. The car is expected to hit the Indian roads by March 2009 but the expected price of the model for India still remains unknown. However, the estimated price of the model is around Rs. 23-26 lakh. Santa Fe is one of the most successful SUVs in North America and the company intends to bring its petrol as well as diesel model in India.

HMIL is the wholly owned Indian subsidiary of Hyundai Motor Company of South Korea. It is the second largest car manufacturer and the largest car exporter in India. It has made India as its exports hub for its small cars. It has its plants located in Chennai and Sriperumbudur, near Chennai. It currently markets 37 variants of passengers car pan India. 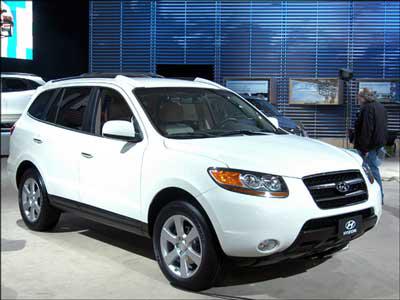 HMIL launched Hyundai i20 in December 2008 which has been a very successful model in the premium hatchback segment. It also launched Hyundai Sonata Transform in India last month to strengthen its market presence in the luxury car segment. Hyundai Director HS Lheem expects to sell more than a thousand units in India annually. With a new SUV in the premium segment, Hyundai certainly looks all geared up to capture the luxury car market in India.