After an extensive Ford EcoSport Urban Discoveries campaign organised over social media platforms which started back in March 2012, the finalists have been announced. Entries for the most unique urban places of discovery were invited from 12 cities in the country. Participants were shortlisted on the basis of gathered votes and the quality of discoveries. For the final round here shortlisted participants were accompanied by two friends to take part in a video audition, which was then judged by a jury. Names of the finalists have been put up on the website http://ecosportdiscoveries.co.in/2013/05/14/and-the-finalists-are/ 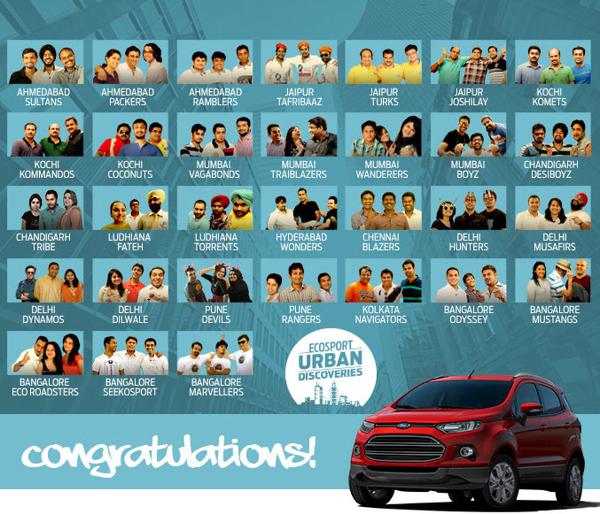 More than 8000 entries had been received during this campaign. In fact, it was one of the largest online and print media marketing campaigns to have been ever organised. 35 teams were originally invited to take part in the second phase of this contest, but unfortunately 4 teams were unable to make themselves due to unavailability of one or more team members. Each of these 31 finalist teams would now get a chance to own and drive a Ford EcoSport for the next 21 days, in which they would continue to discover more unique urban places. This time, a TV crew would also be accompanying each of the teams, to help them shoot small videos of the newly discovered places.

At the end of this contest, each participant would be submitting a video of his or her discovered place. Each team would then get to keep these EcoSport vehicles till June 4. In addition, Ford India is also giving followers of their website a chance to soak in the excitement by giving chances to win tablets or the EcoSport itself. RJ Mantra is continuously giving updates and blogging on the Ford website, for engaging the audiences.

The Ford EcoSport is a revolutionary new compact Sports Utility Vehicle (SUV), to be launched by the company in India during June this year. The vehicle looks just as attractive from outside, as it does from the insides. It would be available in three engine options, two of which would be petrol an one would be diesel.