BMW 5 Series entered into its seventh generation in India today with the introduction of the G30 5 Series at Rs 49.90 lakhs (ex-showroom Delhi). The new 5 Series is bigger, better and more advanced than the outgoing car. It continues its fray in the executive sedan segment against the likes of Mercedes-Benz E-Class, Audi A6, Jaguar XF, Volvo S90, and the new Lexus ES. Here is a competition check to see how the new 5 compares against its adversaries. 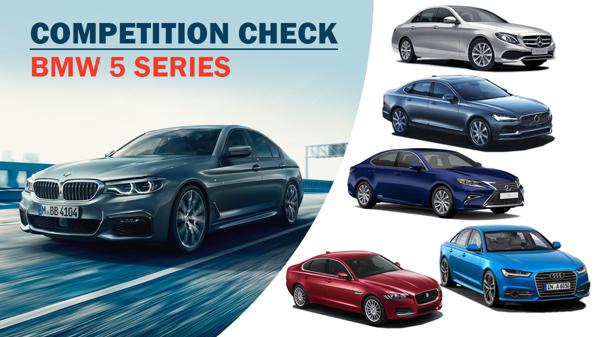 Mercedes-Benz tried to work around the rule book by introducing the new E-Class in India in only the long wheelbase guise. The E-Class now looks like a baby S-Class. Similarly, the 5 Series also seems like a scaled-down version of the 7 Series. Interestingly, the new 5 Series is bigger than the outgoing car and measures 4.9-metres in length and has a wheelbase of 2.97 metres, thus keeping it quite close to the E-Class LWB which measures 5.06 metres in length with a wheelbase of 3.07 metres. The LWB saloon gets three engine variants – one petrol and two diesels, although the top-spec diesel E350d is a whole Rs 10 lakhs more expensive than the top-spec 530d M Sport.

The current gen A6 has been around for some time now and is due for an update internationally. The A6 is available with one petrol and one diesel engine option only. Dimensionally, the new 5 series measures the same as the A6, but has a more powerful petrol motor. The diesel output, meanwhile, is the same in both these German saloons. Being a mid-size luxury sedan, both the 5 Series and the A6 comes with all the bells and whistles expected at this price range. Standard equipment in the A6 includes adaptive air suspension, Bose surround system, eight airbags, Audi Drive Select, four-zone climate control and lots more. The Beemer outweighs the Ingolstadt sedan with features like automated parking, gesture control and heads up display, all as standard.

The British brute here is the XF with its sleek and cheeky styling, in contrast to the plane Jane appearance of the BMW. The XF is now locally assembled, thus making the price competitive to its German rivals. With one diesel and one petrol engine on offer, the XF is a good alternative to the German trio. Tipping the 5.06 metre mark in length, the XF is as big as the LWB E-Class, but a wheelbase of 2.96 metre is enough to stretch your legs as much as you can when seated in the rear of the new 5 Series. Also, the XF and the 5 Series are both driver’s cars in this segment.

The Volvo S90 has shaken things up in the executive sedan segment with its striking new design and the stately lines. The Scandinavian packs an amazing package in the only trim on sale in the country with one engine and all the equipment as standard. The 2.0-litre diesel motor in the S90 produces 190bhp which is same as the power output of the 520d. The Volvo features all the safety equipment that can be had in this segment and some more. The automatic parking, large infotainment screen, four-zone climate control and heads-up display are some of the standard features in both these executive sedans.

Lexus opened their Indian innings with its luxury executive sedan, the ES. The ES sedan is the new comer in this well established segment. The ES packs a hybrid powertrain in the single trim which takes the CBU route in India. The Lexus has a luxurious and well-pampered cabin and throws some crazy fuel economy numbers owing to its unconventional powertrain. Priced at Rs 55.27 lakh (ex-Delhi) the ES is a good alternative if you want your executive sedan to stand-out amongst the normal crop of cars on the road. The 5, on the other hand, continues to be the ultimate driving machine and is a force to reckon with. Maserati GranTurismo and GranCabrio updated for 2018