Jaguar has now started building the all-new XF in India after it was introduced in the Indian market as a CBU. As a result of the localisation, the prices have gone down by almost Rs 2 lakh with the new XF starting at Rs 47.5 lakh, ex-showroom Delhi. This spices up things in the executive luxury sedan segment that is currently ruled by the three German – Mercedes E-Class, BMW 5 Series and the Audi A6. The all-new Volvo S90 has already made a mark for itself in the segment and here is how the entry-level Jag fares against its peers in the segment. 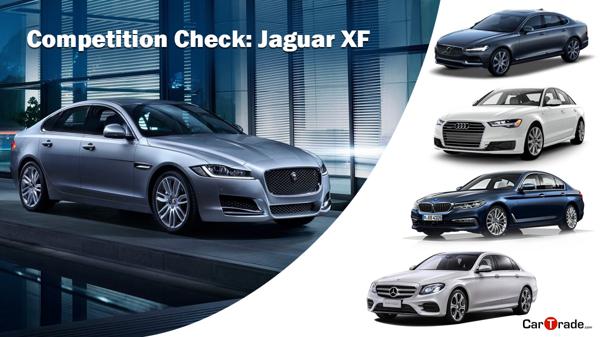 The new Mercedes E-Class now comes in only the long wheelbase form and has left its German competitors look outdated in their proposition. But then, the Jaguar with its 5067mm overall length is longer than the long wheelbase Mercedes by a whisker (4mm). But then, the Mercedes’ wheelbase is longer than the Jaguar and hence the cabin space is the best in the class. The entry-level trim for the new E will get a petrol engine – the 2.0-litre 184bhp turbocharged mill which means the Jaguar, with its diesel engine will be lighter on the pocket. It would certainly be much lighter even when you are out to buy one as the Mercedes will start off between Rs 55 lakh to 60 lakh, about 10 lakh more than the Jaguar.

The Volvo S90 has shaken things up in the executive sedan segment with its striking new design and the stately lines. The Jaguar has been there in the fray for the past ten years and had brought a sporty flavour to the game with the leaping cat. The new Jaguar XF is a good Rs 6 lakh cheaper than the S90 and is a 100mm longer. But with the larger hood of the Jag, the cabin space in the S90 scores more. Both have similar 2.0-litre diesel engines to start with similar performance. The Jaguar is obviously focussed on handling while the S90 is all about comfort. And then the S90 is a fully loaded car that sells only one trim while the Jaguar is an entry-level trim.

The BMW 5 Series is also due for an update as the all-new 5 Series car has already debuted in international markets. But as of now, the 5 Series feels a bit dated when compared to the competition. Especially with the new styling and equipment being offered in the new Jaguar XF. Also, the XF and the 5 Series are both driver’s cars, the XF excels at that as well despite it running a diesel and the BMW running a petrol mill at the entry-level. And then the BMW is almost Rs 7 lakh more than the Jaguar.

The Audi A6 is Rs 5 lakh more than the XF and does get a few things going for it. Like the Matrix LED headlamps and a comfortable driving setup. But it feels old despite being a new car, especially because of the signature looks. It does not have the persona of the Jaguar and the performance also lacks the earnestness of the Jag.

Ferrari may be working on a LaFerrari-based concept