BMW has officially revealed the new-gen X5. Codenamed G05, the new X5 is bigger, more feature loaded and slightly stylish than before.
Based on the new CLAR platform, the X5 has grown in dimensions. It’s length has increased by 36mm to 4,922mm, width by 66mm to 2,004 mm and height by 19mm to 1,745mm. The wheel base is extended by 42mm to 2,975mm. Appearance wise, the Kidney grille is now larger than before lending an imposing character to the SUV. The LED headlamps are newly designed and has the BMW Laser light with adaptive LED signature in the blue X-motif. The front bumper gets large air vents surrounded by black inserts. 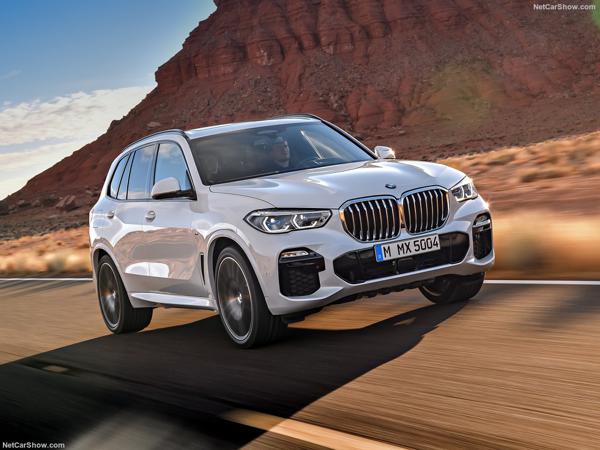 The taillights are sleek and have a 3D lighting signature. The silhouette is instantly recognisable while the X5 sits on massive 21-inch wheels for the first time. The rear diffuser with integrated exhaust tips lend a sporty appeal to the SUV.
The cabin is typical BMW with floating infotainment screen, horizontal centre console and now a fully-digital instrument cluster. Called the BMW Live Cockpit Professional display, the digital cluster makes its debut in the X5 and it comes as standard fitment. The iDrive is also updated and now supports customisable display, touchscreen panel and gesture/voice commands.

Engine wise, the new-gen X5 will have four powertrain options. The top-spec xDrive50i will be powered by a newly-developed V8 producing 460bhp. A 340bhp 3.0-litre straight-six petrol engine will be powering the xDrive40i. There are two diesel engines - 400bhp in the M50d and a 265bhp unit in xDrive30d. The eight-speed Steptronic transmission is fitted as standard.

The fourth-gen X5 will hit the market in November. Following that, BMW will promptly bring the new X5 in India probably early next year. It will continue to rival the likes of Mercedes-Benz GLE, Audi Q7, Volvo XC90 besides Range Rover Velar and Porsche Cayenne.