The electric version of the Nexon, called the Nexon EV, was introduced in the country in January 2020. The electric compact SUV is available in three variants – XM, XZ+, and the XZ+ LUX. Interested customers get to choose from three colour options - Signature Teal Blue, Glacier White, and Moonlit Silver. Tata Motors offers a standard warranty of three-years/1.25-lakh kilometres and a battery and motor warranty for eight-years/1.6-lakh kilometres for the Nexon EV.

The Nexon EV is based on the Impact Design 2.0 language. The fascia is highlighted by the sporty grille in the lower section of the bumper with signature tri-arrow elements, while the signature Humanity Line between the headlamps is hard to miss. The higher variant offers a sunroof along with rain-sensing wipers in the front. To distinguish it from the regular version, it also gets a new set of alloy wheels.

The Nexon EV gets Altroz-sourced flat-bottom steering wheel and a modest instrument cluster which gives out information like charge level, driving range, battery consumption, turn-by-turn navigation, and more. The feature list further includes a seven-inch touchscreen infotainment system and automatic climate control. The Nexon EV is the safest Made-in-India electric SUV with a five-star safety rating at GNCAP crash tests. In terms of safety equipment, it comes with dual airbags, ABS along with EBD, and cornering stability control as standard.

The Nexon EV is powered by a three-phase permanent magnet synchronous motor paired to a 30.2kWh lithium-ion and a liquid-cooled battery pack to generate 127bhp and 245Nm. The ARAI-certified range of the Nexon EV is 312km and it comes with IP67 certification. Charging options include a 3.3kW bundled charger that can charge the battery pack from 20-100 per cent in eight hours, while a 25kW fast charger can charge the battery from 0-80 per cent in 60 minutes.

Find a list of all 5 electric versions of Tata Nexon EV. This table includes on-road price which covers all costs like RTO and Insurance. Fossil fuels in one form or another have been the backbone of the automotive industry for well over a century now. Coal, kerosene, diesel and petrol have all shaped the way we travel. Well, now the next step is here in the< 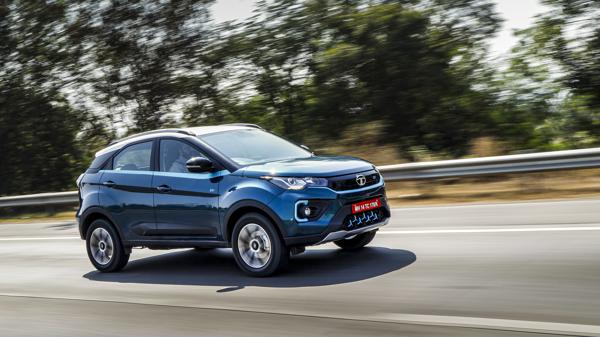 Fossil fuels in one form or another have been the backbone of the automotive industry for well over a century now. Coal, kerosene, diesel and petrol have all shaped the way we travel. Well, now the next step is here in the form of battery-powered electric vehicles.
More specifically, they power what you see in the pictures - the Tata Nexon EV. It’s the Indian automaker’s most major and ambitious effort at an electric vehicle and we have had the opportunity to drive it and now we’ll tell you if Tata Motors has put its best foot forward in the doorway to future mobility. 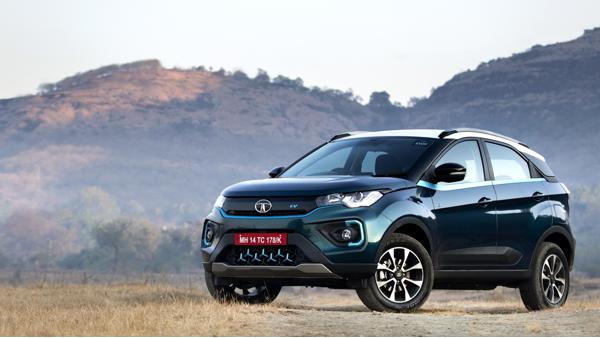 The exterior design of the Tata Nexon EV is similar to that of the regular Nexon but with a few EV touches that help it stand out. Highlights of the exterior design include new swept-back headlamps with LED DRLs, blue chrome accents on the front and rear bumpers as well as the shoulder line. Also part of the package is a blacked-out single slat grille and tri-arrow inserts for the air dam. 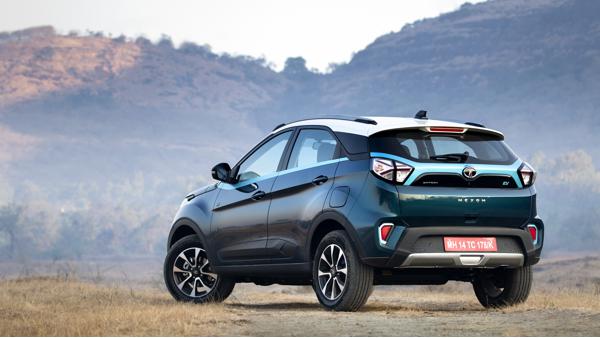 The Nexon in itself is a very funky looking car thanks to its angular lines and larger than life proportions. This electric version, although a bit understated for what it is, manages to integrate itself quite well into the Nexon family. 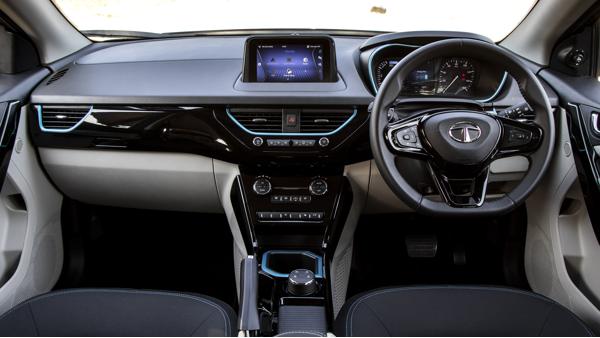 Like the exterior, the cabin of the Nexon EV is identical to its fossil fuel powered sibling but with a host of updates that keep it in line with its electric powered nature. The cabin is a white and grey affair with these blue inserts in various places to reinforce the underlying electric nature of what you are driving. The most noticeable absence is a gear lever whose job has been taken over by a selector dial which is clearly marked but it freewheels and can be confusing to use at times. 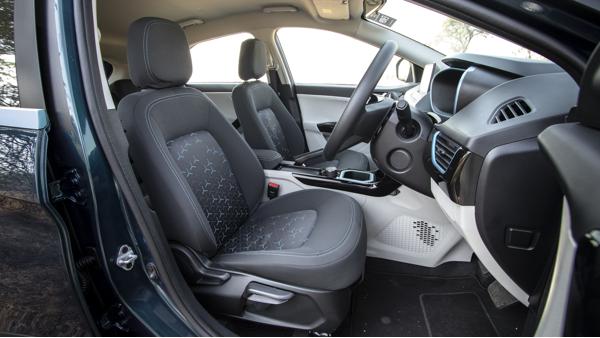 The Nexon EV’s ergonomics are exactly the same as the regular Nexon and that’s a very good thing because familiarity in terms of touch and feel will play a huge role in normalizing and mainstreaming EV ownership. Everything falls easily to hand but the only thing that is a bit discerning at first is that when you press the start/stop button, there is no sound of any kind and your only clue that the car is on is the lighting up of the instrument cluster. 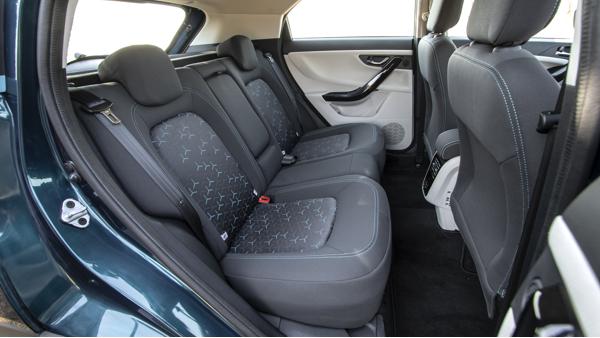 This top spec XZ+ Lux variant that we are driving gets all the usual niceties like climate control, height adjustment for the driver’s seat, cooled glove box and an infotainment system with a seven-inch floating touchscreen display. This is a comprehensive system with Apple CarPlay, Android Auto and over 35 connected car features like Geo fencing, remote AC control and an SOS alert. However, this is an EV and so you get some dedicated features like remote monitoring of the current charge levels, charging history, available range, nearest charging stations and more. 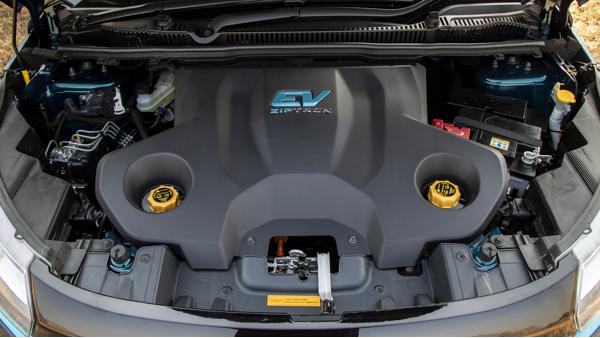 The Tata Nexon EV is underpinned by Tata’s new Ziptron technology. Its electric motor produces 127bhp/245Nm of torque and is powered by a 30.2 kWh lithium ion liquid cooled battery pack. There’s a single speed gearbox powering the front wheels. Performance figures are quite good as you get a 0-100kmph time of 9.9 seconds and an ARAI certified range of 312km. The battery pack is certified for IP67 standards in terms of safety and protection. 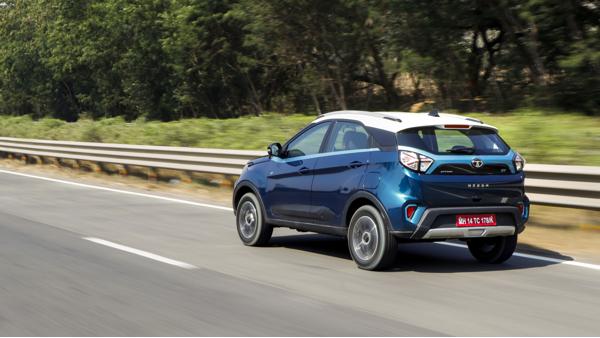 This being an EV, you get all the torque right from the stand still and this is particularly useful when you need to make quick overtakes. It can also get quite addictive as it takes nothing than a step on the throttle. Also included are two driving modes – the drive mode which is a regular one and the sport mode where throttle response is much sharper and the regenerative braking is much more intense. 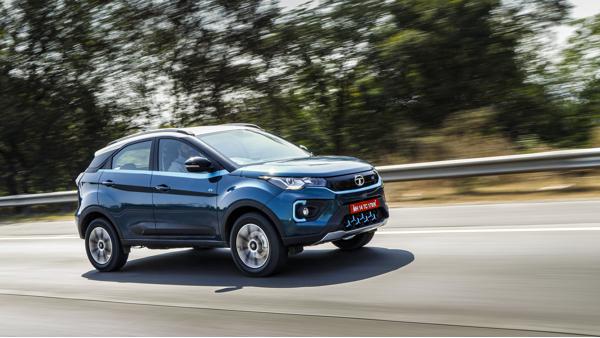 This car weighs 120kgs more than its standard sibling and has a ride that is on the firmer side when compared to the standard car. Also, it's quite compliant due to which most bumps and imperfections are done and dusted without too much effort. The steering weighs up nicely as you go faster and gliding from the point will reward you with a good driving experience. However, if you push the car into a corner heavily, it will under steer due to so much torque going through the front wheels all at once. In fact, the instant torque delivery is easily capable of spinning up the front wheels if you are suddenly in the mood to spring for a new set of tyres. 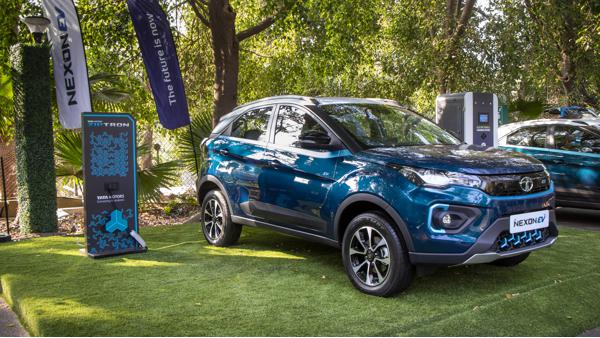 The 3.3kW AC charger when plugged into a 15A plug point will take eight hours to be fully charged. However, if you plug the car into a fast charger you can go from 0 per cent to 80 per cent in just 60 minutes. Tata in its initial roll out will install fast chargers at its major dealerships across 22 cities. 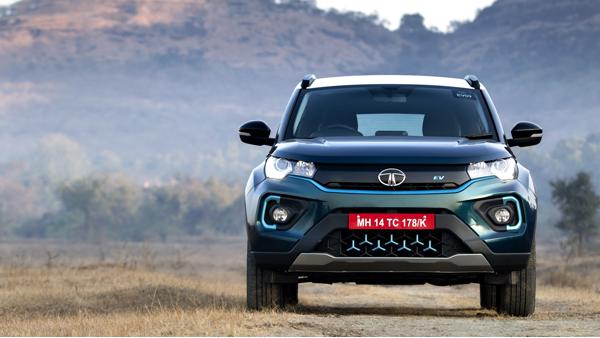 The Tata Nexon EV when launched will be offered in three variants- XM, XZ+ and the car we have here which is the XZ+ Lux. You get three colour options and one only one power train specification. It will be initially retailed in 22 major cities across India whereas an extensive sale across the country will commence at a later date. You can find all the details of the Tata Nexon EV on our website by clicking on this link.
Tata's first attempt at a full-fledged EV seems promising. There are loads of features, it's quite funky looking and the instant availability of torque right from the get go is a boon on the highway when you need to make quick overtakes. However, considering the present state of the charging grid in India, this is for someone who wants to be in with the times while using this EV as a second car. 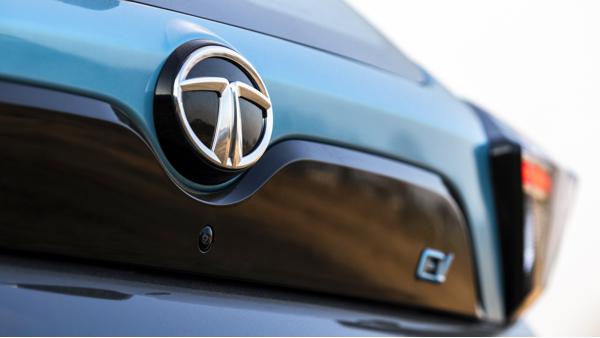 Tata is expected to price the Nexon EV in the range of Rs 15 lakhs to Rs 17 lakhs. While this will put it well out of the range of cars the regular Nexon competes with, it will be a unique offering in the segment dominated by cars like the Hyundai Creta, Kia Seltos and Nissan Kicks as well cars like the MG Hector, Mahindra XUV500 and the Tata Harrier.

The on-road price of the Tata Nexon EV in Delhi starts at ₹ 14.24 Lakh for the electric engine. Meanwhile, the top end model (Nexon EV XZ Plus LUX Dark Edition) with electric engine is priced at ₹ 16.85 Lakh.

Tata Nexon EV is a 5 seater car with 5 doors.

Tata offers battery warranty for first 160000 km with all offered 5 versions. However, warranty expires after 8 years even if km is not achieved.

Considering ₹5/unit to be the electricity cost, it generally cost around ₹1 to ₹1.5 per km to drive an electric car.

Note: Specifications for Nexon EV XM have been mentioned 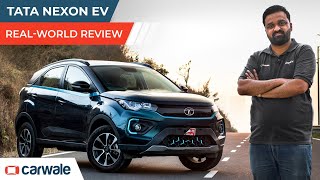 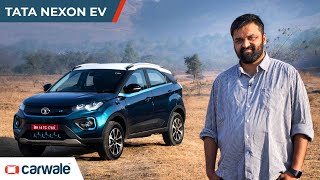 Tata Motors has presented the Nexon EV to the Municipal Corporation of Greater Mumbai or MCGM as part of the company’s tender agreement with EESL. Tata Motors is believed to be working on an update for the Nexon EV's powertrain. We expect the updated model to be introduced in India soon.

Tata Motors hikes prices of Nexon EV up to Rs 9,000

Prices for select variants of the Tata Nexon EV have been increased. The model is expected to receive a bump in the power output soon.