Several versions of the Volkswagen Up! were seen testing in and around Pune during 2012. This included both 2-door and 4-door versions of the car. Though Volkswagen is tight lipped about a possible launch of this hatchback, industry experts believe that the model would be launched sometime soon in 2016. 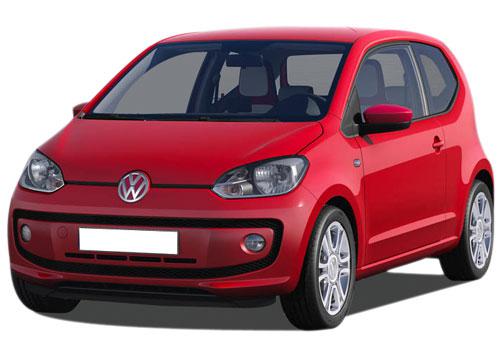 It is a tentative fact that the Volkswagen Up! would be priced between Rs. 3.5 lakhs to Rs. 4.5 lakhs and is to be slotted just below the Polo. With the launch of this new model, Volkswagen plans to tap the potential of the fast growing hatchback segment. As and when this car is launched, it is expected to create a stir in the market, going by the level of finish seen on the current Polo.

As per the sightings, the production version of Up! has a simple 2-box design. It has a distinctive large front bumper with a low-set rectangular grille. Together with angular headlights, the car looks appealing from the front. Vertical tail lights seem to go well with the overall design of the car. The company claims that the model will come with class-leading interior space. 251 litres of luggage space would be available, which could further extend up to 951 litres by folding the rear seats. Industry experts believe that the car would be powered by a 1.2 litre engine, which would have decent output.

For doing well in the Indian market, the Up! has to meet the Indian customers’ expectations with regards to fuel efficiency and value-for-money. Interestingly, these two factors are the major reasons for the success of India's top passenger car manufacturer, Maruti Suzuki India Limited (MSIL). In addition, the German giant is also planning to build Sports Utility Vehicles (SUVs) based on the Polo and the Up!. All the vehicles are expected to mark their presence in the Indian auto market by the end of 2016.

India is one of the very few markets in the world wherein the demand for SUVs is going up. The plan to build new SUVs is on the back of success achieved by other compact SUVs such as Renault Duster. The eagerly awaited Ford EcoSport is also expected to be launched in 2013. Together with the Up! and Polo, Volkswagen should have a formidable line-up of models for the Indian customers by 2016.