Pune, April 27, 2009 – Volkswagen India today starts the pre-series production of its most anticipated mid-segment model, the new Polo at its Pune plant. The new Minister for Economics, Labour and Transportation of the German Federal State of Lower Saxony, Dr. Philipp Rösler, visited the plant at Chakan to officially give the go ahead for the first welded body of the car. 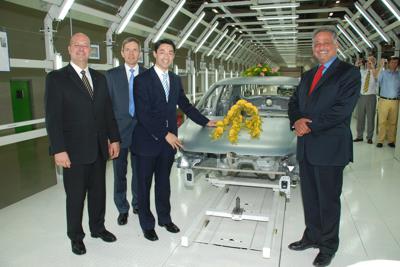 In the presence of Minister Dr. Rösler who is also Member of the Supervisory Board of Volkswagen Aktiengesellschaft, and the German Consular, Walter Stechel, the first finished body of the Polo on the way to the paint shop was given its first sanction. This production is a pre-run to the official production of the Polo that will begin at the plant by the end of this year.

“The Volkswagen Group is one of the world’s largest car manufacturer providing wealth and employment for many. As such, it is a great pleasure for me to see the expansion plans and the long term perception of the Group with its headquarters in Wolfsburg in my home state Lower Saxony. The Volkswagen plant here in Pune is a true example of German excellence meeting Indian spirit and I would like to congratulate the management on the commendable initiative”, Minister Dr. Rösler stated.

Jörg Müller, President and Managing Director of Volkswagen Group India, said: “We are so proud and delighted with the plant been inaugurated a year ahead of its schedule. This event today marks the next successful step on the entire effort of the team. With the first body of the Polo taking shape today, we are well on our way to fulfilling our commitment.”

For Volkswagen the recent inauguration of the Pune plant on 31st March ’09 was a major stepping stone towards achieving its ambitious growth targets on the Indian subcontinent. The Pune plant will begin building the Skoda Fabia compact car in May 2009. Production of a hatchback version of the Volkswagen Polo specially developed for the Indian market will be added from 2010. With a total financial commitment in India amounting to 580 million euros (3,800 crore INR), the Pune plant represents the largest investment to date by a German company in the country. The facility has a maximum annual production capacity of 110,000 vehicles destined for delivery to the Indian market.

The Pune plant is one of the most modern in the Volkswagen Group. It has a high level of vertical integration and a large share of local suppliers. The facility is the only production plant operated by a German automaker in India that covers the entire production process from press shop through body shop and paint shop to final assembly.

Volkswagen plans to employ some 2,500 people at the Pune plant by the end of 2010. The investment agreement to build the new plant was signed in November 2006.

Nano Mania Still Not Over

Its Time for Hummer to Die Now, Says General Motors