Piaggio, said to be a specialist in the two-wheeler segment in Italy, has plans to road its smartly designed Vespa 946 in the Indian auto market. The company calls its 946 model a premium and upmarket automatic scooter, which will offer its owners a powerful style statement. This futuristic yet retro looking two-wheeler was first revealed at the 2012 EICMA show with rage reviews from every quarter before Piaggio started its assembly line production. The 946 scooter is unique as even the minute detailing like the stitching of the seat and leather palm grips are all done by hand, so is the final round of polishing. The 946 looks sleek and comes with a handlebar mounted headlight enclosed within the bodywork. The 946 front apron has a small chromed grill with appealing turn indicators on either side. 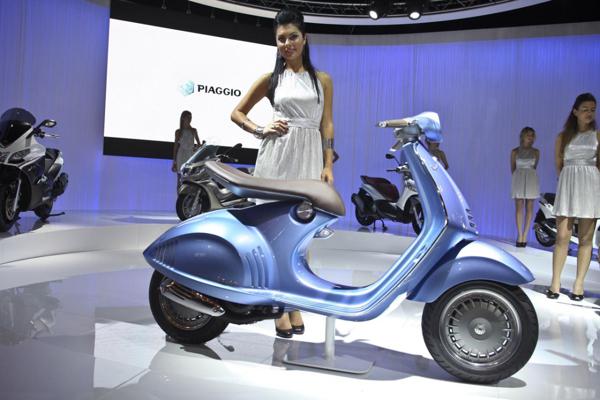 The handlebar seems classy but at the same time offers a futuristic feel, enclosing the scooter's switchgear and rear view mirrors. For meters and instruments the 946 uses a light blue backlit digital display. The seat is a traditional floating single piece tapered towards the front unit. At the back, the 946 comes fitted with a round tail light, which is flush fitted with this scooter's body. The rear also has provision for engine cooling with several vents. The 946 has been given grey old school pressed rims that go really well with its overall designing language.

The engine offered within the upcoming model is a 125 cc, four-stroke, single-cylinder and three valve air-cooled, built by Piaggio. It is expected that the performance oriented engine of Piaggio Vespa 946 will churn out a maximum power of 11.7 bhp, which is quite accepted. A 150 cc fitted version of the 946 is also on the card of the auto maker for some international markets that is expected to offer around 13 bhp of peak power. Piaggio also offers top of the line disc brakes at front and rear wheels of the Vespa 946.

The 946 model is technically sound with anti-lock brakes and traction control. Additionally, the 946 is available with a long list of fitted accessories, which will surely lure the Indian buyers. The optional accessories offered with the upcoming model will include a windscreen, chrome painted luggage carrier and customers can also be picky regarding the colour of the seat, palm grips with a helmet bag as well. Piaggio is also providing its customers with handlebar muffs, leg covers for the rain and machined aluminium parts.

The company is trying to make sure that it makes available all the stated accessories in India as well. The Vespa 946 is a scooter, which will be out of reach for the average Joe in the automatic scooter segment. Piaggio have already intimated that it plans to launch the scooter with a hefty cost. Vespa's 946 is presently under homologation within India, and seems all set to become the most good looking scooter India has experienced till now. Sources close to the development process stated that the launch of Vespa 946 is expected towards the end of this calender year; however nothing is confirmed as of now.