The charge of the mid-sized luxury sedan is now in full swing with the arrival of the new BMW 5 Series. Recently launched in India, it is being offered with a petrol motor and three diesel engine options.  Our fray today looks at the mid-level 520d luxury line which takes on the Mercedes-Benz E220d and the Volvo S90. These will be the big movers for their companies in terms of volumes, hence we have decided to see what they have to offer. 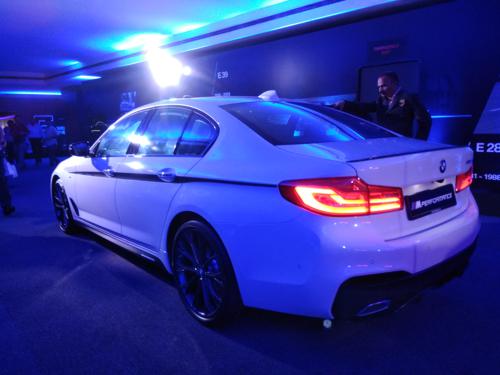 Exterior
The basic design of both, the 5 Series and the S90 is quite similar ¬– low rooflines and lengthy front end. The E-Class, in that respect, is a little more stately, as it mimics the S-Class in terms of looks. All three cars have unique grilles and tail lamp designs and in a way, these connect the cars to their heritage. There are subtle hints of chrome across all three cars which add to their distinct identity. If you want presence, then the E-Class is your go-to machine while the BMW 5 Series comes in second, as it is louder than the S90, not a whole lot but enough to come in second.

Interior
The essential feature list across all three models is roughly on the same page. You get the usual – electrically adjustable seats, multi-zone climate control, infotainment system with large display (which is a touch system in the Volvo and one of their main selling points) and leather upholstery. The main advantage that the E-Class has is that it is a long wheelbase version which means it is a full 100mm over the rivals in terms of rear seat space and this translates into quite a bit of extra leg room. However, if its minimalism that you are looking for, then the Volvo is your go-to machine as it offers a massive touchscreen which pretty much has all the cabin functions. The BMW’s ace up its sleeve is gesture control, which has been adapted from the 7 Series.

Performance
Here is where the cars stack up against each other on an even fighting place. They are all offered with 2.0-litre four-cylinder turbo diesels. These engines all produce 400Nm of torque and between 187-192bhp of power. The Merc hits its peak torque the earliest at 1600rpm and tops out the power list with is engine producing 192bhp@3800rpm. It is the newest engine of the lot and is mated to a nine speed gearbox. Finally, the BMW and the Mercedes are rear-wheel drive cars while the Volvo is a front wheel drive.

Conclusion
It’s a close match and this is due to the manufacturers realising their strengths. They have covered what is expected and picked one feature as a defining point for the model and in the case of the BMW, it’s the sporty leaning both in terms of performance and looks, which is what has been the BMW’s main selling point since its inception.