The South Korean car maker, SsangYong, that is owned by the Mahindra & Mahindra group is gearing up to launch its Rodius Multi Purpose Vehicle (MPC) in the Indian auto market. Ssangyong tasted success in India after launching its Rexton model, which is currently the only product in its portfolio. The Rodius MPV was exhibited at the 2013 Geneva Motor Show by SsangYong with its few variants. This model happens to be a spacious vehicle, which will be available with various seat arrangements, including 7, 9 and 11-seater layout. 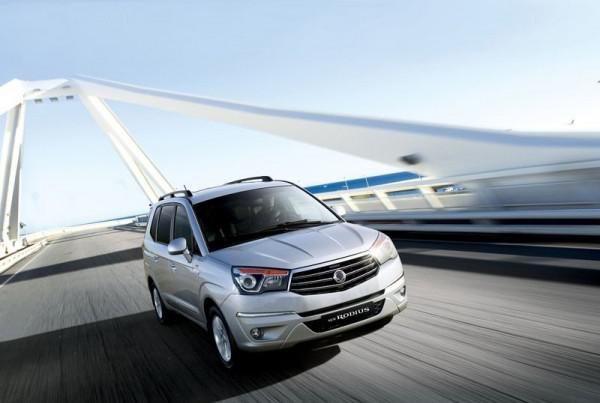 It was speculated that the SsangYong Korando will be the next product to be launched in India under Mahindra-SsangYong alliance. However, now it is confirmed that the Rodius will be the next product in the line-up instead of the Korando. This MPV is powered by the all new four-cylinder 2 litre turbo diesel powertrain. Boasting of the variable geometry turbo charger, the powertrain is capable of producing the maximum power of 156 bhp and peak torque of 360 Nm. SsangYong will offer the new vehicle with an option of six-speed manual and five-speed automatic transmission unit. While, the model will come with rear wheel drive as a standard option, the top end variant will feature an All Wheel Drive system.

SsangYong Rodius comes with independent suspension setup in front and independent multi-link setup at rear tyres. This model boasts of a 3-metre wheelbase that makes way for the 11 seater arrangement. It is equipped with safety and comfort features like Anti-lock Braking System (ABS), Electronic Brake-force Distribution (EBD), Brake Assist (BA) and anti-roll over protection. There are other features like airbags, cruise control, ventilated electric seats, parking sensors and infotainment system with Bluetooth, which makes this MPV an attractive proposition. It is expected that the model will be launched by the end of 2013 or at the beginning of 2014 with a price tag of around Rs. 20 lakh.

Mahindra & Mahindra recently invested 80 billion Korean Won in the South Korean car manufacture for new shares. Buoyed by the investment, SsangYong is now exploring the possibilities of new product development in the small engine and small crossover utility vehicle, as well. This will help the car maker to gain a strong foothold in the ultra-competitive Indian automotive industry.