Mercedes-Benz India, a completely owned subsidiary of the German luxury automotive marque, is set for the launch of its new A-Class hatchback range in the domestic premium vehicle market on May 30, 2013. The company has joined hands with MTV for an exciting A-Class Pulsate Contest, as part of its brand development campaign for the soon-to-be launched model. The prices of the upcoming Mercedes-Benz hatchback range would be revealed to public on the day of its official launch in the country. 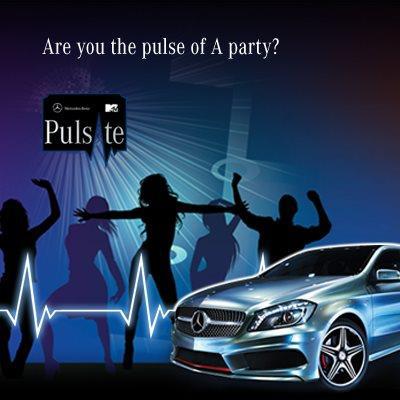 As per the rules, one lucky winner of Mercedes-Benz MTV A-Class Pulsate Contest will a get a change to go for an all expenses paid trip to Ibiza or will be driving home the new A-Class car. The enormous prizes are expected to take excitement for the A-Class launch to an entirely different level among the domestic car enthusiasts.

Mercedes-Benz India is targeting its upcoming A-Class models at the young Indian style and performance oriented car enthusiasts. The German auto maker is claiming its A-Class to be ‘The Pulse of a new generation’ on its official website. The premium hatchback appears stunning on the initial previews uploaded on the website and is expected to become the company’s next big volume puller in the Indian luxury car market. Industry experts believe that A-Class would become the company’s cheapest offering upon its arrival in the country.

In order to participate in the A-Class Pulsate Contest, one needs to post a snapshot of a party with friends on the popular micro blogging site- Twitter. The party photos should be tweeted with a hashtag- #aclasspulsate, for a valid entry. One can also share why he/she is the life of a party on visiting the website - www.mtv.in.com/pulsate.

The yet-to-be launched Mercedes-Benz A-Class range is expected to come in both petrol and diesel powered options in the country. Further, the premium hatchbacks would be marketed as Completely Built Units (CBUs), however, the company could begin localised assembly if the demand for A-Class hots up in the Indian market. The German premium car maker is expected to introduce A-Class with a starting price close to Rs. 20 lakh.

Mahindra mulling at reducing ground clearance on SUVs in India