Mercedes-Benz, the German automotive giant, revealed the all new 2014 S-Class in Germany recently, which has already been reached to China. It is expected that the new model will be showcased at the 2013 Chengdu Auto Show to be held in the month of September. The S500 variant of the new model was spotted at the Tianjin Binhai International Airport, which is a top end model. It is powered by the 4.7 litre V8 powertrain that churns 448.8 bhp of maximum power and 700 Nm of peak torque. The 7G-Tronic Plus transmission that comes mated to the powertrain, is designed to power the rear wheels. In the Chinese market, the new car will be locking horns with the likes of Audi A8, Jaguar XJ and BMW 7-Series. 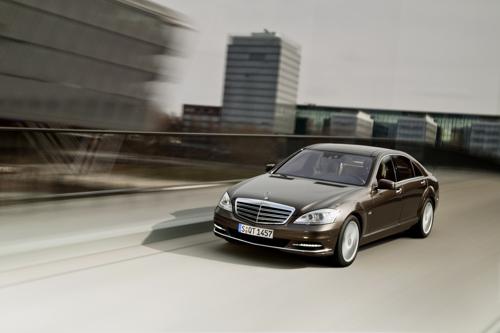 The car maker is offering the all new 2014 S-Class with several new features that are intended to enhance the overall looks of the model. It is also speculated that all variants of the new car will make their debut in Indian automotive industry by the end of 2013. Considering the high demand for diesel-run cars in the country, it is expected that the German brand will offer its new S-Class in both petrol and diesel variants. Also, Mercedes-Benz may plan to assemble the new model in the country to price it competitively in the market and generate volume.

The all new 2014 version of the flagship S-Class will continue to offer the trademark comfort, space, efficiency, safety and quality for it is known around the world. The car is expected to be launched in at least 5 different variants, such as long wheelbase saloon, extra long wheelbase saloon, short wheelbase saloon, cabriolet and coupe. It is bound to be a success in the Indian automotive market as there is a huge customer base for luxury car segment in the country.