The Jaguar XF Sportbrake has been teased ahead of its official launch on 14 June. The estate was previewed covered in a tennis-ball pattern vinyl wrap, given Jaguar’s association with Wimbledon Championships 2017. 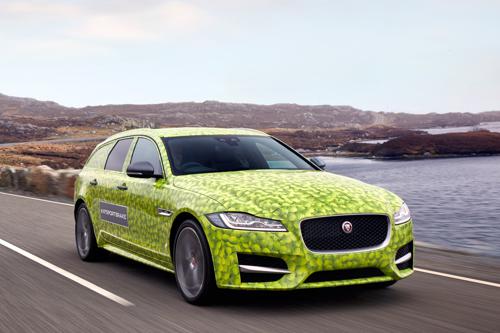 The XF Sportbrake adopts its front fascia and the profile upto the B-pillar of the XF sedan, on which it is based. The estate’s elegant looks have been enhanced thanks to the trademark J-Blade LED daytime running lights, honeycomb grille and the long bonnet. Past the B-pillar, the roofline has been extended with the boot lid spoiler giving it sporty undertones. It should also offer better practicality than the sedan, with extra headroom for the passengers and extra boot space.

Under the hood, we can expect the XF Sportbrake to get the same powertrain options as the XF. The base variants get four-cylinder petrol and diesel engines, and supercharged V6 in the top-spec variants. We also expect a four-wheel-drive variant to be on offer, although there is no news about performance-focussed XFR-S or XF SVR trims. The XF Sportbrake will compete against the likes of the Mercedes-Benz E-Class Estate and the BMW 5 Series Touring.