The Indian arm of Volkswagen, a well appreciated German automotive marque, has announced a mouth watering offer on the purchase of its Vento model in the domestic car market on the Valentines Day eve. As per the latest offer, Indian car enthusiasts can drive home in a Vento luxury sedan by paying just 50 per cent of its retail cost with the remaining amount to be paid after a course of 12 months. The enticing proposition by the German auto major is valid for a limited period (four days), starting from February 14, 2013. 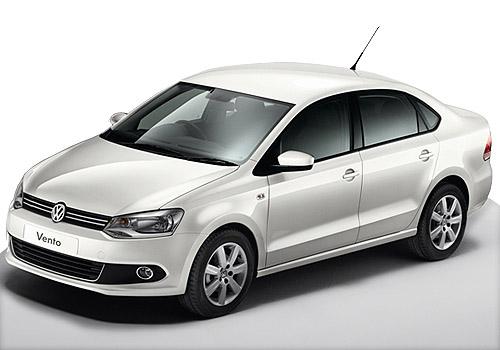 Evidently, the Vento model is one of Volkswagen India's best selling products in the domestic passenger car market and contributes a major fraction to bulk of its sales in the country. Coming to under-the-hood specifications of Volkswagen Vento, the luxury saloon comes fitted with a 1.6 litre engines in both of its petrol and diesel models. The Vento petrol motor churns out a peak power output close to 104 bhp at 5,250 rpm, along with a maximum torque delivery of 153 Nm at 3,800 rpm. Further, the diesel engine belts out same power output as its petrol sibling and belts out a maximum torque of 250 Nm at 1,500 to 2,500 rpm.

At present, the German auto major offers its Vento model within a price bracket of Rs. 7.3 lakhs and Rs. 10.2 lakhs in the Indian auto market. The stylish sedan comes trimmed with the much fawned upon 2 DIN music system coupled with Bluetooth connectivity, Aux in support and an SD card reader. The Volkswagen Vento is pitched in a stiff face off against the likes of Honda City, Hyundai Verna Fluidic, Maruti Suzuki SX4, Skoda Rapid, Renault Scala and Nissan Sunny amongst others in the domestic market.

AMG A45 the world's most powerful production hatch ever