BMW reveals the new Z4 Concept at the Pebble Beach

BMW has revealed the all-new Z4 Concept at the ongoing Pebble Beach Concours d'Elegance. The Z4 Concept design study previews the production version of the Z4 Roadster set to be unveiled over the course of next year. 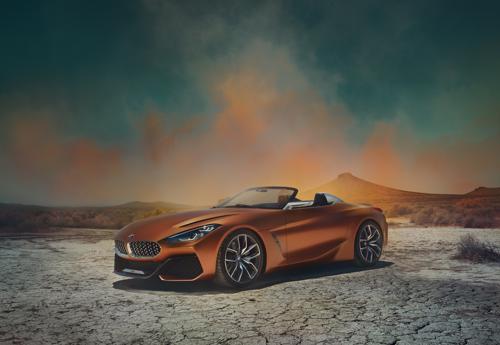 The Z4 Concept rocks a bold chromed kidney grille and massive air vents on the imposing front bumpers similar to one seen on the 8 Series Concept. The LED headlamps have a sharp lightning signature feature which are now stacked above each other rather than placed side by side like in all other BMWs. The bonnet is smooth with just two sharp creases on either sides. Being a concept car, the windscreen and rear view mirrors are slender and futuristic. The air-vents on the front-side fender and the 20-inch two-tone, five twin-spoke wheels complement the flared wheel arches of the Z4 Concept perfectly.

The Roadster’s roll-hoop buttresses behind the seats are ultra-modern and makeweight with the concept in a contrasting satin steel finish. Sadly, they won’t make it to the production vehicle as was seen in the spied prototype of the roadster with the top down. The posterior of the Concept is minimalistic with a set of sleek LED tail lights which are a reminiscent of the one seen on the 2016 Vision Next 100 Concept. It is combined with the tight lip spoiler together with blacked-out diffusers and integrated dual chrome exhaust tips. 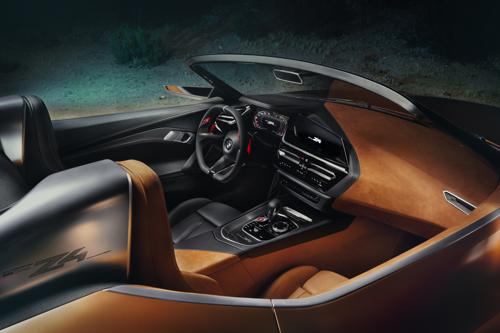 On the insides, we have a driver focused cabin. The sporty steering wheel is futuristic, but won’t look out of place if placed in the production vehicle. Despite being in the concept guise, the cabin is laid out in the typical BMW fashion. Everything is right in place and wrapped in exotic material. There is a floating touchscreen dominating the dashboard with an all-digital instrument binnacle. Interestingly, there is a small screen on the bottom of the steering wheel to display information such as lap-times. The driver seat is wrapped in black Alcantara while the passenger seat gets the same orange hue as the exterior body paint. 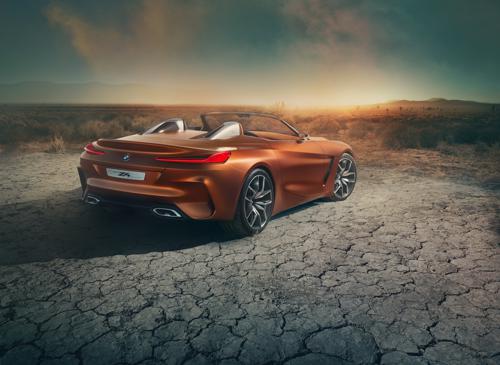 Overall the Z4 Concept is a gorgeous looking vehicle. We hope the production spec Z4 Roadster keeps most of the design elements from this Concept. The third generation Z4 Roadster will make use of soft top roof, as opposed to the hard-top convertible of the current generation. The powertrain details aren’t available yet. However, the production spec Z4 is expected to be powered by turbocharged four and six cylinder engines with an automatic transmission and rear-wheel drive as standard.