As for design, the BMW Z4 Roadster gets a long bonnet along with classic soft top and short overhangs that define the characteristic roadster silhouette of the car. The BMW convertible also gets a new mesh grille and distinctive vertically aligned LED headlights. The large aerodynamic air vents on the front wheel arches further enhance its sporty appeal. As for the rear, the Roadster gets slim LED taillights, a distinctive rear spoiler, diffuser and exhaust tailpipes. The company claims that the electric soft-top opens in mere 10 seconds.

As for the interior, the Z4 Roadster offers driver seat memory function and increased storage space behind the seats with a retaining net, large cupholders under the centre armrest cover and roomy door pockets. On the other hand, the standard specification for the BMW Z4 M40i includes a leather and Alcantara interior with blue contrast stitching and blue piping. As an alternative to the standard Quartz Silver, the trim finishers can also be outfitted in high-gloss black, aluminium mesh effect or aluminium tetragon. Furthermore, the M sports seats come with additional adjustment options which includes the M leather steering wheel.

Find a list of all 2 petrol versions of BMW Z4. This table includes on-road price which covers all costs like RTO and Insurance. Lots of character that's mated to a lot of zest. Find out more about this BMW... A teaser this BMW Z4 is! So a spank is a given, right? Slotting into Sport Plus mode, I choke the brake pedal with my left foot and give her foot full of throttle. All hell is let loose as the spirit within wags the Z4’s rear, wheels spinning fanatically, begging you to release it from the shackles of its brakes. I defiantly obey. Instantly, it lets out a deafening scream as the monster unleashes its tormented might. Some of my abdominal internals begin to cringe as I’m thrust into the seat; literally, like taking off from an aircraft carrier. I mean, what else would you expect when strapped on to a 375bhp/500Nm 3.0-litre inline-six? Performance is like stage-1 time travel, if there’s even such a thing; look at a distance and be there kinds! Streetlamp poles begin to warp, the speedo dials mimic a concertmaster and brain processing takes a seizure. The result? Well, how about a 0-100kmph of 5.0 seconds! Howsoever one likes their performance served, it’s instantly granted. And making this possible is the slick-shifting superbly tuned eight-speed transmission. With so much oomph at hand, overtaking chores had the possessed me insulting other motorists; 20-80kmph/40-100kmph in a crisp 2.89/3.46 seconds. There’s so much at play here that even staying within the speed limits plays havoc with your mind. Especially with the atrocious crackle and burble from the exhaust. Surprisingly, the low set Z4 didn’t give us anxiety attacks. Particularly over the ridiculously tall speed breakers, you see around nowadays; nice and easy is the trick. Ride quality-wise, although firm, it isn’t bone-jarring even in the sportiest setting. However, we humourously found our collective rears briefly in the air when we missed spotting a sharp bump! At higher speeds, the Z4 rides supremely rooted, like a skyscraper. It’s a trait that’s further complemented by sticky wide rubber and sharp brakes. Sadly, handling is far from exciting despite the 50:50 weight distribution, M Sport differential and quick steering. It falls short of even being adequately progressive. And this, combined with the constant corrections and inputs around bends, leaves one feeling not entirely connected at any given point in time. Getting into a sports car is like an event in itself. Enviously fold and stuff one’s self into the cabin and shut those charming rimless doors. Getting awe smacked is inevitable, even as you process the sporty contours of the dash that’s draped in soft-touch materials and highlighted pristinely by brushed silver and piano-black trim. Now, despite having a wonderful Harman Kardon system to run your playlist, we preferred to get hooked on to the soundtrack exiting the exhausts! And in case one needs cheering up, just drop the roof for a ticket to stardom. Meanwhile, the seats are firmly cushioned with intense support that will hold one snugly whilst attacking corners. Having said that though, there’s only a wee bit of room in this cabin for the twin seats to be adjusted back-and-forth. So, in other words, apart from the two seat-back pockets and a cubby net, there isn’t any storage space behind the seats. Plus, the door pads are narrow enough to accommodate only the slim stuff. For everything else, the 281-litre boot surprisingly suffices as per sports car standards, with no temporary intrusions whatsoever when the roof is folded. Yet, the Z4 has its flaws. For one, rearward visibility is limited. Then, the doors don’t shut with an appealing noise, there’s the unnecessary effort needed to open the boot-lid and finally, being a drop-down convertible means noise insulation isn’t up to the mark. But certainly, it’s a small price to pay for a wind-in-the-hair experience. As for its standout features, there’s the ‘BMW Live Cockpit’ instrument cluster that flows onto a 10.25-inch touchscreen which is run by iDrive and offers wireless Apple CarPlay, loads of M Sport badging, and sporty steering with large paddle shifters. There’s a charm that cars with long bonnets and crisp backsides present. Like for instance, the oldies such as the 70’s Chevelle or a GTO. A design flair that simply leaves you speechless. Here, ogling at the Z4’s seductive lines wrapped around those sharp 19-inch alloys, and on to the wee rear, unknowingly becomes second nature. Chances are that once you buy a Z4, you’ll end up hanging around it more often than not. We can easily state that very few sports cars can make you feel special in a multitude of ways. More so when you bring together performance and everyday drivability. This is where this BMW Z4 M40i excels. Everything about its performance, looks, and experience is intensely invigorating. Sure, it doesn’t score well when it comes to steering feel, cabin stowage, rear visibility, and some glaringly ugly gaps where the soft roof folds. But as I see it, these aren’t deal-breakers. So, if you happen to have a crore stashed about, what are you waiting for?

Note: Specifications for Z4 sDrive 20i have been mentioned 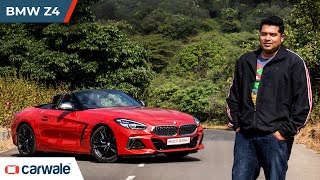 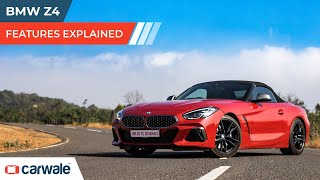 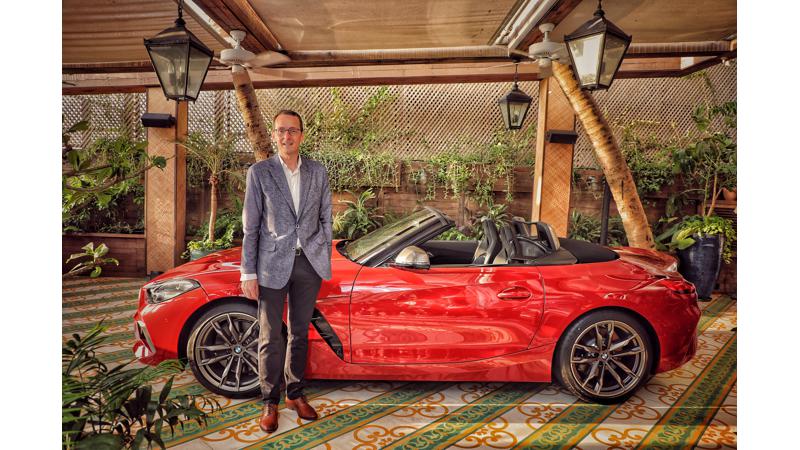 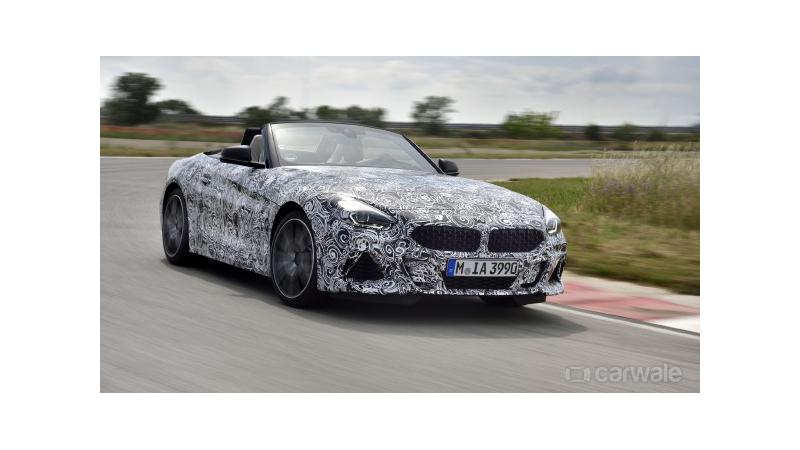 The 2019 BMW Z4 was spotted testing recently. This time around the German car manufacturer has revealed its plans to commence the Z4 production later this year. The new model will first be launched 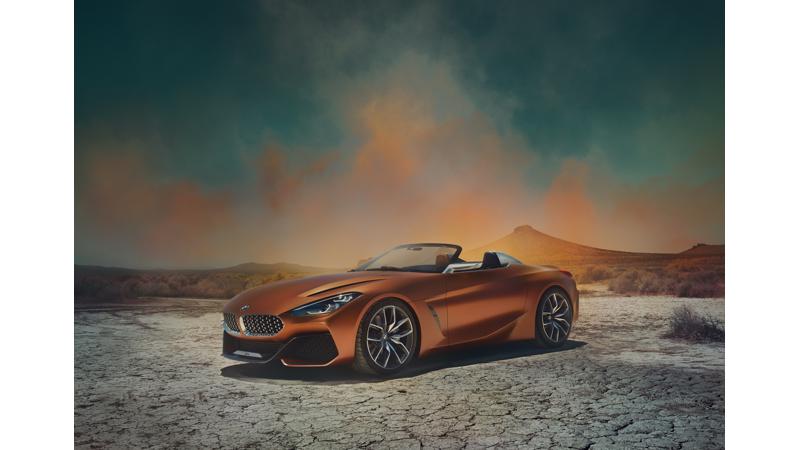 BMW reveals the new Z4 Concept at the Pebble Beach

BMW has revealed the all-new Z4 Concept at the ongoing Pebble Beach Concours d'Elegance. The Z4 Concept design study previews the production version of the Z4 Roadster set to be unveiled over the

BMW-Z4-Patent The patent images for the 2019 BMW Z4 surface online, revealing every element of the upcoming car&rsquo;s styling. Previous media reports indicated that the company will showcase

The BMW Z4 Concept emerged as the centre of attraction at the German automaker&rsquo;s stall at the Frankfurt Motor Show 2017. As seen in images, the car flaunts a short rear deck, long hood, compact