The luxury car manufacturer from Germany, Audi, has finally launched its RS 5 Coupe on July 2, 2013 in the Indian auto market at a price tag of Rs. 96 lakh (ex-showroom, Maharashtra). The RS5 comes fitted with a 4.2-litre V8 motor combined with a 7-speed S-Tronic gearbox, which churns out a maximum power of 444 bhp with an alarming torque of 429 Nm. With this power output, this performance car smoothly glides from 0-100 kmph within just 4.5 seconds. 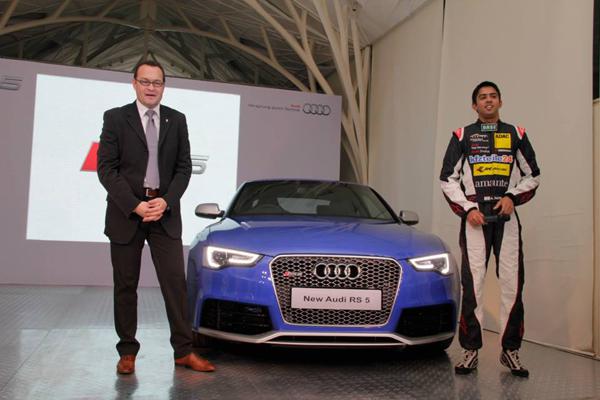 The latest RS5 comes with a refined front grille, a slightly better bonnet styling and an improved looking Audi signature day time running LEDs, attractive tail lamps, plus updated front and rear designs of bumper. Major additions to RS5 is an sport exhaust system and a stereo Bluetooth connectivity, which adds to its USP. Accessories of RS5 include heated and cooled seats, a Bang and Olufsen sound player for music enthusiasts, a sports suspension with dynamic ride control and drive select dynamic system for smooth manoeuvrability.

Owing to a drastic fall in the value of rupee in the last couple of weeks, the Head of Audi India, Michael Perschke disclosed company's plans to raise prices of the model to offset the effect on company's margins. In the recent budget, government revised the excise deductions on SUVs of 4-meter and above from 27 to 30 per cent. That means an SUV of 4-meter or above in length or engine capacity above of 1500 cc or above will result in an excise duty of 30 per cent, compared to 27 per cent earlier.

Sources close to the development process revealed that the Audi RS5 coupe has all the goodies a customer hopes for, including mileage and superior performance. With RS5, company hopes to enforce and maintain the Audi brand as a leader in super sports car segment, specially in India. With the new RS Coupe and the upcoming S6 launch, Audi is aiming to grow by over 40 per cent by selling 100 units in 2013. The company has so far sold over 150 units of R8 and RS sports cars in India, since it entered the sports car space.

Perschke further states, “We are confident of maintaining the sales momentum and meeting our target of selling 10,800 cars this year. So far this year, we have launched six models including the RS 5 Coupe and we aim to roll out another 3 to 4 new models and variants in the remaining part of the year.” From its existing 26 dealership networks, the company has plans to increase this number to 34 by the end of this year, sources close to the company said. It has opened new showrooms in Bhubaneswar, Lucknow and south Mumbai.