Audi RS5 Coupe has been launched in India for the price of Rs 1.10 crores (ex-showroom all-India). This is the second generation of the sports coupe. The new RS5 Coupe goes head to head with the BMW M4 which is priced at Rs 1.33 crores in the country. The Beemer also has four-door sedan version, the M3, while the other rival is the Mercedes-AMG C63 in India. The RS5 can also be an alternative to the Jaguar F-Type V6 Coupe and the Porsche 718 twins.

The RS5 gets an aggressive styling with large functional air-vents up front, sleek LED Matrix headlamps, hair-splitters and slopping coupe roofline. It sits on massive 20-inch wheels with dual oval exhausts sticking out the diffusers at the back. There are RS badging all over with contrasting silver trims to add to the sporty appeal. The carbon fibre roof and a petite lip spoiler add to the appeal.

Even after being sporty, the cabin of the RS5 is luxurious. It gets It gets all the luxury features considered standard in this part of the market but trimmed out in the Audi RS badging and interior design. The whole cabin is in a shade of black with carbon fibre and chrome inserts as a part of the design package. Additionally, quilted sports seats with RS logo stitched into them are also thrown into the deal. The instrument cluster is the virtual cockpit while the steering wheel has been given special inserts and badges as a part of the sporty touches.

Under the hood, the 4.2-litre V8 has been replaced with a twin-turbocharged 2.9-litre V6 engine producing 440-bhp of raw power and 600Nm of twisting force with Quattro AWD and an eight-speed Tiptronic gearbox. The output is the same as the before but the torque has gone up by 100Nm. You can do 0-100kmph in 3.9 seconds and then go on to hit a top speed of 250kmph.

Find a list of all 1 petrol versions of Audi RS5 [2018-2020]. This table includes on-road price which covers all costs like RTO and Insurance.

Audi RS5, is one of the strongest names when performance coupes are considered. It boasts of a naturally aspirated 4.2L V8 engine pumping out a great deal of power and torque which is transferred to the road via its all wheel drive system. We managed to g

This has to be one of the sexiest Audi’s I have ever driven. It does not get Tony Stark inspired flair of an R8 neither does it hug you in luxury instead it acts as a pure muscle car with a German pedigree.

This two door coupe can go fast and seriously fast. It does a sprint of 0 to 100 km/h in 4.6 seconds which means before you can complete saying Vorsprung durch Technik, the speedometer and tachometer needles will be on the other side of their starting point. 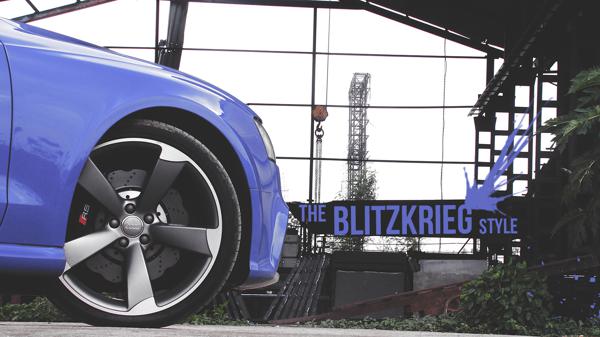 Audi RS5 is one of the strongest names where performance coupes are considered. It boasts of a naturally aspirated 4.2L V8 engine pumping out a great deal of power and torque which is transferred to the road via its all wheel drive system. How does it feel to drive a performance car like this on normal roads? We find out in our review.

They all look the same don’t they....NO! It has a face similar to its luxury siblings but then the similarity ends there as the RS5 has an expressive face. The aggression in its front lines paired with those shrewd narrow headlights won’t encourage anyone to mess with it. It has a large single frame radiator grille with a honey comb style mesh. Lower air intake vents on the bumper can swallow litres of air. 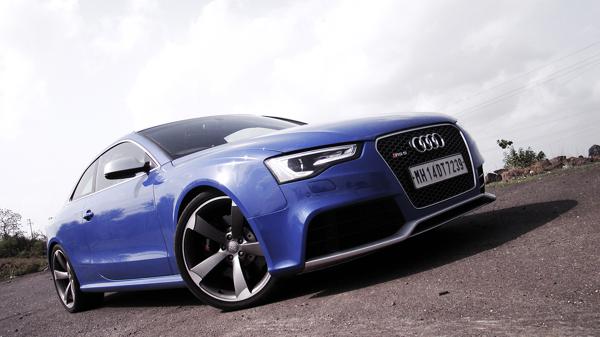 It has a pronounced jaw line with a sporty lip spoiler in an aluminium finish. A strong shoulder line and a clean roofline make it look crisp. The forged Aluminium turbine shaped wheels have a machined grey finish. These wheels are expensive and might cost you a Tata Nano to replace.

The RS5 is a two door coupe and its dimensions look near to perfection. The interesting part about its design is even the oddly shaped bits look in proportion when seen from any angle. The descending roof line, which does not flow parallel to the rear window, look dynamic. There is a gentle flare on wheel arches. The muscular contours on the entire body scream about its performance potential. 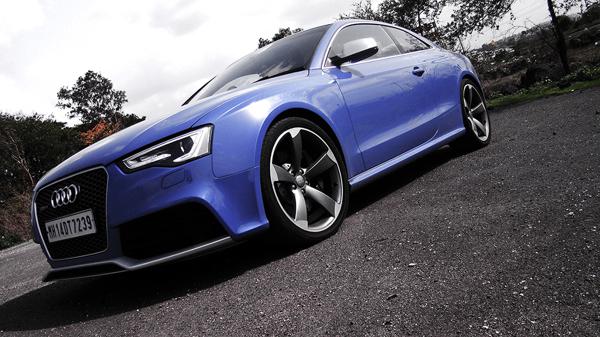 A German car with an Italian rear sounds weird but the RS5 does that with great panache. The rear profile reminds me of the Maserati’s elegant yet sporty tail design with clean sections. It has an integrated boot lip spoiler. This is not a pseudo fast looking car as it gets a real spoiler tastefully hidden in the rear boot lid which tilts upward at a gentle click from inside. 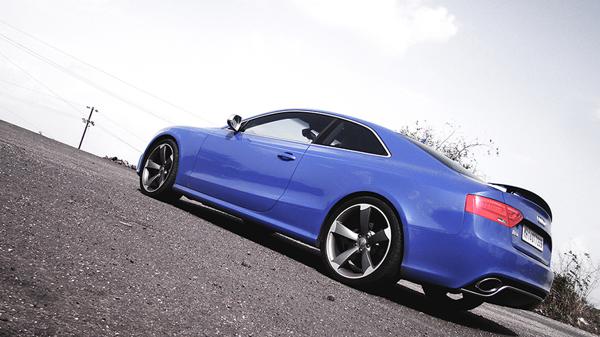 If luxury is what you seek in a car, then it is better to step out of the RS5 and get inside one of the business class Audi’s. The RS5 has interiors which have been designed keeping its performance DNA in mind. The overall theme is dark with subtle red accents. 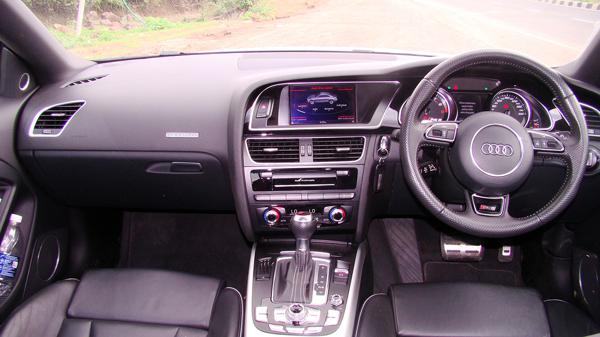 It is a two door coupe and thus gets rear seats. On paper, the RS5 can seat four people which is only possible if they have an athletic built because it is extremely difficult to make two sit comfortably in the rear. Front row seats have electrical settings to shift them forward and help entry of rear passengers. Blame it on my size, I never made it to the rear of the RS5 (...or perhaps I didn’t intend to).

The three spoke steering wheel with RS5 badging looks smashing. Even the instrumental panel with special scaling and black dials with white markings look great. There is also an additional lap timer with oil temperature gauge. 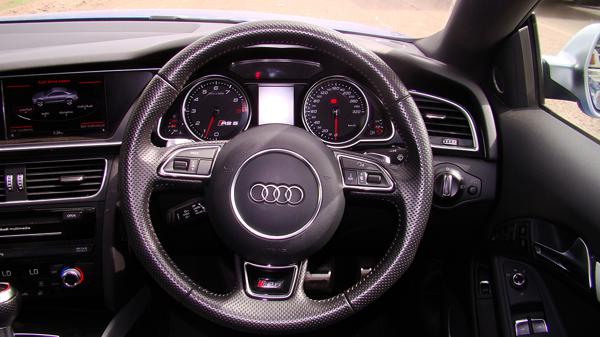 Contrasting brushed aluminium finished shifters and pedals compliment the overall interiors. The same can be seen on door trims too. It might not be a practical everyday car coz of its performance and mileage but when it comes to storage options, the RS5 offers multiple options which range from cup holders, bottle holders even individual holders for the rear passengers and then it gets a large sized boot. 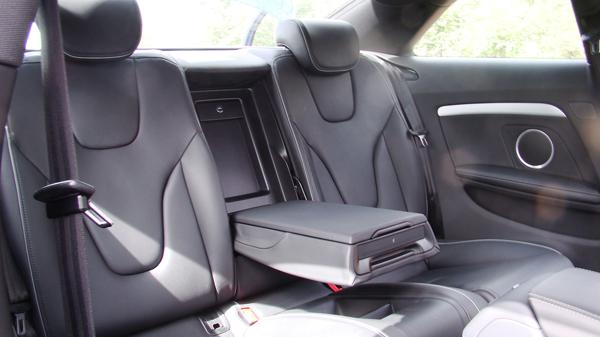 The Audi RS5 is a fast car is a no brainer statement. What else would a naturally aspirated 8 cylindered 4163 engine do? It produces 450Hp of power and a peak torque of 430Nm between 4000 to 6000 rpm. Naturally aspirated cars are slowly vanishing thus if you plan to get a souvenir, then the RS5 should do fine. 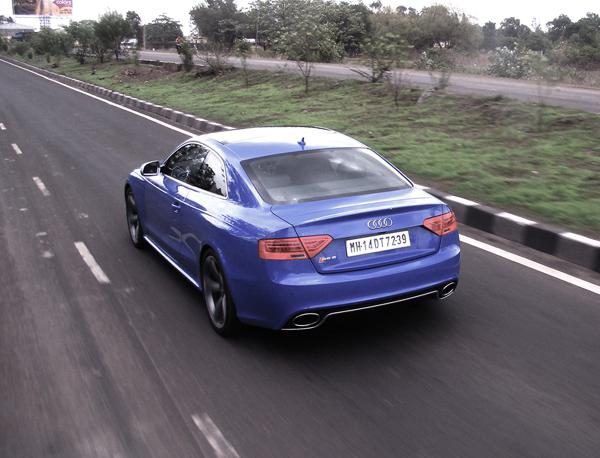 The all wheel Quattro grabs the road like claws of an eagle. Get this German rolling and the sudden rush of power makes the heart race. The throttle is nimble but the response isn’t as all those numbers can be related to the time it takes to make the surroundings go in a motion blur. 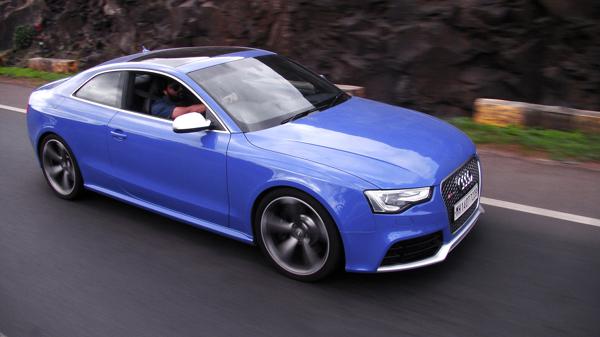 It is all about precision when it comes to such high performance cars and Audi’s 7-Speed S tronic transmission does a brilliant job. It takes less than a second before shifting into the next gear thus reducing lag times to almost zero. In Auto mode, the shifts are smooth and but in the sports mode, the RS5 just transforms and all the machinery and equipment inside starts making complete sense. 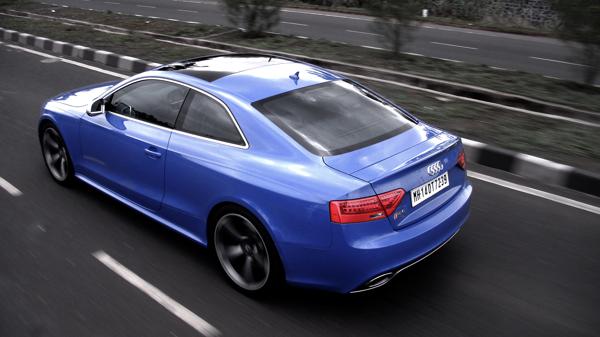 Those wheels and tyres look amazing but they go beyond being mere pretty additions as the grip these low profile tyres offer especially around corners is simply great. A lot of credit also goes to its meaty braking too. The 265 / 35 R19 tyres are best suited on clean roads without any undulations. It is only when the roads begin to get uneven where these tyres give up on performance. Traction remains its high point but then coz of the low profile they do not sufficiently insulate the cabin from disturbances caused by the road. 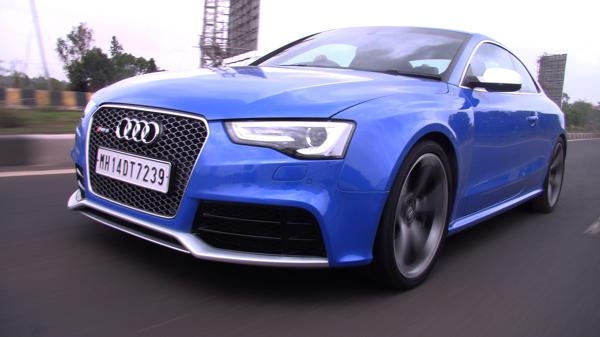 It has muscle car inspired styling but at the same time the aerodynamics of the RS5 helps it cut through air effortlessly. The flowing hood line paired with the front pillars and other sections on the front guide air flow in the right direction. Even the scoops on the front bumper help channelize air flow to a great extent. During our test run, It delivered a mileage a 10kmpl which is similar to others in the segment.

Fiction is fancier than truth and the RS5 proves that right. The other Germans who have a bigger heart and pump our more numbers come at a heavier price. The other side of the story is the RS5 is the only rebellious looking built-for-performance coupe unlike the Mercedes Benz E63AMG which looks like a fast family car. The BMW M5 looks better than the AMG but it does not have the raw appeal. 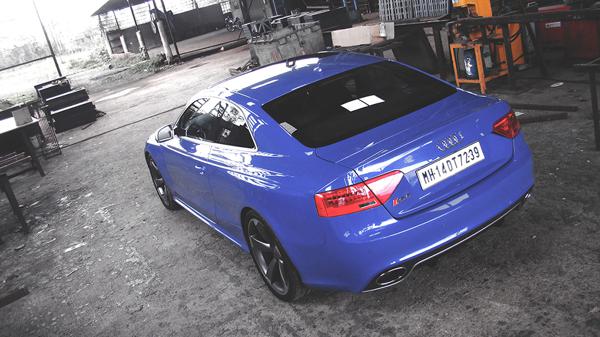 There is no practicality involved in buying a RS5 but then if there is a hooligan in you who has a childish fetish of waking up the entire neighbourhood at 3AM then one must get it for sure. 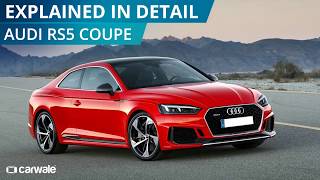 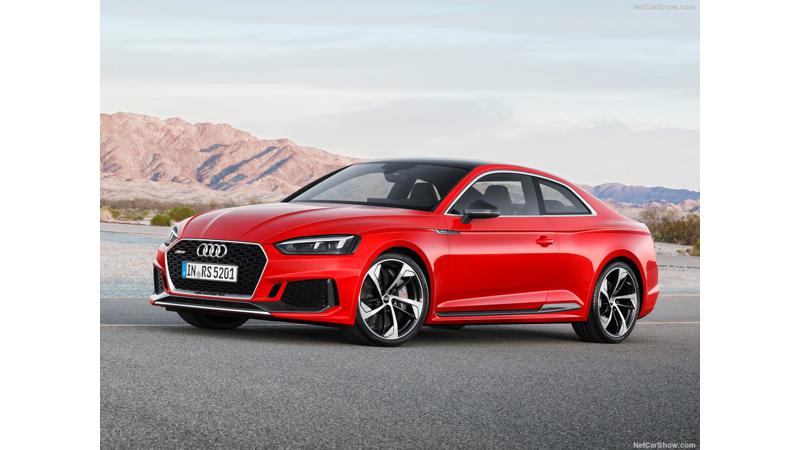 The new second-generation Audi RS5 Coupe has been launched in India at Rs 1,10,65,000 (all-India, ex-showroom). The new RS5 Coupe totally outperforms the S5 and owing to the new platform, it is now 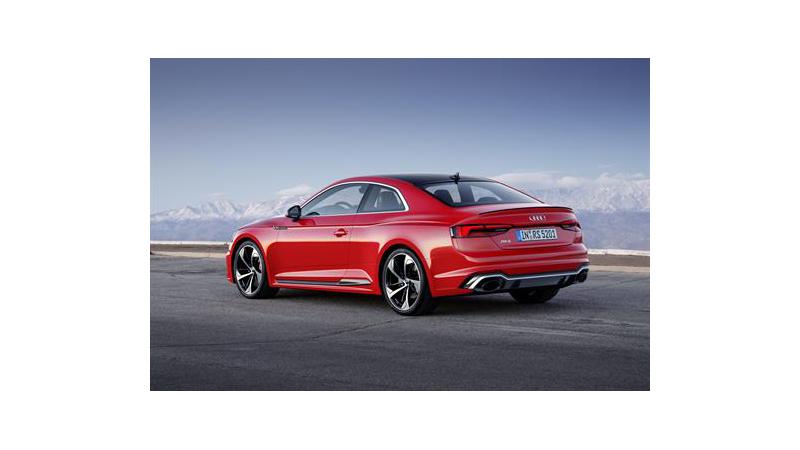 The latest generation Audi RS5 has been unveiled at the 2017 Geneva Motor Show. The flagship model for the &lsquo;5&rsquo; range of vehicles from the Four Ringed manufacturer, it gets a new design

Audi has launched the 2018 RS5 coupe in India at Rs 1.10 crores (All-India ex-showroom). It&rsquo;s a high performance addition to the A5, S5 and A5 cabriolet range and the car that has been launched

Audi has officially launched the latest-gen RS5 in the UK. The high-performance coupe with its new 450bhp bi-turbo V6 has been priced at &pound;62,900 on-road, which roughly translates to around Rs