It looks as if lovers of Rolls Royce cars are set to receive a present from the British firm in August this year. Making an official confirmation, the iconic car maker announced that the 2014 Rolls Royce Wraith will be launched in India. A lot of hype has surrounded the launch of the Rolls Royce Wraith, which is considered to be the best car made by the company till date. In the past, Rolls Royce has been known for producing some of the most finest luxury vehicles in the global car market, such as the Phantom and Ghost. Industry experts believe that the Rolls Royce Wraith will be priced somewhere between Ghost and Phantom cars, which could be above Rs. 4 crore. 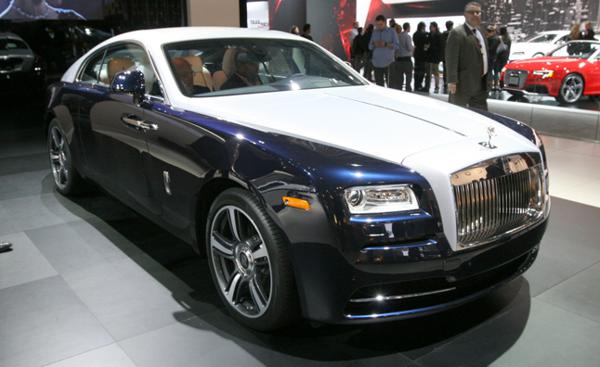 The Rolls Royce Wraith boasts of a bold design featuring fantastic silhouette that makes it look elegant. Two-tone paint combination, prominent shoulders, aerodynamic lines and an athletic built form the exteriors of Wraith. There is a vertical grille along with twin exhausts that add to the style of this luxury car. Needless to say, interiors of the Rolls Royce Wraith symbolise the class, which the brand exudes. Intricately designed, its interiors feature Phantom-grade natural grain leather, along with soft wool carpets. This car gives buyers the option of having Canadel Panelling throughout the cabin.

Powered by a twin-turbo V12 engine that has a capacity of 6.6 litres, the Rolls Royce is expected to produce a maximum output of around 623 bhp and torque of up to 800 Nm. Interestingly, the 8-speed automatic transmission gearbox mated to the engine is highly advanced as it is synchronised with the GPS and is capable of predicting changes as per the upcoming traffic and road conditions. The Rolls Royce Wraith can clock a speed of 100 kmph from the initial in just 4.6 seconds.

Several advanced technologies have been included in the Rolls Royce for the assistance as well as convenience of the driver. For instance, the Satellite Aided Transmission function makes the use of data provided by GPS to anticipate road conditions. This car also features the new Spirit of Ecstasy Rotary Controller, which includes a touch pad for easy access of the Internet, music and attending calls. Additionally, the controller has pull and pinch functions, similar to that of a touch screen smartphone.