Back in 2019, Ford introduced the updated Figo in India. This is the mid-life update for the B-segment hatchback after being on sale for almost four years. The last update for the Figo includes subtle cosmetic changes along with rejigged trim levels. The hatchback is currently available in three variant options – Ambiente, Titanium, and Titanium Blu, which can be had with either a petrol or a diesel engine option.

The Figo has retained most of its familiar styling elements and the changes are limited to mild tweaks. The bumpers have been revised with added bits for freshness along with extended chrome bezels for the fog lamps and a new mesh grille. Unlike the modern-day cars, this hatchback still does not offer LED or DRLs. Additionally, the decals add a bit of a sporty element.

The Figo gets an all-black cabin except for the top-spec variant which gets a BLU treatment, which includes blue highlights and fabric upholstery with contrast blue stitching. Additionally, the top-spec variant gets features like rain-sensing wipers, auto headlamps, automatic AC, leather-wrapped steering wheel, bigger 15-inch alloy wheels and six airbags. As a part of the new feature additions, the updated model gets a seven-inch touchscreen along with standard features such as dual airbag, ABS with EBD, rear parking sensor, speed alert, and front seat belt alert.

Find a list of all 5 petrol and 2 diesel versions of Ford Figo. This table includes on-road price which covers all costs like RTO and Insurance. We have got behind the wheel of the Ford Figo petrol automatic. 1200cc engine with a six-speed torque converter The Figo automatic that we are driving is powered by Ford’s 1.2-litre three-cylinder petrol producing 94bhp and 119Nm. A five-speed manual has been the standard offering since the car was launched but what we have here today is a six-speed torque converter that’s been borrowed from the EcoSport. It replaces Figo’s previous combination of 1.5-litre petrol and six-speed dual-clutch transmission. As a part of its offerings, you also get a sport mode that holds the gears for longer pushing you higher into the rev range while you can also control shifts by yourself using these two buttons on the gear lever. Ford has dubbed this Select-Shift.

On the go, this 1.2-litre mill needs a bit of prodding on the throttle and you see action post the 3000rpm mark with a nice surge forward in momentum. The engine is quite vocal when you rev it hard and makes a nice sound when you push it past the 5000rpm mark. In city conditions, you don’t feel the lack of bottom end grunt due to the convenience of the automatic but you have to build your momentum for quick overtakes and plan them in advance. Out on the bigger roads, you do feel a need for additional torque from the 1.2-litre motor and will more often than not have to keep it on the boil for constant highway performance. The sport mode improves performance by allowing you to hold the revs for longer in a bid to build up more speed, in fact, if you are looking to do a bit of spirited driving then leaving the gearbox in sport mode is actually the best thing to do. It’s also in the sport mode that you get access to the manual shifting option. The response from the buttons is immediate and will even give you the option of engine braking if the need arises. The Ford Figo across the range is underpinned by Mcpherson struts in the front and a semi-independent setup at the rear. You get disc brakes upfront and drums at the rear and 15-inch wheels are standard across the range.  Ford has always been known to make fun to drive cars and the Figo is right up there in the list. It’s a car that’s set up to let you enjoy your time behind the wheel and push you to be spirited when the going gets twisty. The steering is accurate with directness when it comes to inputs. As compared to its rivals, it feels heavier at slow speeds but more than makes up for it when you up the ante. As compared to the first generation and even the first iteration of this car, it’s become a bit softer in the handling department but nothing that will dampen your driving experience. Ride quality is constant both at low speeds and faster speeds with the Figo taking most of whatever comes in its way without much struggle. The automatic gearbox takes away some of the involvement that you get from the five-speed manual but not so much that you are missing out on fun time behind the wheel. Where you do feel the pinch is when the engine runs out of steam if you haven’t planned your moves in advance and need to react immediately to a situation. The cabin of the Ford Figo is only offered inan all-black theme with grey on the dashboard and if you go in for the top-spec Titanium Blu model, then you get some blue inserts in the seats as well as the doors. Now to assess the front seats, let us look at this in three parts- quality, space and ergonomics. First up, quality, and this is one of the places where Ford feels behind when it comes to the competition. There are hard-wearing grainy plastics all around and this is something that definitely stands out when you look at the cabin of cars like the Maruti Swift and the Hyundai Grand i10 Nios. Space is not an issue at all and there’s more than sufficient room for two people in front. In terms of ergonomics, everything falls to hand and all the buttons and knobs are quite big making the task of developing muscle memory quite easy. In terms of practicality, you get large door pockets as well as a plethora of storage spaces in various sizes in the centre console for added practicality. Where the front seats have so much to offer, the rear is quite bare. There are no door pockets, rear vents or even centre armrest with cup holders. These are all features in one form or another that are offered by cars in a similar price bracket. At 257-litres the Figo’s boot is segment-standard and is wide and low but with a high loading lip. The rear seatback can be folded down for additional storage space. This automatic Figo is a top-of-the-line Titanium model with all the bells and whistles. This includes climate control, height adjustment for the driver’s seat, auto headlamps, rain-sensing wipers and a reverse camera with sensors. You get a seven-inch touchscreen infotainment system with in-built navigation but without phone mirroring. This means no Android Auto, mirror link or Apple CarPlay. However, Ford has included its Pass connected car technology that comes with over 42 features. On the safety front, dual front airbags and ABS with EBD are standard across the range with the top-spec models getting six airbags. This automatic version also gets traction control; an electronic stability programme and hill launch assist. Ford has always been known to make handsome looking cars and this version of the Figo, which been on sale since 2015 is no less. While the highlight of the face is this oval grille, what’s missing and now more than ever are projector headlamps and LED DRLs. Both of Figo’s main rivals have them and you don’t even get them as an optional extra even on this top-of-the-line Titanium variant. In profile, the Figo has short overhangs, flared wheel arches as well and a very strong and very visible shoulder line. The rear of the Figo is understated but sufficiently unique that you are not going to miss it. If you want all the things that Ford offers in terms of driving dynamics, ride quality and fun behind the wheel but with the convenience of a two-pedal option then the Figo AT is your deal to go to. It's not as involving to drive as the manual and could do with more punch but will still put a smile on your face. However, on the flip side, the Figo still lacks many feel-good features like projector headlamps, a rear armrest and door pockets, LED DRLs and phone mirroring as well as is down on cabin quality when compared to the rivals.

The on-road price of the Ford Figo in Delhi starts at ₹ 5.82 Lakh for the petrol engine. Meanwhile, the top end model (Figo Titanium Plus 1.2 Ti-VCT AT) with petrol engine is priced at ₹ 8.20 Lakh.

The on-road price of the Ford Figo in Delhi starts at ₹ 7.92 Lakh for the diesel engine. Meanwhile, the top end model (Figo Titanium Blu 1.5 TDCi) with diesel engine is priced at ₹ 8.37 Lakh.

The ARAI reported mileage of Ford Figo is 18.5 kmpl.

No. Sunroof is not available in any of the 7 versions of the Ford Figo.

Yes. There are 2 Figo versions with diesel option.

Note: Specifications for Figo Ambiente 1.2 Ti-VCT have been mentioned 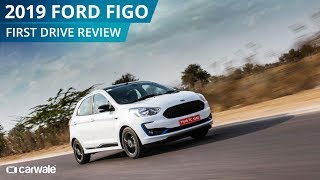 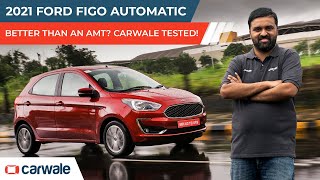 It is available in two variants, one engine option and two gearbox options

It's a two pedal version of the Figo with a 1.2-litre engine and a six-speed torque converter