The Renault Zoe EV is a supermini electric car, which was first launched in 2012 in France. Within no time, the car became the best-selling all-electric car in the French market. The Zoe EV shares its platform with the Renault Clio, but it’s slightly longer and taller than the Clio. Exterior styling seems inspired by the VW Up! However, the small window area and high shoulder-line are designed for battery-run climate control. The blue tint on windows, blue detailing in the tail lamps and headlights and a large Renault badge enhance its exterior appearance. 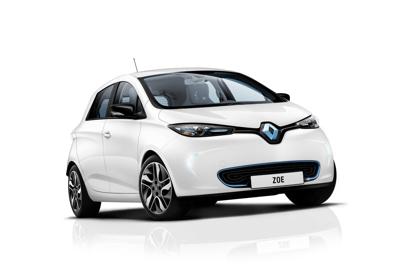 Interior, too, is borrowed from the Clio. However, the conventional dials are replaced with a digital TFT display. The R-Link info screen, comes as standard feature, offers downloadable apps, Bluetooth connectivity and sat-nav. The Zoe EV is among the very few electric cars that received a five-star Euro NCAP 2013 rating. Powering the electric vehicle is a 22kWh lithium-ion battery pack and a 65 kW (87bhp) synchronous electric motor. It accelerates 0-30mph in 4 seconds.

The car delivers a combined torque of 220Nm with a top speed of 135kmph. With NEDC cycle range of 210kms, the Zoe EV is capable to achieve 100kms and 150kms in cold and hot weather, respectively. It features a Cameleon charger, a charging system that can charge the vehicle at any level of power between 30 minutes to nine hours. The Zoe EV is one of the most eco-friendly cars that have zero emissions with 54g/km CO2 rating.

Ride is comfortable and composed. The road noise is acceptable, but wind noise, at high speeds, is very disturbing. Body control is good. Steering is light and responsive. The second-generation regenerative braking system allows the electric motor recovering kinetic energy from the vehicle to generate electricity and power the battery, during braking. The counter-electromotive force also powers engine braking.