It is true that engineers and automobile designer put in a lot of creativity and hard work to bring us implement new technologies in gadget. But the results of these experiments are sometimes successful and man a times turn into killjoy nanny devices. Mercedes – (ABC) active body control, however, has proved its worth to Prof. Bharat Balasubramaniam, its designer and we totally agree with him in calling this system Magic Body Control. 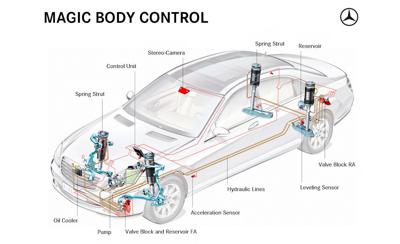 The present day ABC system used in Mercedes cars mainly employs a hydraulic piston that works upon each steel coil spring for adjusting suspension quickly and independently over the road surface.  It has been know for doing a fine job in offering a smooth and unjostled ride to its passengers. Nevertheless, the most important term is the “reaction” – suspension system has to deal with potholes and bumps once they have hit the tires. Imagine a system that could let the car knew about such upcoming disturbances on road and could adjust the oil flow according to that. What if every detail of upcoming bumps and pothole be shared with the car’s system and then wheel movement and suspension reaction could be stimulated in sync with that.

That is what exactly Magic Body Control system is meant to do. A camera is installed over the windshield top that scans the road ahead, analyzes its irregularities and flaws, and finally conveys this data to car’s ABC’s main unit. The camera is capable of scanning around 15-45-feet of road ahead and can easily detect imperfections of minute dimensions like 0.4-.-8 inches. The information allows the system to plan its immediate actions that it will take in fraction of a second to encounter the upcoming flaws.

The approach of gathering information from camera is a completely different concept as compared to the laser based technique used in F700 concept (PRE-SCAN). Apart from the ABC’s controlling unit, car’s camera also sends information to Distronic cruise control. So, how exactly does this system feels in real life? “Awesome” is the simple word that describes it. Be it a bumpy, nasty, or lumpy road, drive on it with and without Magic Body Control and you will know the difference. It will insulate you from bumps in a manner that you wouldn’t even know the difference between a rough and smooth road. The only thing that escapes from the keen vision of this new car technology is small bumps, steep obstructions, and roadside curbs. However, elimination all other kind of disturbances and obstructions makes travels on country roads and freeways.

Petrol Vs Diesel: How To Make The Right Choice?