Most new cars, these days, come integrated with in-car infotainment systems, and in recent times we have seen some new designs and features in them. Audi, the German automaker, is taking a step ahead with futuristic ‘virtual cockpit’, first made its debut in the Lamborghini Huracan, which has a 12.3-inch TFT, placed behind the steering wheel. Unlike the conventional electronic system, this displays media and navigation information and car settings. 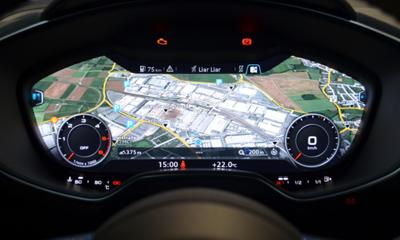 The information display, as per the driver’s preferences, can be changed via three modes – Classic, Infotainment and Sport. In classic mode, the car’s entertainment and navigation information are displayed in the middle of screen, while rev-counter and speedo dominates the binnacle. It’s more like a conventional system. In infotainment mode, information like maps, phone and audio are pushed to the front, while the revs and speed appear in small fonts at the bottom corner of the screen.

This automobile technology in car will help manage MMI entertainment system in a much easier way. In Sport mode, the display screen is dominated with the dials. Its design, too, has a potential advantage for Audi cars’ drivers, since all the information appears right in front, and the console remain neat and simple. The system’s display, however, isn’t a touch screen, but it’s very wide (1440x 540), colorful and has high-contrast sharpness. The system is powered by the latest quad-core Nvidia Tegra processor with a unique 3D program. It refreshes rev-counter at 60 frames/ second and runs animations smoothly. Its feedback is same as the analog dials. Moreover, this system offers plenty of customized options with fully individualized binnacle that displays only desired information.

Audi’s virtual cockpit also gets an optional 12 speaker, 680 W Bang & Olufsen sound system with microphone that analyzes disturbing sounds and modifies the speaker output accordingly. It has Audi’s Symphoria software that splits different elements of each audio piece to offer “wider and deeper” sound.  All 2016 Audi TT models will get a virtual cockpit instead of the traditional gauge cluster.

Audi Q7 And Bollywood Stars Who Own It