Volkswagen, the well appreciated multinational German automotive marque, will pull off the covers from its much hyped XL1 'Super Efficient Vehicle' at Geneva Motor Show on March 5, 2013. The Volkswagen XL1 is a diesel-electric hybrid prototype and bears the tag of world's most fuel efficient car, with its overtly impressive mileage rating of 111.11 kmpl. The futuristic model comes trimmed with a cutting edge plug-in hybrid mechanism and can cover a distance of 50 km on its electric powered motor. 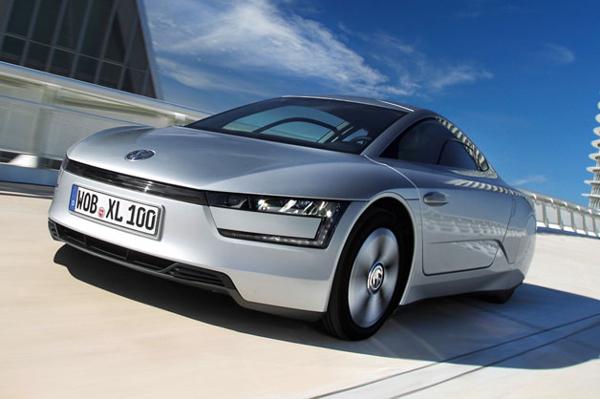 As per reports, the revolutionary XL1 two seater is the brainchild of Prof. Ferdinand Piëc and is also sometimes referred as Volkswagen 1 Litre car. The model was unveiled to the global automotive media at 2009 Frankfurt auto salon as L1 concept. The German auto major then revealed the XL1 concept at the 2011 Qatar Motor Show, where the hybrid car flaunted its unique monocoque design.

Coming to under-the-hood specifications of Volkswagen XL1 Super Efficient Vehicle, the diesel-electric hybrid model holds a 2-cylinder turbo-diesel powertrain and an electronically driven motor. The diesel engine pumps out a peak power and torque outputs of 47 bhp and 120 Nm, respectively, while the electric motor belts out highest power of 26 bhp, along with a torque of 20 Nm. Hence, the Volkswagen XL1 churns out a unified maximum power and torque equations close to 74 bhp and 140 Nm. The diesel-electric engine assembly is mated with a state-of-the-art 7-speed dual clutch transmission system. Further, XL1 can cover 0 to 100 kmph in fraction less than 13 seconds, besides boasting off a top speed of 160 kmph.

The German auto major is anticipated to begin production operations of its XL1 model at its Osnabruck manufacturing facility in Germany. Interestingly, a highly skilled team of 1,800 automotive specialists will take command of the production of Volkswagen XL1, which will be manufactured as limited number of units this year. The company is yet to comment on the pricing of its revolutionary model, but eager eyes of global car enthusiasts will be on 2013 Geneva Motor Show, for the unwrapping of Volkswagen XL1, the world's most fuel efficient vehicle.

Looking to renew your licence? Reappear for online test