TVS has unveiled its new performance concept bike named as Draken X21 at the ongoing Auto Expo 2014 event. The naked street bike which had been frowned upon a while ago, is now steadily gaining popularity in the local market. 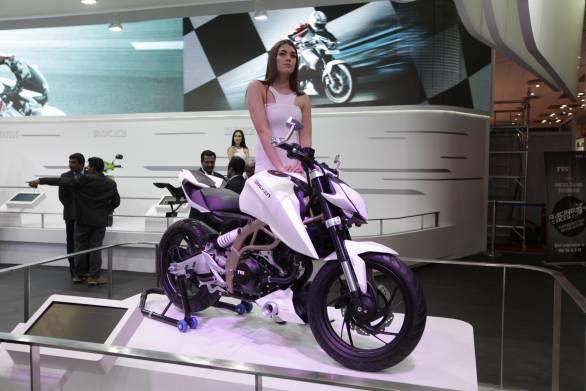 The Draken X21 concept from TVS is stated to be powered by 249.2 cc liquid cooled engine that generates power of about 38.50 bhp with 23 Nm of torque. The powerful engine is mated to a six speed gear box and per sources, churns out an impressive 33 kmpl. The exhaust outlets are just below the engine, unlike the traditional design seen on sports bikes. Wave disc with ABS technology for the front and rear makes this bike an amazing performer. The protruding rear views mirrors at the tip of the handlebars gives it an interesting look and better rear visibility. The rider seat is positioned at a lower angle, thereby giving a comfortable position for short height riders.

The bike runs on a broad set of tyres, which have been tested to deliver sheer performance under challenging circumstances. The upside down front frame and mono suspension at the rear takes care of unexpected rough patches during your transit. TVS has not revealed an exact date of launch for the Draken X21, but it is anticipated that a production version may be released soon.