The performance car list has been lean this month but we have still managed to get you out top 3 picks of the month. As expected, two of the cars spotted are German while the one is Japanese and is most probably India-bound by early next year. 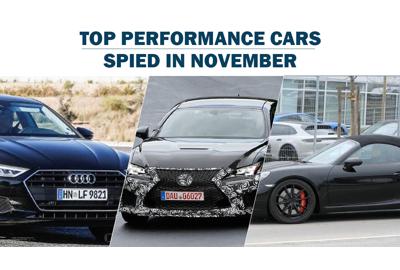 Porsche 718 Boxster Spyder
It’s the smallest car that Porsche makes, but it has turned out to be one of the most popular models as it is a modern incarnation of the original 911 from the 1960’s. This Spyder model that has been spotted is expected to be launched next year with the same specs as the hardtop version, but slightly heavier due to the roofless conversion.

Audi RS7
From an entry-level Porsche to one of the fastest four-door cars that are made by its sister company Audi. Yes, it is the RS7 and the car that has been spotted will be a next generation model with a completely new engine and cabin but an evolutionary design.

Lexus RC F
It’s Lexus’ rival to the fast and very German BMW M4 as well as the fast and equally German Audi RS4. The entire lower half has been camouflaged indicating that Lexus is working on improving the aerodynamics as well as the mechanicals to eke more performance out of the car.