Mercedes-Benz India, the domestic arm of German auto maker, has finally introduced the much hyped new E-Class sedan in the country. Industry experts are of a view that the launch of a new model will further consolidate the position of three pointed star in the Indian auto market. Termed as ‘most sought after luxury executive sedan in its segment’, the new E-Class happens to be a comprehensively modernised model with an advanced engine, new Intelligence Assistant Systems and a new designing language. 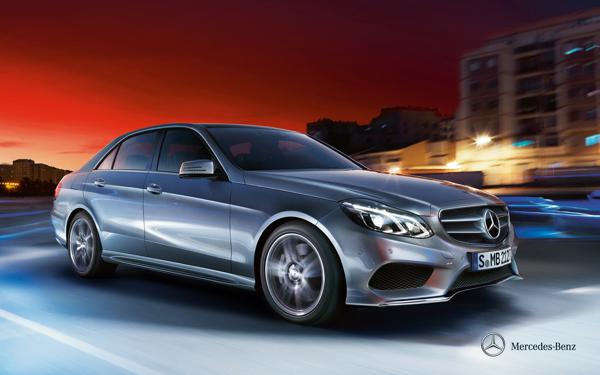 Reportedly, the new model was launched by the Managing Director and Chief Operating Officer of Mercedes-Benz India, Eberhard Kern at a price tag of Rs. 41.50 lakh for the new E 200 CGI (Petrol) and Rs. 44.48 lakh for E 250 CDI AvantgardeAvantgarde (Diesel). Interestingly, the auto maker has introduced some 100 units of limited edition of E 250 CDI, which are offered with a price tag of Rs. 49.9 lakh (all prices are ex-showroom Delhi).

Expressing his views at the launch ceremony, Kern was quoted as saying, “The new E-Class with its blend of stunning new design idiom, pioneering Intelligence Assistance Systems, exemplary safety and comfort features, luxurious appointments and best in class modern range of infotainment systems, creates a whole new benchmark in the luxury full-size segment. With more than 2000 parts and components used, the new E-Class undoubtedly is the ‘Best E-Class ever’ and reiterates Mercedes-Benz’s prowess as the pioneers of technical innovations towards safety, design, performance and comfort. Its new emotive design reinforced with the Intelligence Assistance Systems, reaffirms the E-Class’ position as the most sought after luxury sedan in its segment. The new E-Class is a completely high-tech package–and a very attractively packaged one at that.”

Interestingly, this generation E-Class is the only model to feature an star integrated in the central grille. Besides, new flowing light elements within the full LED head lights and LED tail lights are other attractions of this model. Coming to the technical figures of recently introduced E-Class, the E 250 CDI diesel is equipped with a V4 engine, which has a displacement of 2143 cc. This performance oriented drivetrain generates a peak power of 201 bhp with an alarming torque of 500 Nm. With this output, the sedan smoothly glides from 0-100 kmph within a span of just 7.5 seconds. Along with, the E 200 CGI petrol engine has a displacement of 1991 cc and belts out a power of 135 bhp with a highest torque of 300 Nm at 1200-4000 rpm. Backed by these figures, the model smoothly clocks 100 kmph from initial in a mere 7.9 seconds.

Further elaborating the significance of new E-Class in the Indian product portfolio of Mercedes-Benz, Kern further added, “The E-Class has been the most successful vehicle for Mercedes-Benz globally with more than 11 million units sold. In India too, the E-Class has been the most sold luxury sedan ever and hence, is a very important product in our portfolio, playing a vital role in the product strategy of Mercedes-Benz India. Since its introduction in India, we have sold more than 23,000 units of the E-Class, which is by far the highest for any single model for Mercedes-Benz sold in the country. 2013 is the year of offensive for Mercedes-Benz India and the launch of the new E-Class further reiterates our promise of bringing fascinating cars, presenting unparalleled luxury retail network, providing memorable brand experience and optimised cost of ownership, for the valued customers of the Three Pointed Star in India.”

Audi Q3 Sport to be launched in India before 2013 end