Honda Motorcycle and Scooter India Private Limited (HMSI), the country's second largest two-wheeler in terms of sales, has unveiled the new CB Trigger- a 150 cc bike in the domestic market. HMSI could become the numero uno bike and scooter maker in India by 2015-16 fiscal, as iterated by its Japan-based parent company Honda Motor Company. The Honda CB Trigger looks like new competition against the likes of Bajaj Pulsar, TVS Apache RTR and Yamaha FZ-Series amid others in the Indian two-wheeler space. 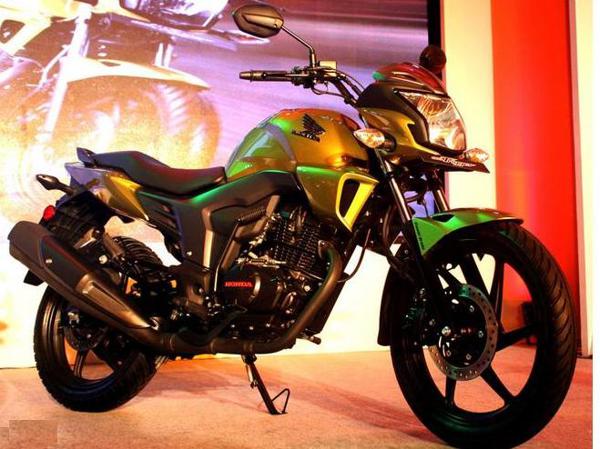 Expressing his take on the prevalent competition observed by the two-wheeler segment of Indian auto market, Shinji Aoyama, Operating Officer, Honda Motor Company, has en quoted as saying, “Today the market is almost 1.4 crore (units) in India. So, if (it) remains (at the) same level, no growth happening, we may become number one in 2015 or 16. In terms of numbers, still Hero is number one but very frankly speaking, the consolidated power, including R&D, sales network there, including many of these elements, I think Bajaj is very strong. Bajaj is very good at creating alliance.” He further added, “You will witness actually HMSI is gaining market share while Hero is losing the market share. The trend will continue.”

Speaking of engine specifications, the 2013 Honda CB Trigger comes fitted with a 150 cc motor that pumps out a peak output power of 14 bhp at 8,500 rpm, along with a highest torque of 12.5 Nm at 6,500 rpm. The CB Trigger bike is the Japanese firm's 4th model in the 150 cc segment, including the likes of Dazzler, CB Unicorn and the CBR150R. The newly unveiled Honda CB Trigger features designs and cues similar to both its CB Twister and Dazzler siblings. The stylish new 150 cc Honda model looks sporty and can definitely give its direct competition a run for their money.

As per reports, the Honda CB Trigger is the country's first bike to come equipped with a Combi Brake System (CBS) as an additional option. The CBS technology applies both the front and rear brakes simultaneously, which is immensely useful in case of a hard breaking situation. Further, using a CBS equipped bike one can reduce the braking time and effort by as much as 32 per cent. Coming to the inbuilt features, the 150 cc CB Trigger bike comes fitted with a digital instrument panel, mono shock suspension system, maintenance free battery, viscous air filter and tubeless tyres. The Japanese two-wheeler maker has claimed that its new bike delivers an impressive fuel economy of 60 kmpl.

As per reports, the 150 cc to 180 cc passenger bike segment contributes up to 10 per cent of the unified two-wheeler sales in the Indian market. At present, HMSI has 4 models in the 150 cc segment that underlines its strategy to lure middle class buyers looking to buy an affordable and fuel efficient bike. However, domestic enthusiasts have to wait a little, because the company has not yet revealed pricing and the exact launch date of CB Trigger bike in the country.

Now a black box for cars too, similar to aviation industry

BMW, Mercedes-Benz and Audi to bring collapsible showrooms to towns